The streets of Stratford, Ontario, will come alive with the sound of bells and drums this summer when two new attractions march and roll into town: aerial drummers and a mobile carillon. While these free public performances may call for an introduction, words will likely be inadequate to truly capture the energy and excitement of these special Stratford Summer Music highlights.

The drummers of Transe Express will arrive in the new Stratford Market Square for performances on July 18 and 19, bringing "a lot of fun," says Nicole Ragaigne, the company's international production manager. "Our on-the-ground performance, Les Tambours, is very interactive and invites people to laugh and dance along with our seven performers. And in the evening, the audience will have to look up 40 metres into the sky to see the same performers, plus an extra surprise."

The idea started when the French street performance duo Gilles Rhode and Brigitte Burdin found inspiration in African rhythms on an extended sojourn to the southern continent 30 years ago, says Ragaigne. "They put the first musical street show Les Tambours together and recruited a team of drummers." As the show gained popularity, Rhode and Burdin wondered how they could make it visible to thousands of people. The answer? Performers suspended in mid-air.

"This is how Mobile Homme was born – the aerial show we'll present in Stratford at 10 p.m.," says Ragaigne. "Everything is designed for delivering a spectacular aerial performance with an easy and fast setup." 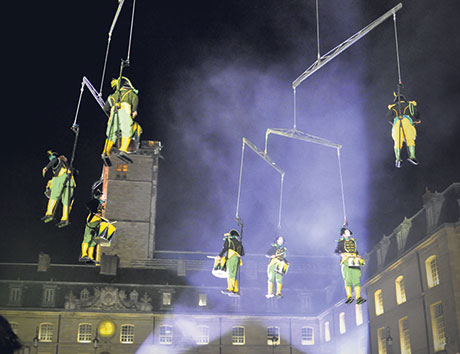 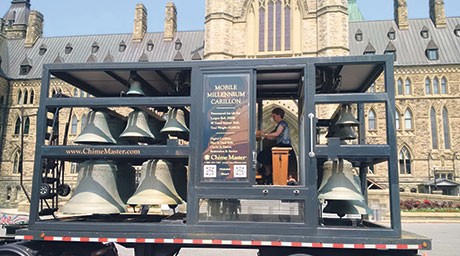 While Mobile Homme positions performers higher up above the crowd, the mobile carillon does the opposite. It brings performers who are usually in a tower closer to the audience, says Canada's Dominion Carillonneur Dr. Andrea McCrady.

"This is the second summer the [Chime Master Mobile Millennium Carillon], which has its home in Ohio, is coming to Canada, and we're thrilled to have it back," says McCrady, who usually plays the Peace Tower carillon in Ottawa.

With the instrument closer to the ground, performers are now in the vicinity of their audience, she explains. "With the mobile carillon, people can see us perform, which is delightful." The resounding bells will surely alert and attract a large number of spectators, believes McCrady, who has designed two 30-minute programs inspired by Shakespeare and titled The Bard and Bells. Joining McCrady to play a total of 14 free public recitals in the new Stratford Market Square from August 5 to 13 are some of Canada's finest carillonneurs: Gordon Slater, Roy Lee and Andrée-Anne Doane.

The carillon festival and Transe Express – plus a host of the other Stratford Summer Music highlights – are sure to cement the city's reputation as the place to be for inspiring and memorable cultural experiences.

This content was produced by Randall Anthony Communications, in partnership with The Globe and Mail's advertising department. The Globe's editorial department was not involved in its creation.