Separated by a wall and 200 years of history are two of the most unlikely next-door neighbours: a rock star and a Baroque composer whose respective gifts to the world of music were immense. Two centuries apart, Jimi Hendrix and Georg Freidrich Handel lived next to each other on an upscale London street. 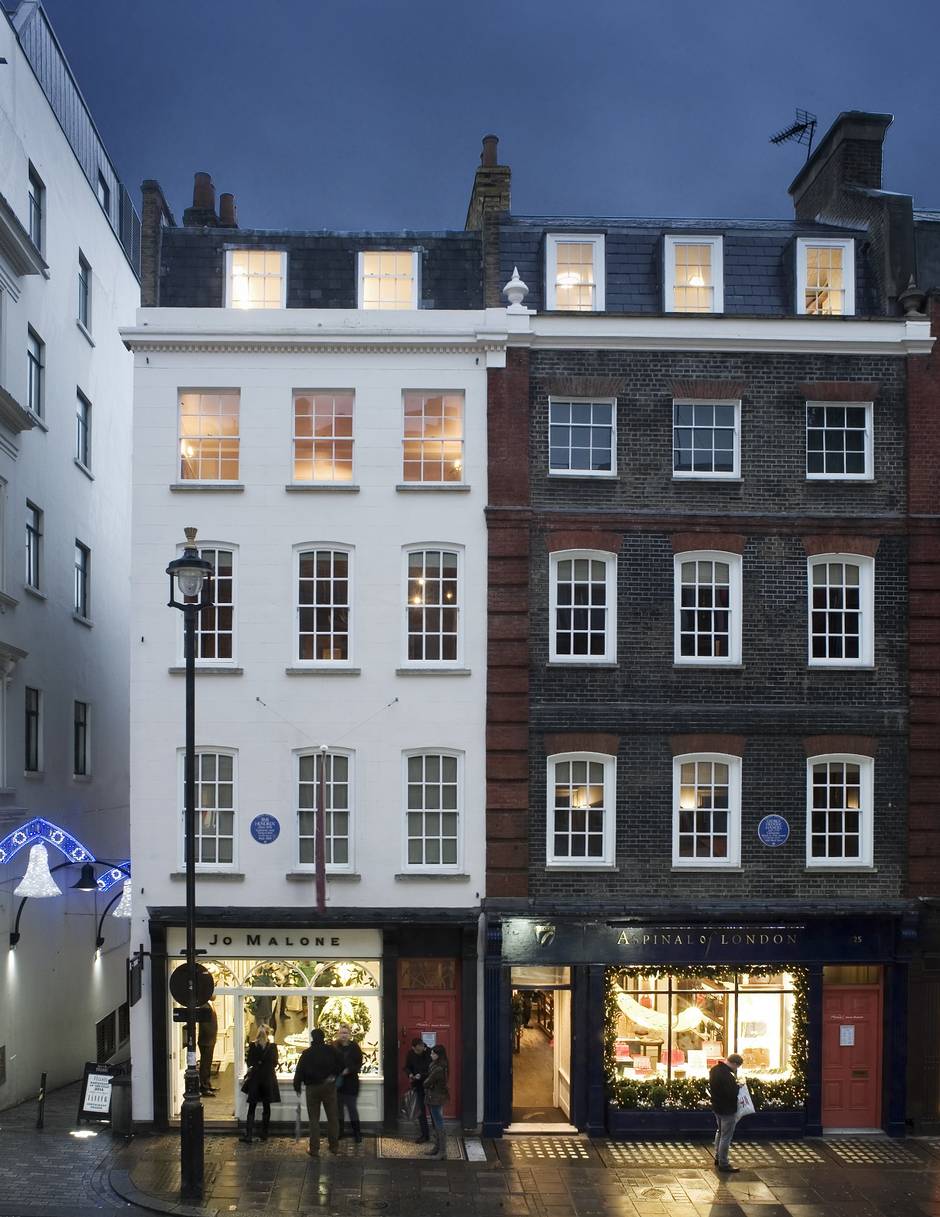 Now, the London buildings at 23 and 25 Brook Street in Mayfair that were home to both the guitarist and composer have opened their door to exhibitions exploring their diverse life and work.

The Hendrix Flat opened to the public on February 10 following a two-year, more-than $4-million restoration to the American rock star’s old top-floor flat at number 23. It follows the creation of the Handel House Museum in 2001. The two properties are now known as Handel and Hendrix in London.

Handel lived for 36 years at 25 Brook Street in the smart, upper-middle class area close to the music and artistic communities around Soho and Covent Garden. Appointed Master of the Orchestra at London’s first Italian opera company, the Royal Academy of Music, he would write 31 operas for the London stage, including Giulio Cesare, Orlando and Ariodante. 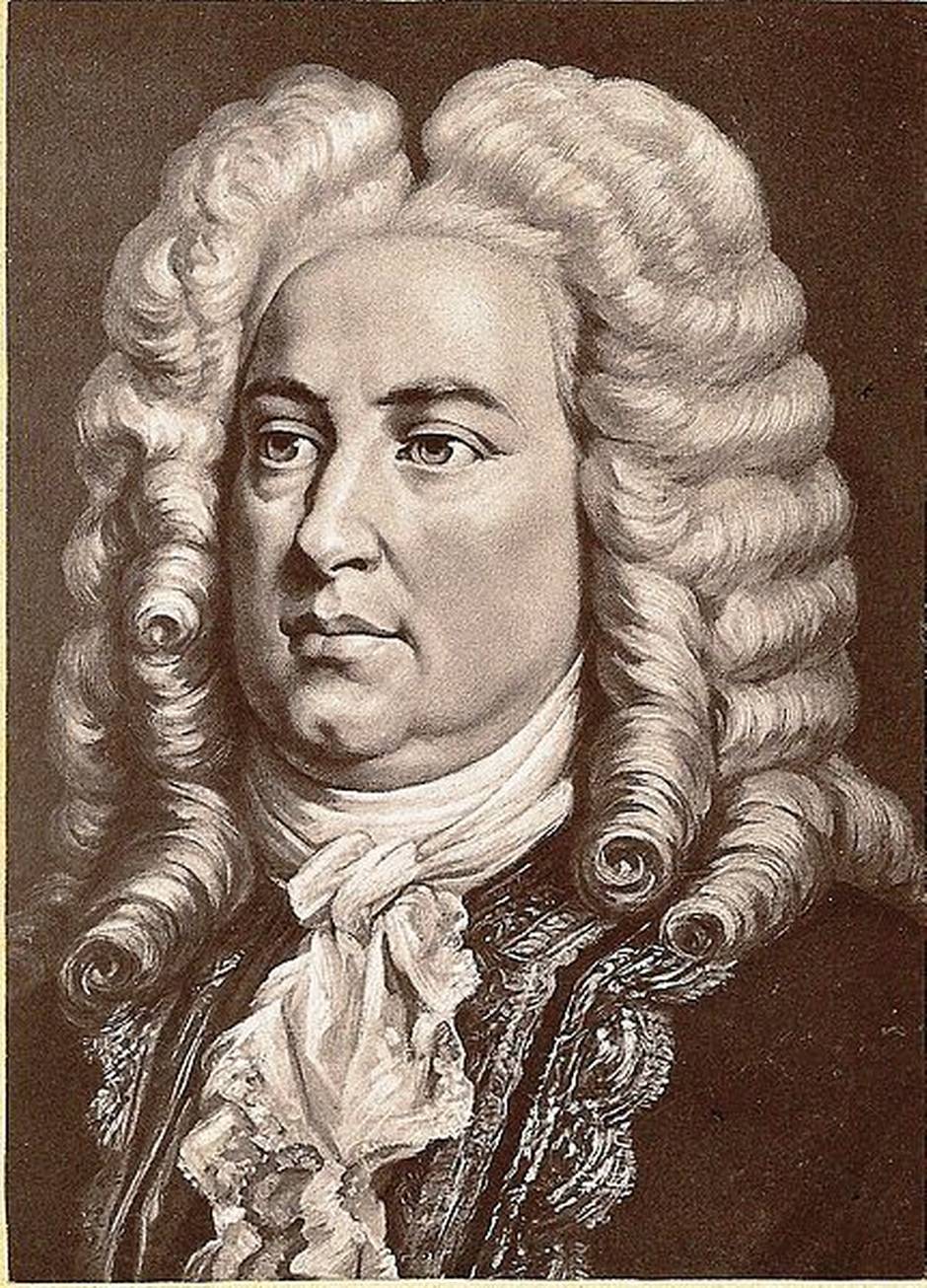 When Handel moved into the house during the summer of 1723, he was its first occupant and his annual rent was £35 (equivalent to around $9,000 in today’s money). For the period, the townhouse was on point: the basement contained the kitchens and the first floor housed the main reception and entertaining rooms. It is noted that the first room, the largest in the house, likely held one of Handel’s large instruments (a harpsichord and a house organ) and the adjoining room is believed to be his main composing room. Between August and September 1741, when public interest in Italian opera was waning, Handel composed his most famous work: Messiah.

The composer died in the second-floor bedroom in 1759 after periods of ill health at the age of 74. In his will, Handel left bequests to his servants and several charities and also bequeathed £600 for his funeral and a memorial in Westminster Abbey. 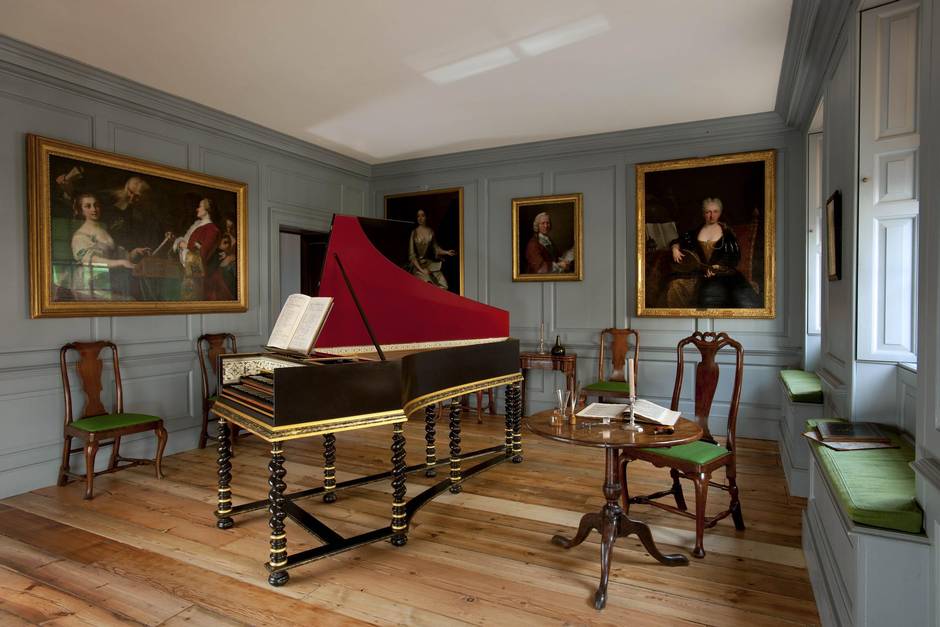 After a long period of fund-raising, the building became the Handel House Museum in 2001, with rooms restored to their Georgian furnishings and finishes, and showcasing several acquired items of fine art, manuscripts and early editions of operas and oratorios. Also included is a portrait of Handel’s Italian soprano Faustina Bordoni by Bartolomeo Nazari, displayed in the Rehearsal and Performance Room.

Hendrix’s girlfriend Kathy Etchingham found the top-floor flat at number 23 in 1968 from an advert in a London newspaper – at a rent of £30 a week. Hendrix had met Etchingham in September 1966 on the very night he first landed in London with his manager, former Animals bassist Chas Chandler. 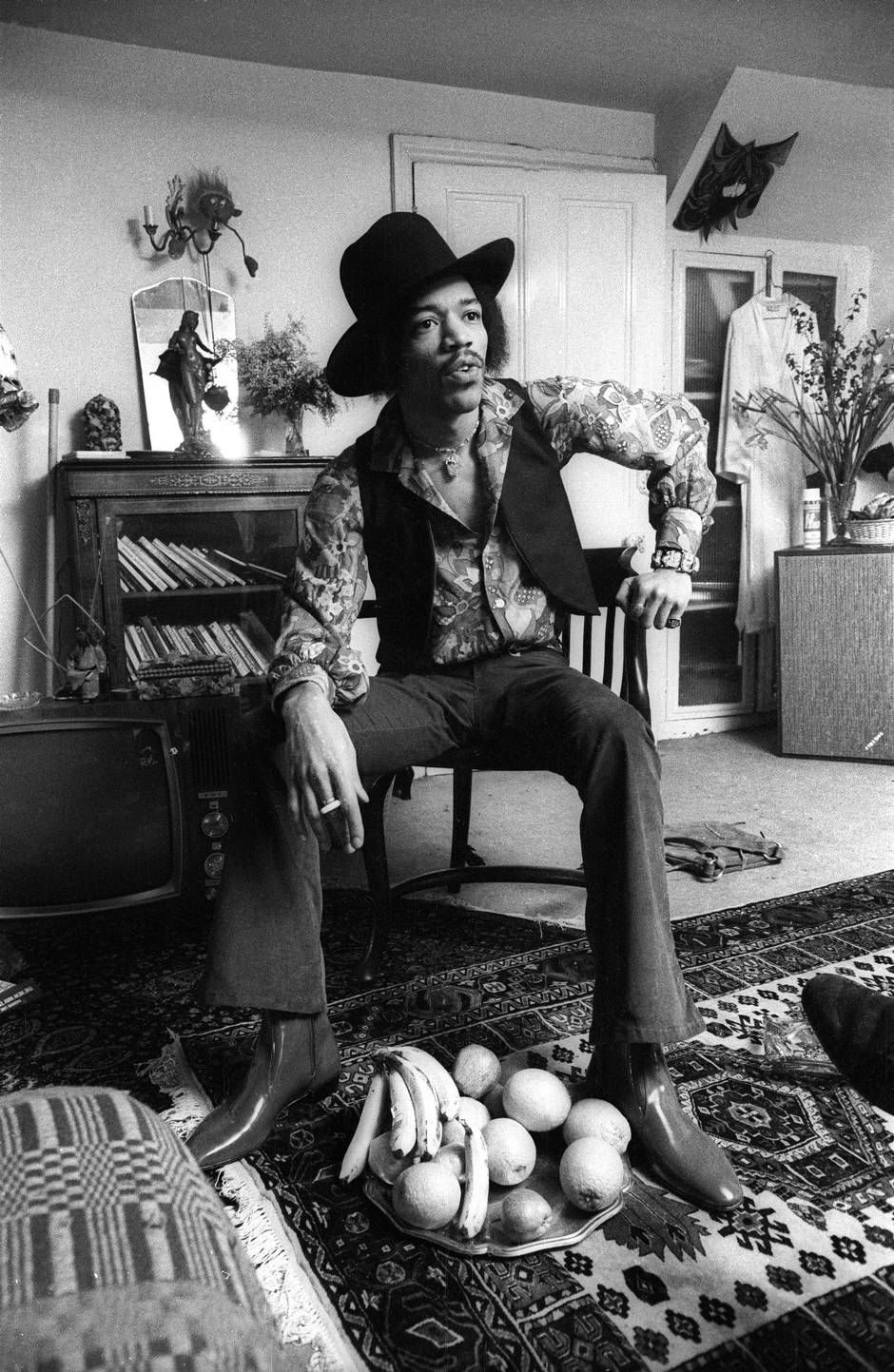 BARRIE WENTZELL
A photo of Jimi Hendrix taken in 1969.

By the time he settled into Brook Street, Hendrix had already found fame on the strength of his live performances, singles such as Purple Haze and albums including Are You Experienced?

After a year largely spent recording and touring in the United States, the Brook Street apartment became his home base for giving interviews, doing photo shoots, writing new songs and prepping for upcoming gigs at Royal Albert Hall. Hendrix spent his days decorating the flat to his own Bohemian tastes: purchasing carpets and cushions from the nearby John Lewis department store as well as sourcing eclectic knick knacks from Portobello Road Market. 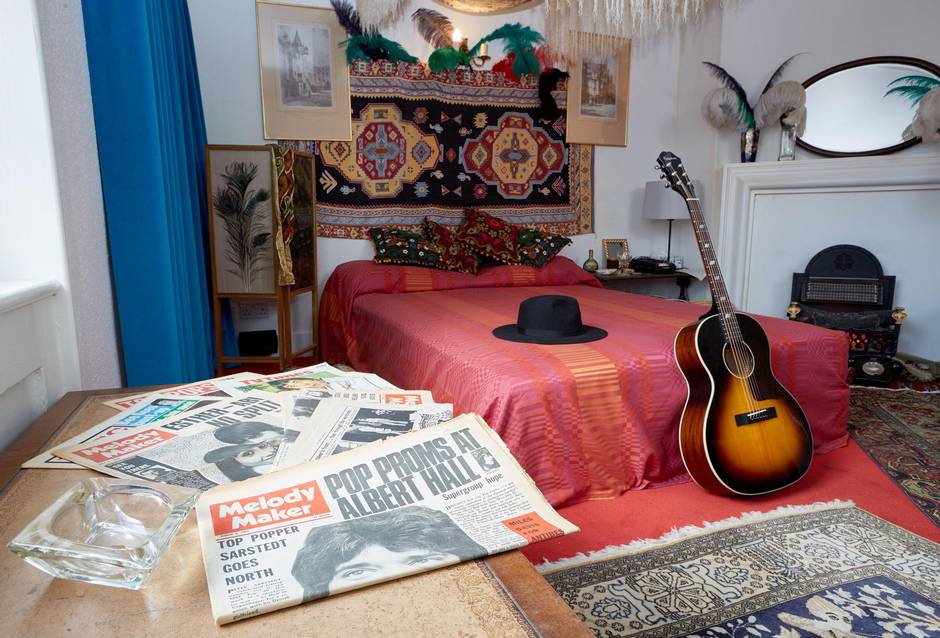 By nights he wandered the nearby Oxford Street clubs and music venues like the legendary Marquee and the Speakeasy that were central to the London music scene of the late ‘60s. The rock star considered this abode the first “real home of his own” − and on learning that Handel once lived next door, he and Kathy went to the One Stop Record Shop in South Molton Street to buy some of his works, including Messiah and Water Music. Some critics have declared that his own recordings have similar symphonic qualities.

His stay in the apartment was not to last long. Hendrix died in in 1970, not in the abode but at a London hotel.

The flat had in recent years functioned purely as an administrative and office space for the Handel House, until public interest encouraged the museum to turn it into a short exhibit Hendrix in Britain in 2010, before making it a permanent fixture this year. 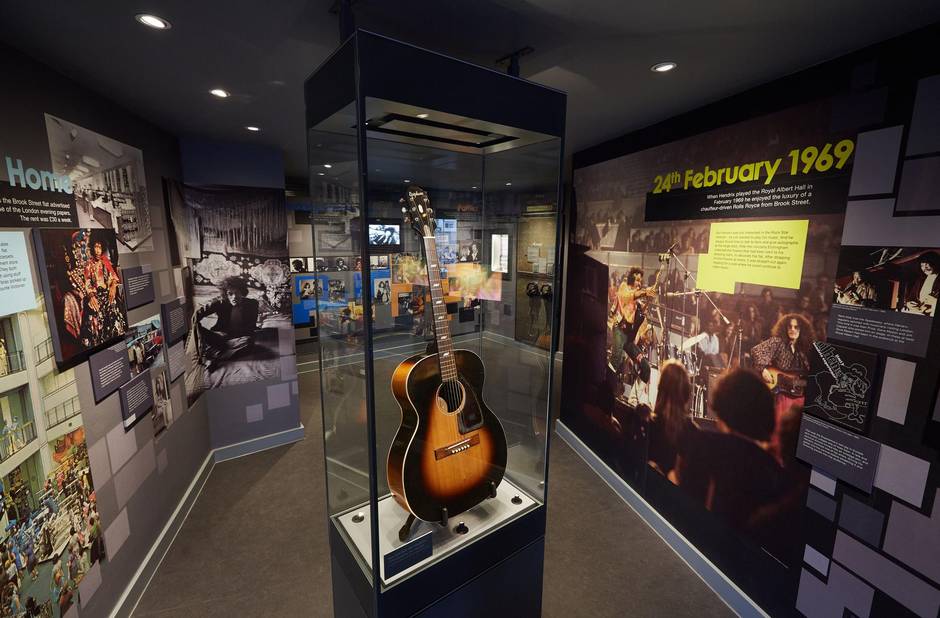 The museum has sourced many pieces of Hendrix memorabilia, including original work, film clips, early recordings, guitars and clothing, notably the broad-brimmed felt hat and patterned orange velvet jacket – that are immediately recognizable to fans as part of his on-stage attire. The apartment’s décor was reconstructed with the help of English photographer Barrie Wentzell’s snaps, who had famously shot Hendrix jamming in the bedroom with The Beatles’ George Harrison.

Neither Hendrix nor Handel were from London, or even born in Britain, but the buildings they inhabited now stand as a permanent monument to their indelible impact on the city’s cultural heritage.

Hendrix and Handel’s homes both sport the famous Blue Plaques that are used to denote the home of a famous resident. The first plaques were erected in London in the 19th century, and the capital now has over 900. English Heritage, which administers the scheme, has hundreds more across Britain.

Here are some other blue plaques worth discovering:

The Who, Leeds University refectory, Leeds (site of Live at Leeds concert album, 1970)

VisitBritain invites you to discover the rich history and heritage of Britain. For ways to save on your next visit to Britain, download a free copy of the Great Value Britain Guide.

This content was produced by The Globe and Mail's advertising department, in consultation with VisitBritain. The Globe's editorial department was not involved in its creation.