We waste nary a millisecond on our first day. A shuttle bus whisks us from the Fairmont Chateau Whistler to the nearby Whistler Sliding Centre, site of the bobsled, luge and skeleton events at the 2010 Winter Olympics. The centre's "Public Skeleton" experience prepares us for two trips down the 500-metre-long Maple Leaf track with a half-hour orientation session and all the requisite gear: gloves and a helmet with face shield. What it can't prepare us for is the minute of exquisite terror that lies ahead.

Skeleton was reintroduced to the Olympics in 2002 after a 54-year hiatus. It takes place on the same track as the luge, but instead of riding feet-first on their backs racers fly down face-first on their stomachs. The overarching message of the orientation is that we should lie flat and motionless on the sled – "like a sack of potatoes," our instructor repeats – and under no circumstances should we roll off or ride it like a crazy carpet.

I watch as Sliding Centre staff gently release the first two novice skeletoners from the starting gate, which is a third of the way up the full Olympic course. Their top speeds and track times blare from the PA system as I settle onto the sled. Someone asks if I'm ready, I nod...and…I'm off! 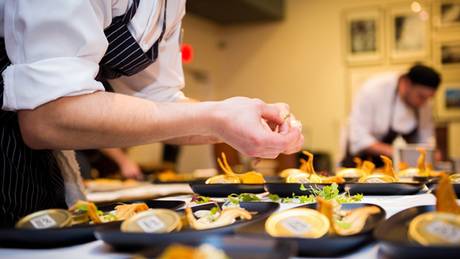 A bespoke winter vacation in Whistler, B.C. offers plenty of indoor adventure too, such as enjoying the labours of the kitchen at the Bearfoot Bistro.
TOURISM WHISTLER/MIKE CRANE

The first turn is almost leisurely, but by turn three of five, the skeleton ride feels like a cross between astronaut training and the wickedest roller-coaster on Earth. With my chin a couple inches above an icy blur and the rest of me held in place by nothing but gravity – the force of which is tripled in the turns – 93.62 km/h, my top speed, feels a lot faster than it sounds.

As the sled comes to a halt my exhilarated brain can only consider one thing: Run No. 2.

The difference: I know what to expect. I don't clench my shoulders and teeth as much. My eyes stay open the whole time, and I even feel a strange kind of oneness with the track as I surpass 97 km/h. I shave more than three seconds off my first run, finishing in 30.45. Would it be enough to claim guys' getaway gold?

As with other bespoke experiences, our activities are seamlessly combined with relaxation and refreshment. Après-skeleton consists of innovative beer and whiskey pairings at the Dubh Linn Gate pub, while a culinary excursion with Whistler Tasting Tours keeps the party moving from one hot spot to the next. For dinner, there's pan-seared Kokanee salmon at Elements tapas restaurant. For dessert, we sample warm berry crumble from Caramba! And for the heck of it – we're on vacation, after all – we finish off the evening with B.C. ice wine-infused truffles at Rogers' Chocolates. 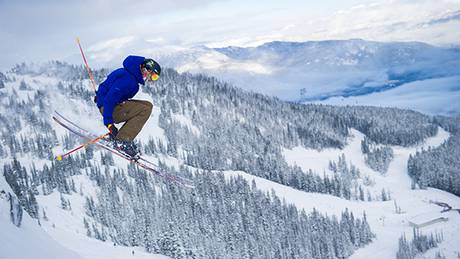 On the ski slopes of Whistler Blackcomb you can spend hours gliding through the fresh powder blanketing the mountainsides.
TOURISM WHISTLER/MIKE CRANE

Day 2 begins in more conventional fashion: On the ski slopes of Whistler Blackcomb. We spend six thrilling hours gliding through the three inches of fresh powder blanketing the mountainsides, but the first-time visitors in our group say they are most impressed by their 11 minutes on the Peak 2 Peak gondola, which crosses Fitzsimmons Creek at a record-setting 436 metres.

After some lively après at the Garbaldi Lift Company bar, we continue to make good use of our snowy surrounding on an evening snowmobile tour with Canadian Wilderness Adventures. As we climb the slopes of nearby Sproat Mountain, our headlights illuminate countless fat snowflakes as they plunge the dramatic alpine landscape ever deeper into wintry splendour.

Then comes the Barefoot Bistro's sabre experience – a tradition that dates back to the Napoleonic era, when cleanly slicing the top off a bottle of Champagne meant good luck in the battle to come.

After downing a few flutes we don Canada Goose parkas and hit the Ketel One Ice Room. At minus 32 C, it's the world's coldest vodka-tasting venue. Then we embrace our carnivorous sides in refined fashion with a five-course tasting menu encompassing Turtle Valley bison striploin, Yarrow Meadows duck breast, and Opal Valley rack of lamb.

As we dive into decadent popcorn ice cream bombes, the "official" results of the skeleton are revealed. I raise my arms in triumph, salute my fellow racers, and sip from a celebratory crystal chalice. When it comes to being a sack of potatoes, I'm going home a champion.

Adam Bisby is a Toronto-based travel writer and founder of the award-winning Mostly Amazing blog.

Produced by Globe Edge Content Studio. The Globe's editorial department was not involved.