The first major event in the calendar of the Royal Conservatory of Music (RCM) is the result of a happy accident. The New Canadian Global Music Orchestra, initially assembled in 2017 for a one-off performance for Canada's sesquicentennial celebrations, has rebranded as KUNÉ – Canada's Global Music Orchestra and is scheduled to hold a record-release party at Koerner Hall on April 7.

"It was supposed to be a one-night stand – a fun pet project to do for Canada 150," says Mervon Mehta, the RCM's executive director of performing arts who conceived the ensemble.

"We got some funding from Canada Council [for the Arts], but before we even did the show, we had the Hillside Festival in Guelph and Sunfest in London and the NAC [National Arts Centre] and others wanting us to tour. They had not even heard the band play.

"Then the Banff Centre invited us to come out and make a record and do a residency out in Banff. Afterward, we did a show in Montreal for the Mundial Festival, and agents and managers kept calling, which is very satisfying to see. People think it's the right time for this kind of a project."

The 13-piece KUNÉ, which recently signed label and management deals with Universal Music Canada and Opus 3 Artists, respectively, shares the bill with their producer and musical director David Buchbinder's other ensemble – Odessa/Havana, formed a few years ago with local and Cuban pianist sensation Hilario Durán.

"It's two fairly large world-music, cross-cultural, multicultural ensembles on the same bill, so it should be a lot of fun," notes Mehta.

From May 22 to 27, the 21C Music Festival returns for its fifth year with a repeat visitor, the legendary Kronos Quartet, who are teaming up with Los Angeles songwriter Jherek Bischoff for a unique pairing at Koerner Hall.

"He's writing some new pieces for himself as a bass player and singer with Kronos," Mehta explains. "Kronos is also bringing several pieces of their Fifty for the Future project, where they commissioned 50 composers to write new string quartets. Those quartets are then made available free of charge [to] every quartet in the world to download and work on. It's their legacy project."

Rounding out 21C are evenings of Stephen Sondheim solo piano music with Anthony de Mare (May 24, Mazzoleni Concert Hall; May 25, Temerty Theatre); chamber orchestra A Far Cry with pianist Simone Dinnerstein, premiering a new Philip Glass work (May 25, Koerner Hall); and a performance by Katia and Marielle Labèque (May 27, Koerner Hall). On May 26, at Koerner Hall, pianist Dinuk Wijeratne and clarinetist Kinan Azmeh perform an RCM-commissioned original, followed by a performance by vocal ensemble Vox Clamantis with Maarja Nuut and Hendrik Kaljujärv for a 100th-birthday celebration of Estonia. As an ending to the 21C festival, the commissioned Zipangu! makes its debut with the New Music Concerts String Orchestra (May 27, Mazzoleni Concert Hall). 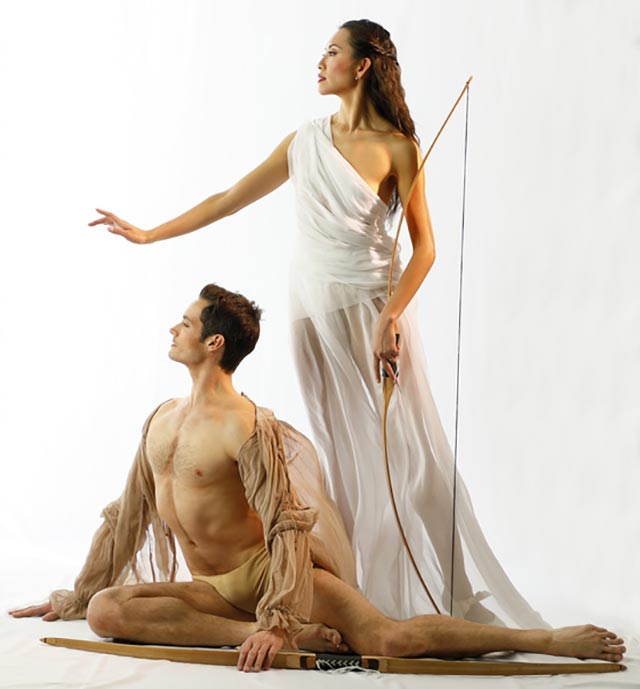 Dancers Tyler Gledhill (left) and Juri Hiraoka perform in Opera Atelier's production of The Return of Ulysses, one of the earliest operas ever written. (Photo Credit: BRUCE ZINGER)

"This is one of the earliest operas ever written," says Pynkoski. "There's no such thing as a Monteverdi orchestra. The instruments have to be brought in from all over the world because they're so rarified. You have sackbuts [early-Renaissance-era trombones] and chitarrones [period lutes], and the moment the opera begins, you feel like you've been picked up, carried and dropped into another world."

Although the 2018 Toronto Summer Music Festival doesn't start until July 12, the theme of Reflections of Wartime, commemorating the 100th anniversary of the end of the First World War, is yielding some surprises.

Moscow's Borodin Quartet appears at Koerner Hall on July 12 to kick off the program with two homeland masterpieces, and 11 days later, on July 23, the Walter Hall hosts a concert titled Sounding Thunder, devoted to Francis Pegahmagabow, an Ojibwa sniper and decorated Canadian military officer in the First World War.

Ben Heppner, the Toronto Mass Choir, pianist couple Angela Cheng and Alvin Chow are also scheduled to perform at the festival, which runs until August 4.