Ottawa's National Arts Centre is ushering in the new season with a tsunami – specifically, the Indian Ocean tsunami of 2004, one of the world's worst natural disasters, which devastated a wide swath of coastal communities in at least 14 countries. That immense tragedy, which took more than 225,000 lives, is the subject of Asian-Canadian playwright David Lee's carried away on the crest of a wave.

His ambitious play – winner of the 2015 Governor General's Literary Award for English-language drama – explores the lives thrown together and changed forever by the cataclysm. By turns tragic and comic, dark and hopeful, carried away is a suitably sprawling work being given an equally epic-sized production by the NAC.

"It's such a feat of the imagination and grand-scale thinking," notes Jillian Keiley, artistic director of the NAC's English Theatre. "I believe it deserves to be seen on a large stage."

Running from March 23 to April 1 in the 897-seat Babs Asper Theatre, the play has had few productions since its 2013 debut at the Tarragon Theatre in Toronto. That may be due partly to the magnitude of the narrative and partly to the complex feelings evoked by Yee's tsunami tales. "It's not an easy play [to watch]. I won't pretend otherwise," says Keiley. "But I was so moved when I first read it. Just reading the text, I found myself in tears."

It is also timelier than ever, as the world is increasingly battered by extreme weather, and Canadians may no longer feel as distant from such tragedies in far-off places as they once did. 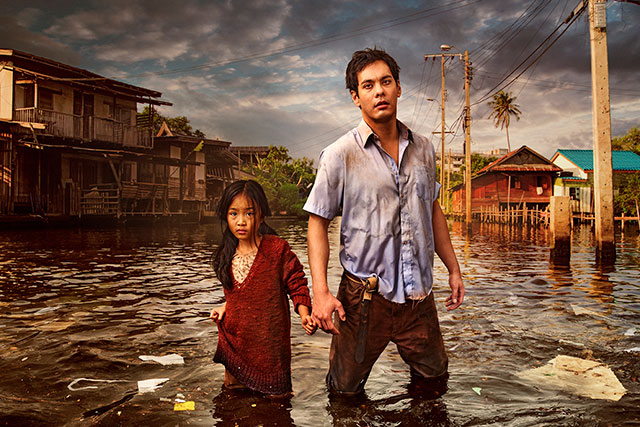 The 2004 tsunami that devastated parts of Southeast Asia inspired playwright David Lee to write the award-winning carried away on the crest of a wave. (Photo Credit: MATT BARNES)

The show is directed by Kim Collier, whose wonderfully imaginative multimedia productions for the Electric Company Theatre in Vancouver garnered her the 2010 Siminovitch Prize, Canada's largest theatre award. "I'm a huge fan of Kim's and I wanted something that could really show off what she's capable of," says Keiley. "I thought [Kim] and the play were a great match."

The designer is Camellia Koo, who created a striking water-filled set for the Tarragon staging.

Yee's play is one of two Canadian productions getting the big-theatre treatment from the NAC, the other one being Up to Low – a rousing adaptation of Brian Doyle's young adult novel about a motherless boy coming of age during a colourful road trip in 1950s Ottawa Valley. Adapted for the stage and directed by Janet Irwin, the story was originally staged independently in Ottawa at a tiny venue during the 2015 Magnetic North Theatre Festival. "It was another Canadian play [when] I thought, My God, this needs a big canvas," recalls Keiley. "I was thrilled by it. It's a beautiful piece of writing."

Beloved local author Doyle is Ottawa's answer to Judy Blume, she says. "He's got such an eye for the deep humanity in people – all from a kid's point of view." Irwin's adaptation includes a live musical score composed and performed by Ian Tamblyn. Up to Low plays at the Babs Asper Theatre (May 1–19).

Meanwhile, the NAC's dance card hosts an acclaimed Canadian ballet of a horror classic. The Royal Winnipeg Ballet brings a revival of its acclaimed Dracula to Southam Hall (April 12–14). Choreographed by Mark Godden to the music of Austrian composer Gustav Mahler, this story ballet – first presented in 1998 – revels in the creepy creatures and Gothic atmosphere of Bram Stoker's seminal vampire novel. 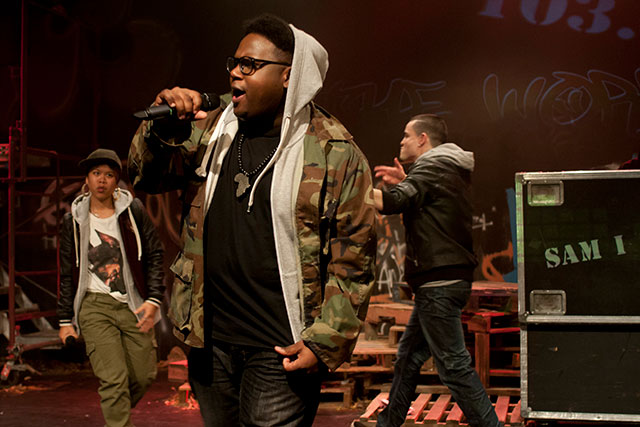 Tristan D. Lalla appears in Sal Capone: The Lamentable History of, an urban musical drama shaped by tensions between police and people of colour. (Photo Credit: A. LANTHIER)

On May 5, Australian troupe Circa performs, combining circus acrobatics with contemporary dance in Opus, an exhilarating work choreographed to the music of Russian pianist and composer Dmitri Shostakovich, played live by the Debussy String Quartet from Lyon. Geared to lovers of dance hybrids is the feverish, rock-infused Some Hope for the Bastards by Montreal-based celebrated choreographer and musician Frédérick Gravel (April 20–21).

The work of another Quebecois dynamo, playwright Steve Gagnon, is featured at the NAC's French Theatre with the touring production of Fendre les lacs (May 9–12). Gagnon also directs his dark poetic drama of rural ennui, which premiered in Montreal in 2016. From further afield the tg STAN (Stop Thinking About Names), a theatre collective based in Antwerp, returns with another bold updating of a classic – La Cerisaie, the troupe's abstract modern-dress take on Anton Chekov's The Cherry Orchard (April 11–14).

The NAC Orchestra has a busy spring season ahead as well. Two veteran masters of the keyboard, Louis Lortie and Emanuel Ax, will be joining the orchestra for concerts. Lortie performs Mozart's Piano Concerto No. 24 (April 18–19), while Ax takes on Beethoven's Piano Concerto No. 5, a.k.a. "the Emperor Concerto" (May 23–24). In the rising-star department, young Italian pianist Beatrice Rana makes her NAC debut with Brahms' Piano Concerto No. 1 (April 4–6).

Those leaning more toward hip hop can turn their attention back to the English Theatre and its presentation of Sal Capone: The Lamentable Tragedy of. Written by Afro-Canadian actor-playwright Omar Newton, this ripped-from-the-headlines urban musical drama focuses on a hip-hop trio grappling with the police-shooting death of their DJ.