Canadian art has, not so quietly, become a big deal at home and abroad. The international art world has connected with celebrated painters such as Lawren Harris, the subject of a major retrospective – "The Idea of North: The Paintings of Lawren Harris" – at the Hammer Museum in Los Angeles in 2015. In New York, four paintings by abstract painter Jack Bush sold for a combined total of almost US$1.6-million, including buyers' premiums.

Rosedale, Peter Doig's depiction of a Toronto snowfall, sold for $28.8-million last year, while one of his landscapes, The Architect's Home in the Ravine (1991), was the main attraction at Sotheby's Contemporary Art Evening Auction in London earlier this month.

But in the early 20th century, it was modernist James Wilson Morrice who was Canada's first internationally acclaimed art star. An exhibition at the National Gallery of of Canada (NGC) – "James Wilson Morrice: The A.K. Prakash Collection in Trust to the Nation" – aims not only to show this modernist artist in the context of his contemporaries, such as Robert Henri and Henri Matisse, but also to tell the tale of Toronto-based art collector A.K. Prakash's dedication to shedding light on the life of Morrice.

James Wilson Morrice (1865–1924), who was born into a prosperous Presbyterian family in Montreal, moved to Paris to study. Upon his arrival, Morrice demonstrated a singular genius for capturing the city's swirling social life. In 1909, the leading French critic of the period, Louis Vauxcelles, declared Morrice as the best North American painter on the global stage since the death of James Whistler.

Although he moved easily in Parisian art society, Morrice was a very private man. Plagued by alcoholism, he was a restless spirit. "His art does not belong to just one continent," notes Katerina Atanassova, NGC's senior curator of Canadian art. "Morrice did not embrace the idea of nationalism in art."

With Paris as his base camp, he travelled extensively in Europe, favouring stays in Venice, and returning to Canada to visit and paint, and he also worked in Trinidad, Cuba and North Africa. He never stopped moving, capturing the colours and atmosphere of various urban scenes on canvas as well as in intimate, preliminary oil sketches on small wooden panels called pochades. 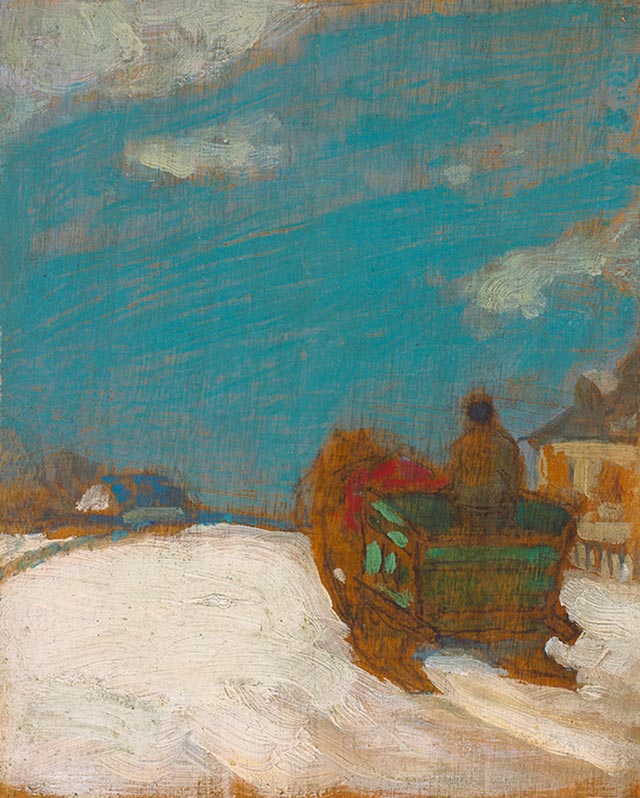 While Morrice may have led a transient life (Matisse described him as "always over hill and dale, a little like a migrating bird but without any very fixed landing place"), his ability to connect the viewer to a moment in time, using only the most essential elements – light, colour and simple pencil lines – is one of the factors that drew Prakash to his work. Prakash also noted that even in the artist's landscapes, the viewer gets a sense of the life that inhabits them. "There is a human story there as well," adds Atanassova.

Like Morrice, Prakash was an émigré, leaving his home in India at age 15 and settling in Ottawa in the late 1960s. He raised a family and worked as a public servant, acting as an advisor to prime ministers Pierre Trudeau and Brian Mulroney. Gaining an appreciation for art, specifically fin de siècle Canadian art, Prakash began collecting Morrice in earnest in the 1980s.

"Ash is a remarkable fellow," says Thomas D'Aquino, chairman of the board of directors of the National Gallery of Canada Foundation. "It takes time and scholarship. The fact that he was able to amass this collection while working as a bureaucrat is extraordinary."

In the 1990s, Prakash left his government gig to focus on collecting art and to serve as an advisor to those who shared his passion. His talent for research and making connections is one of the reasons his personal Morrice collection is so important. Not only is he an avid promoter of Canadian art – he helped organize the first major show of Group of Seven works in Europe at the Dulwich Picture Gallery in London in 2011 – but his research into Morrice's personal life and the provenance of his work has also greatly expanded what we know about the artist.

Prakash spent more than 35 years building the collection – the last large collection of works by this artist in private hands. In 2015 he gifted 50 artworks – oil paintings, pochades, watercolours and a sketchbook – to the NGC. These works, including highlights such as The Pink House and Canal in Venice, comprise the basis of "James Wilson Morrice: The A.K. Prakash Collection in Trust to the Nation."

The exhibition, which opened in October 2017, has been a hit with gallery goers because it presents Morrice's work in the context of his life and times and also reveals Prakash's passion for collecting his paintings, which is something Atanassova understands. "Morrice tends to become an obsession for those who discover him," she says, "and I seem to have fallen in that path as well."

Both Atanassova and D'Aquino describe Morrice's legacy as "enduring." Morrice was an influence on members of the Group of Seven and his works were the centrepiece of the Canadian Pavilion at the Venice Biennale in 1958. And because they evoke an emotional response, his works remain an inspiration to contemporary artists and audiences. That's the driving force behind the NGC's desire to share Morrice with the rest of Canada and the world.

And true to the artist's restless nature, "James Wilson Morrice: The A.K. Prakash Collection in Trust to the Nation" will hit the road in April, travelling to the Beaverbrook Art Gallery in Fredericton (April 12–July 2), the Art Gallery of Alberta in Edmonton (July 20–October 7) and the Musée d'art de Joliette, in Joliette, Que. (February 2–May 5, 2019).

According to D'Aquino, museums outside of North America have also expressed interest in the show. He hopes that the tour will position Morrice in his rightful place in the pantheon of post-impressionist artists, as well as unearth more information about his life.

Prakash too is excited to see how the tour will open new doors for Canadian art. "All of these initiatives lead to an archeological journey," he says,  "which gets Canadian art on the global stage, where it belongs."

And although his collection is now out in the world, his own collecting days are far from over. Says Prakash, "It's a lifelong passion."