The Canadian National Institute for the Blind is looking pretty spry as it celebrates its 100th birthday this year.

Long established as a leader in advocating for and providing services to Canadians who are blind and partially sighted, CNIB is energetically building on its past toward new goals in its next century.

The organization was created in response to the needs of returning soldiers blinded in the First World War – which marks the 100th anniversary of its end in November – and the ocular injuries mainly caused by flying glass shards in the Halifax explosion in 1917, which remains the largest mass blinding in Canadian history.

Then, CNIB set itself on a mission to give blind and partially sighted individuals the skills and tools to live productive lives. In the early days, that was done with education and workshops and the emerging technology of the day.

Going forward, president and CEO John Rafferty says CNIB wants to unleash the latest technology, such as apps that identify objects or read text aloud, to boost the number of people with sight loss in the workforce – a timely goal as many companies fret about labour shortages.

"Canadians who are blind or partially sighted have sat in the mid-30 per cent employment rates for decades and decades and, in today's world of technology, there is no reason why we can't make a significant improvement in that," Mr. Rafferty says.

One of the problems, he says, is 50 per cent of Canadians who are blind or partially sighted don't have access to technology that could help them. Many don't know it exists.

CNIB is no stranger to taking on tough challenges. In fact, the very creation of the institute was an innovation at a time when there were few services for the blind in Canada.

"For blind people in the early 20th century, it was quite dismal," says Jane Beaumont, CNIB's archivist. "If they didn't have private means, poverty, lack of employment and even education was the norm. People didn't have much awareness of blind people because if you were blind, you mostly stayed at home or were kept at home."

One of the most significant resources was the Canadian Free Library for the Blind, which was founded before the war and enabled blind Canadian adults to find embossed type books somewhere else than a school for the blind. There was also a progressive school in Halifax and some activity in Ontario and Quebec but little else.

"Basically, the attitude was that if you were blind, you couldn't do anything," Ms. Beaumont explains.

However, a group of seven members of the Canadian Free Library's board – five of them blind and including two veterans – thought more could be done as the soldiers returned. They decided to set up CNIB in 1918 to help all in need, no matter how they lost their sight. 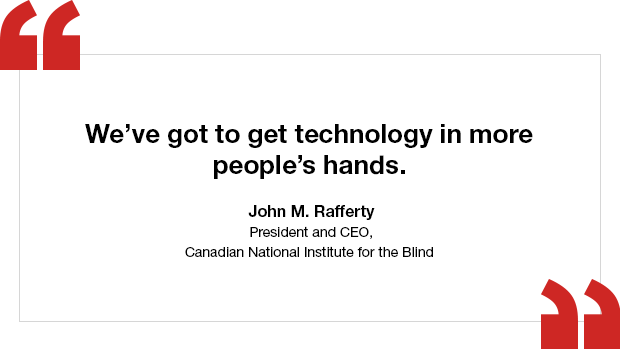 Ms. Beaumont says the original mission of CNIB was to improve the lives of people with sight loss by providing skills for life and employment, as well as library services. Workshops were established and shops were set up to help them sell their wares.

"There were really no social services so CNIB was all there was for people to learn how to be independent and self-sufficient," Ms. Beaumont says.

National offices sprang up, training courses expanded. In one major advancement in the 1950s, CNIB working in close co-operation with the department of ophthalmology at the University of Toronto led to the founding of Eye Bank of Canada, which collects, processes and distributes donated human eyes and tissue for sight-saving transplants.

While expanding the use of technology is part of CNIB's plan for the future, the organization is no stranger to high tech. In 1956, the institute helped sponsor a course for blind computer programmers. The 1990s saw the introduction of software programs that enabled blind or sighted volunteers to translate French or music in braille.

And two years ago, during the Annual International Technology and Persons with Disabilities Conference in San Diego, CNIB and international partners introduced the Orbit Braille Reader, a device that will allow a person who is blind or partially sighted to read the contents of a display, like a computer, a text line at a time as a line of braille characters.

"In the '30s and '40s, it was about people's rights and getting access to voting and a number of other things. It's always been innovation."

While technology will be a major focus for CNIB's future, the organization will also continue its efforts in encouraging and doing vital research and advocacy for Canada's blind. Most recently, it urged the Senate to strengthen accommodations for sightless travellers in the Transportation Modernization Act. CNIB supports the legislation, particularly an airline passenger bill of rights that would address the needs of people with disabilities. Canadians with sight loss have difficulties with air travel, from booking tickets to navigating airports, accessing attendant call buttons and having enough space for guide dogs.

CNIB has made great strides over the past 100 years, and archivist Ms. Beaumont says the original founders of CNIB would be proud. "They'd be very proud of how what they created has evolved and how strong we are nationally. "We really mirror the social history of Canada."