Jenni Derksen's infant son Benji wasn't making a lot of eye contact, but she didn't think much of it at first. After all, he was still a baby. But when he was three months old, she noticed his eyes began to move "back and forth like a pendulum."

That prompted a visit to a pediatrician who confirmed her son had nystagmus (involuntary eye movements that may result in reduced or limited vision) and referred her to a pediatric ophthalmologist. Her son was diagnosed with albinism – a congenital disorder characterized by the complete or partial absence of pigment in the skin, hair and eyes. It's often associated with several vision-related defects and a susceptibility to sunburn.

"It's not something any parent wants to hear," explains Ms. Derksen, "but we knew we could help him live a happy life."

That didn't stop the Didsbury, Alta., mother of three from worrying about her youngest son's future. "We still had and have our fears. Would he make friends? Would he ride a bike? Will he find a hobby or play sports? Will he ever drive? How will he find a job? Will he find a soulmate?

"The ophthalmologist did tell us that he did have some pigment in his eyes and that he would not be on the highest end of vision loss, but that it would be hard to gauge how much he can or can't see until he is old enough to talk," she explains. "We are still waiting on an official genetic diagnosis of the type of albinism. Benji may have a type called ocular albinism, which mostly affects the eyes and less so the hair and skin."

The reduced visual acuity may result in difficulty in school, such as problems reading a chalkboard or playing ball sports, and when older, the ability to drive. Many with albinism are either farsighted or nearsighted, and have a sensitivity to light and glare.

For Ms. Derksen and her husband, Russell, the next step was to look for information and support, which they found at the Canadian National Institute for the Blind (CNIB), who visited their home when Benji was about five months old. "They educated us on how to protect him from the sun and eye fatigue. They taught us what to expect from him and how to teach him in the early years," Ms. Derksen says. "At each stage the CNIB gave us games to help him reach milestones. Benji achieved typical baby and toddler milestones later than the average child and is a determined little guy."

CNIB also informed the family about a local pre-kindergarten program, which had a teacher for the visually impaired, and connected them with CNIB early childhood programs. "Sandy Summers {program lead for early intervention with the CNIB in Alberta} has been our rock," says Ms. Derksen. "I have asked her so many questions: Is this normal? Can he try this? What should I do? She responds to all of these with loving and careful answers."

Ms. Summers is well-positioned to understand the concerns of parents. She also has a son with albinism.

"Initially it was a little shocking," Ms. Summers admits. "We didn't know anyone in our family who had albinism."

Her son is now 28 years old and, to illustrate that challenges can be overcome, she rhymes off his accomplishments: "He's lived abroad, he works as a chef, he got married and had a baby!" 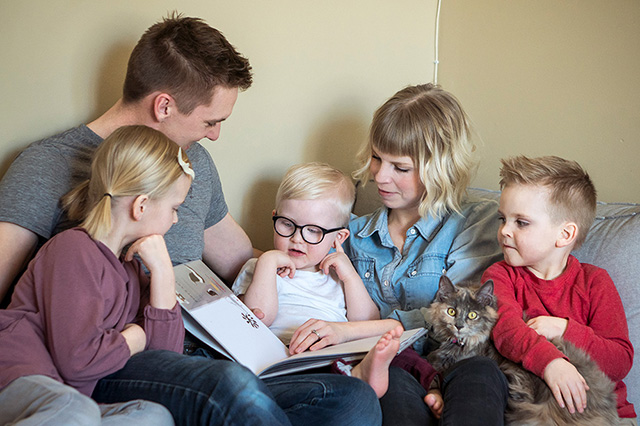 Ms. Summers says CNIB teaches strategies to parents to understand how vision can impact the learning style of their child. She's noticed that with Benji, much depends on his environment.

"If the lighting is just right, he can pick out things on a counter or in a book, but if he doesn't feel well, or is in a strange environment or the sun is streaming through the window, he's cautious and not sure what's being asked."

Increasingly, visual aids are playing a role. With an iPad, says Ms. Summers, you can take a picture on the board and enlarge the font to read it at your desk or download books and put in the right font and back lighting.

The iPhones have different apps, and, like an iPad, can snap a photo of something and it'll read it back to you or enlarge it."

Devices come in handy outside the classroom, too. "We bring the iPad to the zoo to zoom in on animals that are too far away," says Ms. Derksen, adding Benji has glasses for farsightedness and, compared to a person with 20/20 vision, needs to be eight times closer to see something.

He also uses a white cane occasionally to deal with poor balance and depth perception because a ramp, stairs, curbs and level ground can all look similar to him.

In other ways, Benji is a regular kid and is still required to participate in family chores and activities, often with modifications.

"We talk a lot in our family about how everyone is made different and that's good and okay," stresses Ms. Derksen. Her husband, Russell, "has been the one to always find the positive and to accept our family's differences and move on with a smile."

Siblings Faith and Jude understand that their brother needs a hat and sunglasses when going outdoors and always offer their own if they leave without Benji's.

While acknowledging the challenges, Ms. Derksen is pleased with her son's progress.

"His early work with the CNIB along with current work with his school {Ross Ford Elementary School} have helped him to be a strong, happy and fairly independent little guy. He has a great team in every area of his life cheering him on."

CNIB's goal, according to Ms. Summers, is to provide support to the child in their learning and to help parents realize it's still possible to do things. "We may just have to do it a different way. For example, if you're flying a kite, have one with bigger ribbons, so the child can see it up in the air, and don't fly it as high.

"My message is we can do anything, we just have to imagine it differently."