Victoria Nolan, a former teacher and bronze medalist for Canada's rowing team at the Rio 2016 Paralympics, has had to endure multiple denials of access related to her guide dog, a black Lab named Alan. In February 2017, Ms. Nolan, who is legally blind, made headlines after an incident involving a driver for UberAssist, who simply drove off after seeing she had a dog with her, even though UberAssist is intended for people with disabilities.

If creating awareness is a step towards ensuring public access for guide dogs and their handlers, then Ms. Nolan is ideally suited for her position as head of stakeholder relations and community engagement at CNIB, which she assumed in January 2018. As a teacher she helped to share knowledge, and as a blind person she has experienced repeated incidents of intolerance. Astonishingly, she has been asked to leave her guide dog outside while shopping. "That's like telling someone to just leave their wheelchair outside," she says.

In Ontario, the Blind Persons' Rights Act of 1990 prohibits anyone from denying handlers and their guide dogs the right of access to any public space. This includes places like restaurants, grocery stores, taxis and trains. But not all service-providers obey the law. "Most of the time it doesn't matter that you're quoting the law, they think they're right," Ms. Nolan says.

Ms. Nolan was initially reluctant to venture out in public with a guide dog, but knowledge of the law bolstered her self-esteem. "The more people feel like they know what their rights are," she says, "it might give them that bit more confidence to keep trying."

According John Mulka, Regional Vice President, Western Canada, CNIB, when it comes to the issue of access, "There's a lack of general awareness and understanding."

Despite the law, he says "you'd be surprised at the number of incidents that still occur in this country, and it's 2018." Ms. Nolan's experience with the UberAssist driver (who was later fined $250) is not a rare occurrence. Indeed, Mr. Mulka says denial of access to a person with a guide dog, whether due to prejudice, ignorance or indifference, is one of the greatest hurdles facing blind and partially sighted individuals in Canada.

It is the sheer number of Canadians with sight loss that provided the inspiration for the creation of CNIB's Guide Dogs program, which was launched in April 2017. Mr. Mulka says it came down to "what we were hearing from our clients and Canadians from coast to coast. They felt CNIB had a role to play – a more prominent role."

According to CNIB, an estimated half a million Canadians are currently living with significant vision loss that impacts their quality of life, and more than 50,000 lose their sight each year.

CNIB's Guide Dogs program was designed with a deep conscience, based on a set of inalterable principles for both handler and dog. Chief among these is that clients are exempt from any costs related to the care of the dog.  Such costs are not insignificant, but Mr. Mulka says the organization is "steadfast" in its commitment.

"We've said we will take care of the dog from the moment it's born till when it passes," he says. The Guide Dogs program is not a government-subsidized entity, and is completely reliant upon donations from corporations and other fundraising activities. "We have been fortunate to secure individual donors at a sum of $50,000 to support a dog from its early years as a puppy into formal training, then during its career as a guide dog, which on average is seven to eight years, and then into retirement."

All the dogs in CNIB's program (Golden and Labrador Retrievers exclusively, chosen because of their intelligence, sensitivity and gentleness) were sourced from an organization called Career Dog in Australia. There are currently 22 puppies in the program, located in three locations: Halifax, Greater Toronto Area and Winnipeg.

There are plans to add 32 more puppies into the program by the end of this year.  Puppies spend their first year with a volunteer CNIB Puppy Raiser, learning the basics of socialization, after which they will spend four to six months with certified Guide Dog Mobility Instructors (the international standard and certification requirement to train a guide dog appropriately), supported by Guide Dog Trainers who assist in the formal training of each dog. Of the 22 puppies currently in the program, 10 will be moving into training in the summer/fall of 2018. The first official CNIB Guide Dogs will graduate later this fall.

Over the course of their training, puppies will learn through repetition and the use of humane, positive-reinforcement methods to do things like walk with their handler in the centre of the sidewalk and how to avoid barriers and impediments while ensuring that the handler has adequate space to pass. The dog must recognize when a curb has been reached, maintain constant awareness of surroundings and assess traffic. A guide dog must even know when a situation warrants complete disregard of its handler's instruction to move if, say, a potentially hazardous vehicle suddenly appears.

CNIB's compassionate, principled approach extends to the unsuccessful candidates. Dogs deemed not suitable are never cast aside. Some will go on to work at CNIB offices, go out to community events to raise awareness or put in the Buddy Program, designed to give prospective handlers the experience of having a dog in their life.

Ms. Nolan says she knew early on in her training with Alan at California-based organization Guide Dogs for the Blind that they were destined to be together. "After just three days I couldn't imagine switching Alan for another dog," she says. "He's an amazing guide and very sweet."

While on the job, guide dogs are calm and vigilant. But what happens when Alan punches out at the end of a day? "He knows the difference between when his harness is on and when it's off," says Ms. Nolan with a laugh. "As soon as it comes off he goes into pet dog mode. The tail starts wagging, it's a new dog." 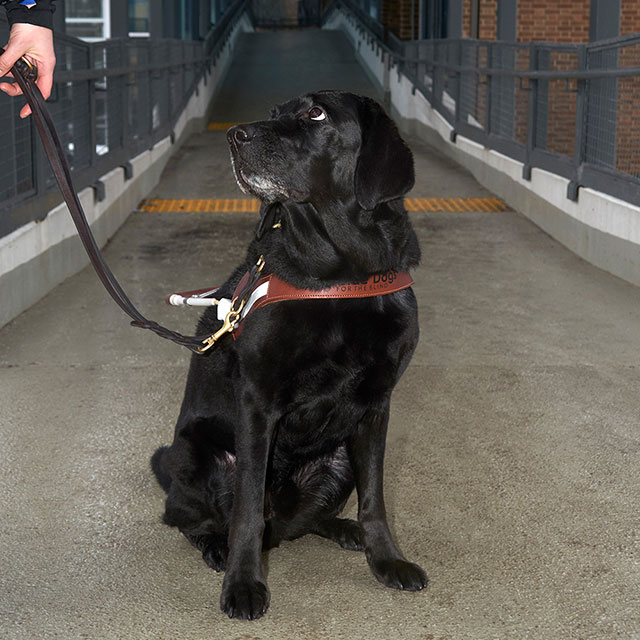 Follow these tips on how to behave around guide dogs and their handlers.

Just as workers punch the factory time clock, the same is true once a guide dog dons its harness: It’s all business until the moment the harness comes off. If you see a dog wearing its special harness, resist the urge to approach and touch.

Apart from the fact that guide dogs are well-cared for and do not require treats, offering food of any kind has the potential to distract them and put their handler’s life in danger.

Ask the handler for permission to pet the dog

Never approach and touch a guide dog unannounced or uninvited. Always ask the handler for permission before making any contact with a guide dog.

To you it might be a cute animal on the street, but to the handler the guide dog is a source of safety and security. Don’t rile up a guide dog or instigate play.

While highly trained, guide dogs aren’t robots either; they’re susceptible to distractions caused by unwanted interactions with other dogs – including yours. If out for a walk with your pooch, give the dog-and-handler team a wide berth, no matter how friendly your dog may be.