When dedicated CNIB volunteer June Feswick meets with her group every two weeks to work with yarn, she's doing more than teaching others how to create clothing. She's knitting together families and friends in a way that makes everyone comfortable.

The Knitting Club, which Ms. Feswick and CNIB Halifax employee Shelley Adams founded in June, 2015, meets at the Halifax CNIB Centre, offering people with vision loss and their families a fun, social and supportive group where they can learn or relearn a skill while helping each other. Vision loss can be devastating for those who experience it, as well as their families who must often suddenly help a family member in challenging new ways. The CNIB Knitting Club is the only one of its kind in Canada.

"When my husband, George, suffered a stroke and lost much of his vision, we had to learn together how to deal with this new situation," says Ms. Feswick, 74. "I still tell people at the club that one time George came out of the bathroom and said to me, 'I just brushed my teeth with your face cream – and you know, it didn't taste very good.' "

She learned from the CNIB to put a rubber band around the toothpaste, something a sighted person wouldn't otherwise consider.

Making sure counters are cleaned in a way that people with vision loss can find and reach items, ensuring boots aren't left in the hallway so that they don't trip up someone who can't see them – these and many other situations that sighted people take for granted need to be rethought and sometimes reorganized when there is vision loss in a family. Ms. Feswick's young grandson was the one who would remind others to keep the hallway clear of boots for Grandpa.

When George passed away in August, 2013, Ms. Feswick continued the work with CNIB that the couple had started. She had begun by making tea and coffee for people in the Adjustment to Vision Loss group counselling program that she and her husband attended, then became more and more involved. 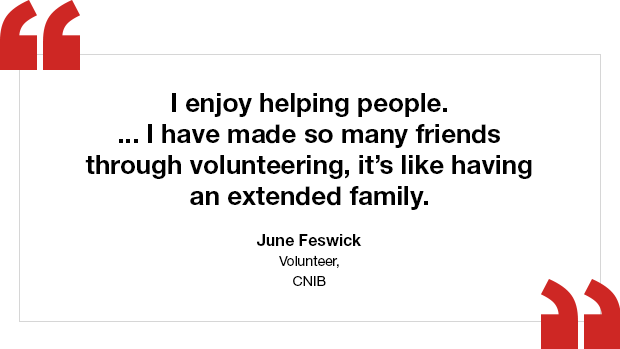 Aside from the Knitting Club, she has worked with CNIB staff to establish a peer support program for family members. And she helped CNIB to introduce a pilot project at the Eye Care Centre in Halifax that linked patients with CNIB vision rehabilitation programs and services.

"Vision loss really affects everyone," Ms. Feswick says. "I believe every politician should spend a week blindfolded, because until you do it, you don't really understand how difficult it can be."

As someone who's passionate about volunteering and making a difference, Ms. Feswick surprised even herself when she marched outside the Nova Scotia legislature in November 2015 to raise awareness about the need for funding for vision rehabilitation.

She advocated later for yellow lines that can be easily seen to be painted onto the library steps in Lower Sackville, which is near the community where she lives, Beaver Bank, just outside of Halifax. In both cases, she got her wishes and funding was made available.

So why does she volunteer?

"I enjoy helping people," she says. "I don't do it for the accolades. Just to see someone's face when you've done something a bit out of the ordinary is wonderful. People helped me and I have wanted to help others. I have made so many friends through volunteering, it's like having an extended family."