Matthew Rendall started his robotics company six years ago with a $50 investment and a huge dream.

Then came the “blood, sweat, tears and blind ambition” needed to get the enterprise off the ground, remembers Rendall, co-founder and CEO of Kitchener, Ont.-based Clearpath Robotics.

Now, Clearpath has a dream of helping southern Ontario become the Silicon Valley of robotics. “These jobs will be created and Clearpath wants to become an anchor in this industry,” says Rendall. “We want to magnetize robotics talent and robotics companies to southwest Ontario.”

That’s a tall order but it may just be doable, considering that moving product in manufacturing is a $100-billion market in the U.S. alone. 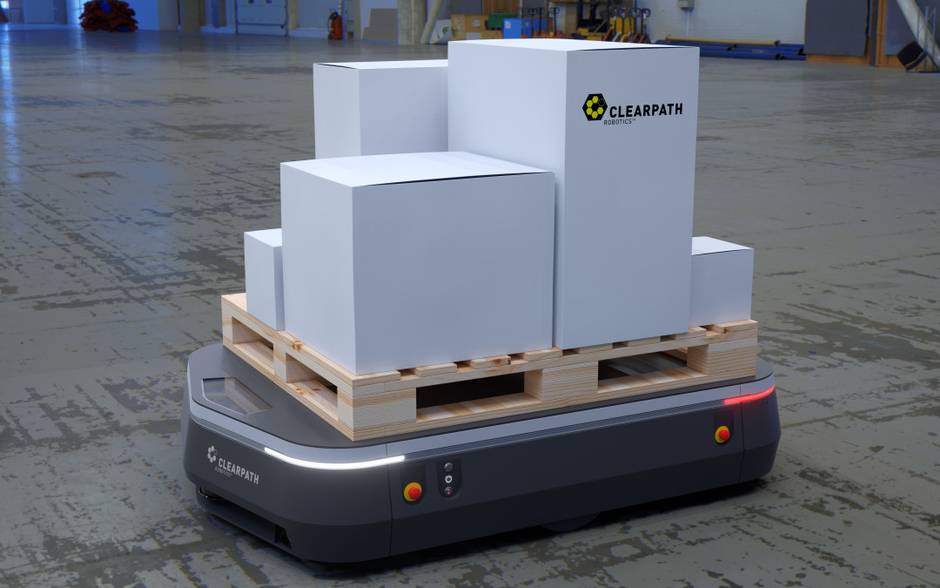 CLEARPATH ROBOTICS
Clearpath's OTTO robot is equipped with mapping software that allows it to avoid obstacles on its own.

Its core innovation is a robot named OTTO, who resembles R2-D2 flattened to pallet size. Rather than Star Wars movie magic, however, this droid runs on similar underlying technology to the Google self-driving car. This automated driving technology uses powerful software and 3-D maps to read information from sensors designed to detect objects such as pedestrians, cyclists, other vehicles and even fluttering shopping bags.

OTTO has a payload capacity of 1,500 kg. and is able to effortlessly move both large items and standard pallets with a zero turn radius and maximum speed of 2 metres per second.

“We have solved the most challenging technology milestones and now it’s largely about execution,” says Rendall, noting that being well funded through this period of rapid growth will be critical, particularly as robotics is a highly capital-intensive business.

OTTO is the first self-driving warehouse robot to be commercialized. Developing the customized hardware and software that makes him run did not involve a ‘eureka’ moment or a particular breakthrough. Rather, it required the blind ambition that Rendall speaks of and countless late nights of problem-solving and troubleshooting to get the technology working right. The end result was an intelligent robot able to carry a heavy load, track optimal paths in a congested industrial environment and safely avoid collisions.

So far Clearpath has signed a total of 100 customers in 40 countries, and its clients are largely in the automotive, food-and-beverage and contract-electronics industries. The plan is to become a $1-billion company in the next five to 10 years. Rendall says, “I see the majority of our growth coming from the U.S.” 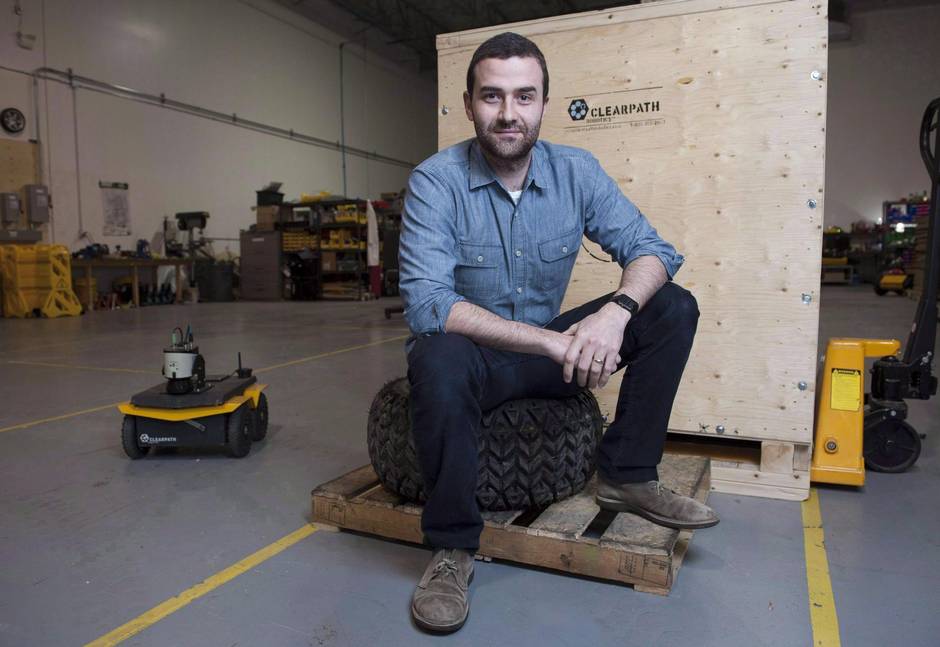 Things started to take off when Rendall managed to sign the Massachusetts Institute of Technology as a customer. “After that we could call any innovation lab and say ‘MIT is building robots on our technology,’ ”he says.

Clearpath was supported in its early stages by the Accelerator Program, an incubator in Waterloo which provided office space and a network of mentors. It was also nudged along by the University of Waterloo and the University of Toronto.

GE Ventures has also collaborated with Clearpath on robot development and earlier this year became an equity investor. The amount of the investment was not disclosed, but GE considers $3- to $5-million the sweet spot for its equity plays.

“Southern Ontario has huge potential for robotics,” says Bradley Smith, vice-president of regional programs for GE Canada in Ottawa. “The quality of its academic institutions and incubator community are second to none.”

For Clearpath, partnering with GE not only improves its balance sheet but also opens the vault to a depth of manufacturing know-how. “As a start-up in a new market with a new product, credibility is key,” says Rendall. “The fact that GE Ventures has partnered with Clearpath to develop our self-driving vehicles gives us instant credibility.”

Toronto-based Synaptive Medical is another Southern Ontario company using leading-edge robotics technology, in this case applied to a suite of neurosurgical tools. The company uses an automated arm with state-of-the-art optics that follow a surgeon’s hands as he operates. 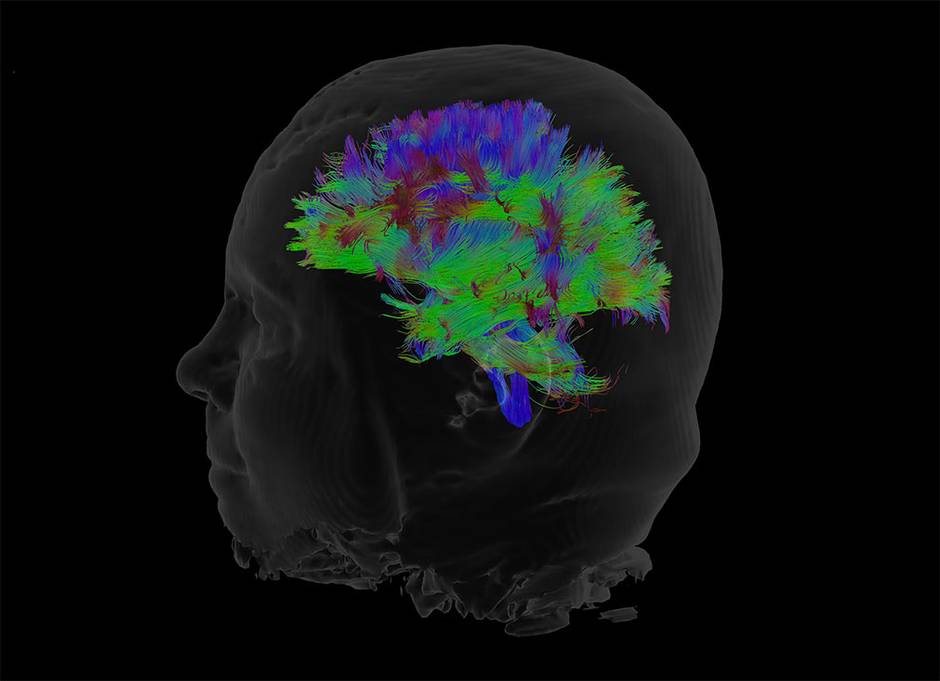 The robotic arm projects the best possible view of a patient’s brain onto a large monitor so everyone attending sees the same image. This is in contrast to the traditional microscope which has a surgeon looking through oculars into the surgical cavity, often straining his or her posture.

“We have been able to develop such an exciting system due to the exceptional engineering and physics talent we have in Ontario,” says Cameron Piron, president and founder of Toronto-based Synaptive Medical. “The solution has evolved from the creative problem solving ability of our employees, partner companies and collaborations with clinicians.”

Synaptive’s business plan calls for reaching out to surgeons and hospitals globally. It does not have specific revenue targets, but in the next five-plus years expects its imaging technology will help treat hundreds of thousands of patients per year.

In doing so, Synaptive plans to bring a significant number of jobs back to Canada and southern Ontario, which it hopes will strengthen innovation and entrepreneurship among new university grads. But Piron is a little pessimistic about the general lack of financing options for Canadian tech start-ups. “Canadian banks are a barrier to quick growth,” says Piron, whose company is privately funded.

Fortunately, foreign venture-capital companies, such as GE Ventures, are finally looking beyond Silicon Valley to Canada for investment opportunities. In fact GE Ventures plans to accelerate the growth of 50 southern Ontario startups it met with on a recent whistle stop in Toronto.

“We’re excited that GE Ventures is considering significant contributions to Toronto health care and the high-tech ecosystem,” says Piron. “It is a good indication of how quickly this community is being considered internationally influential.”