RBC
THE GEN Z ECONOMY
What's the future of jobs for Gen Z? Five charts that may hint at the answer

Move over, Millennials, there’s a new generation coming through. Generation Z – loosely defined as those born between the mid-late 1990s and early 2010s – is poised to take its first steps into Canada’s labour market, with the oldest crop preparing to graduate from university and college.

But this cohort will find a vastly different landscape compared to previous generations, including different expectations for skills, education and technology. If the statistics are to be believed, here are a few key things that Gen Z can expect in the future:

This story is part of a Globe Edge series on Generation Z and the future of jobs.

Read more from this series.

It’s no secret that Canada’s economy is changing. According to the Economic Policy Directorate of Employment and Social Development Canada (ESDC), roughly 1.5 million new jobs are expected to be created from economic growth in the next decade, representing an annual average growth rate of 0.8 per cent.

The six industries projected to have above-average growth are all related to “professional and scientific services,” with computer system design expected to see the highest growth rate at 2.1 per cent.

“As we look at our economy, we’re increasingly service-based, and so [Generation Z] can tap into that,” says Lara Dodo, regional manager of Ontario, Manitoba and Quebec at staffing agency Robert Half, adding that “the world is moving toward more of a specialized skill set.”

The jobs expected to see below-average growth, or even a drop in employment, are those connected to oil and gas extraction, along with other primary industries like forestry, agriculture and fishing, and manufacturing.

In its report, the ESDC says that among the causes for the changes are technological improvements and spending constraints in primary industries, along with the “ongoing transition towards a knowledge-based economy.” 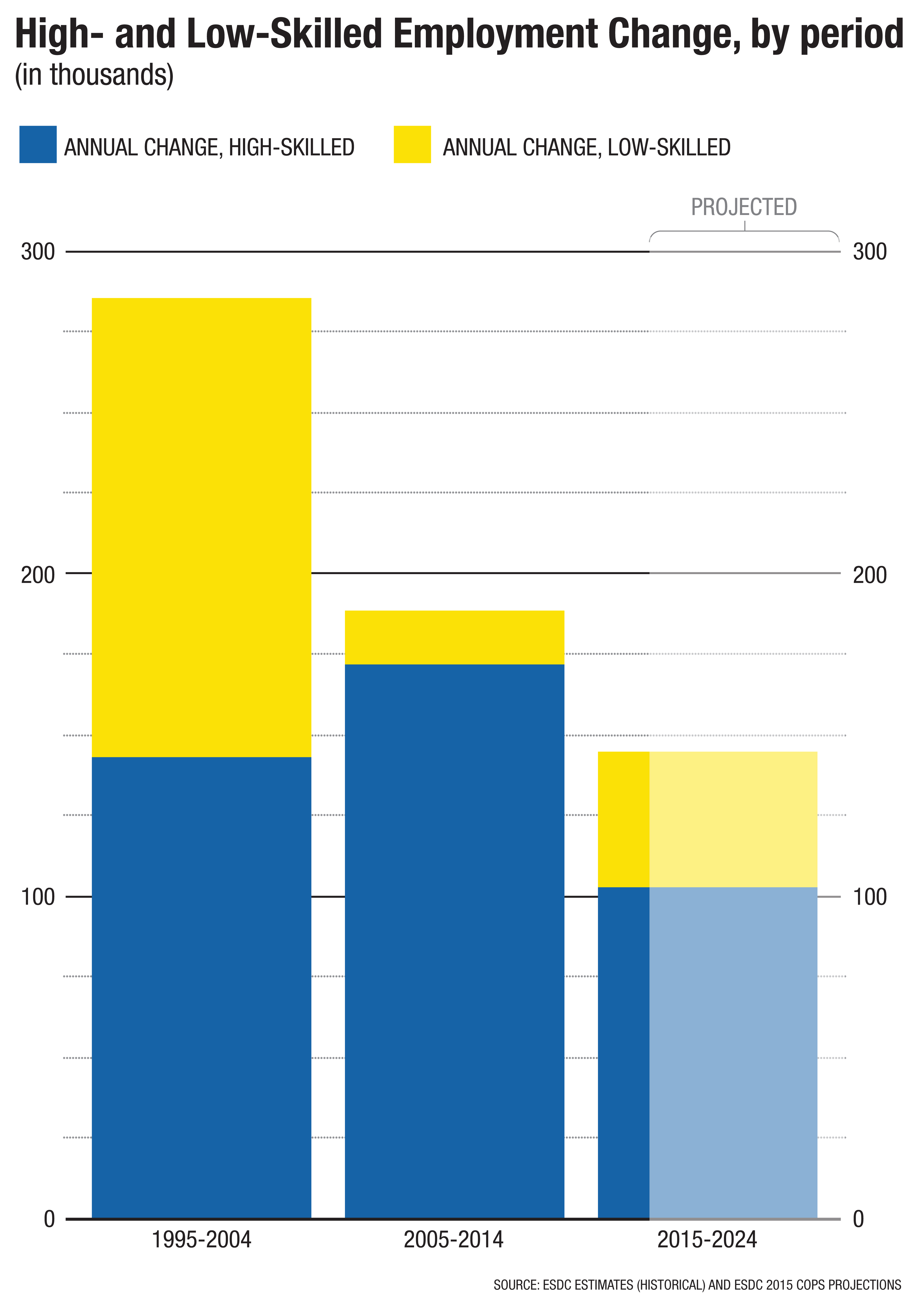 Indeed, the lion’s share of Canada’s employment growth in the next ten years – 70 per cent – is expected to be in what ESDC calls “high-skill occupations.”

And as the source of job growth changes so, too, will the composition of tomorrow’s workforce. 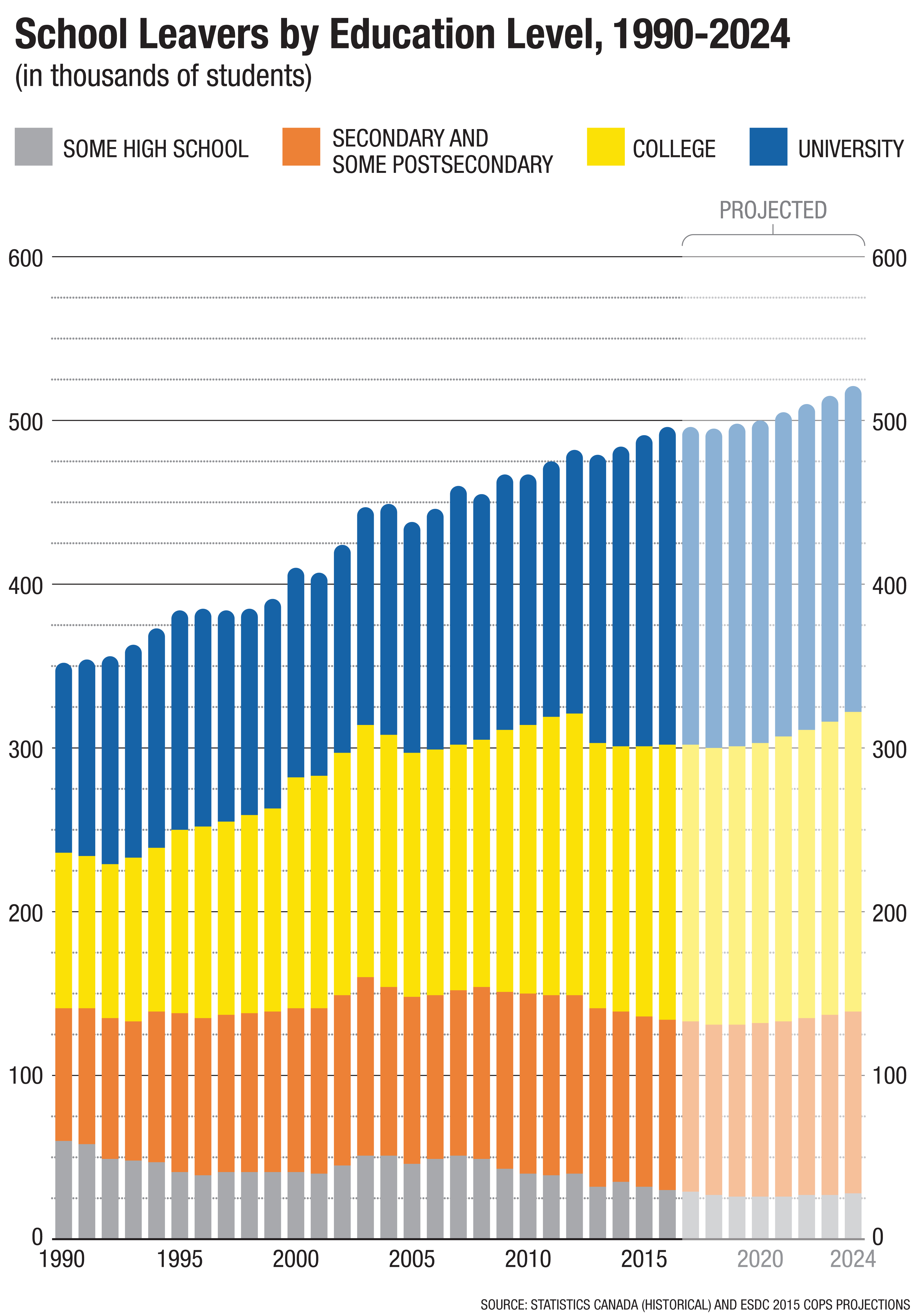 The job market will favour the highly-educated

Job seekers in the coming decade – many of them from Gen Z– are set to rise to the opportunity of the changing job landscape. “This is going to be the most educated group we see,” says Dodo.

In the next decade, the ESDC estimates, the number of people who will leave school with a high school, college or university education is expected to increase at an average growth rate of 0.7 per cent, 1.2 per cent, and 0.8 per cent respectively. Meanwhile, the number of people who leave with less than a high school education is projected to continue decreasing at an average rate of 1.9 per cent per year. 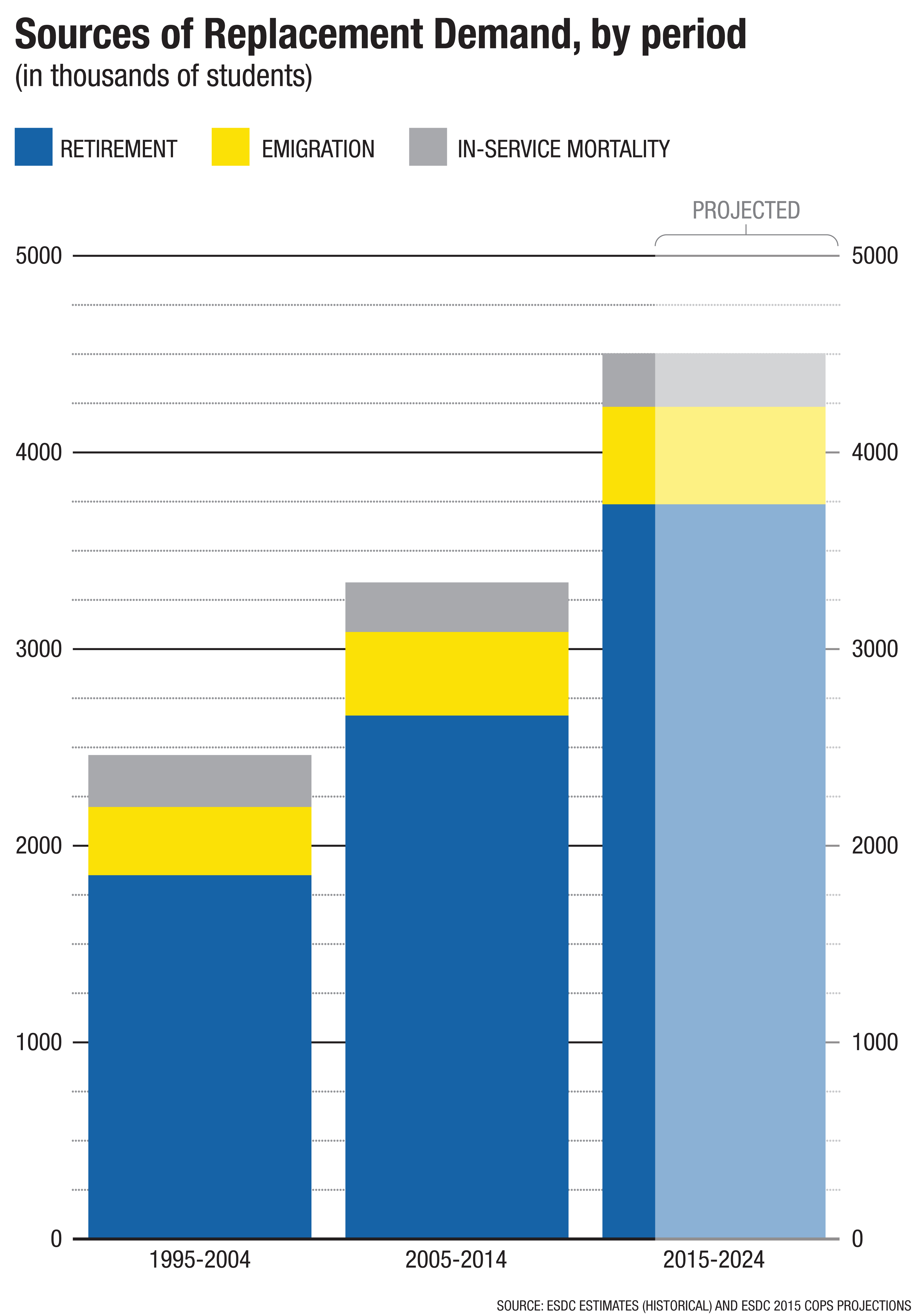 Keep in mind the timing of Gen Z’s maturation, Dodo advises. “This group, as it comes into the workforce, will be replacing the aging Baby Boomers.”

Previously, Millennials were expected to be the biggest beneficiaries of a mass wave of baby boomer retirements. But Baby Boomers, Canada’s largest population segment, hung onto their jobs much longer than expected. The ESDC expects that approximately 3.7 million positions opening up in the workforce as Boomers retire between 2015 and 2024. 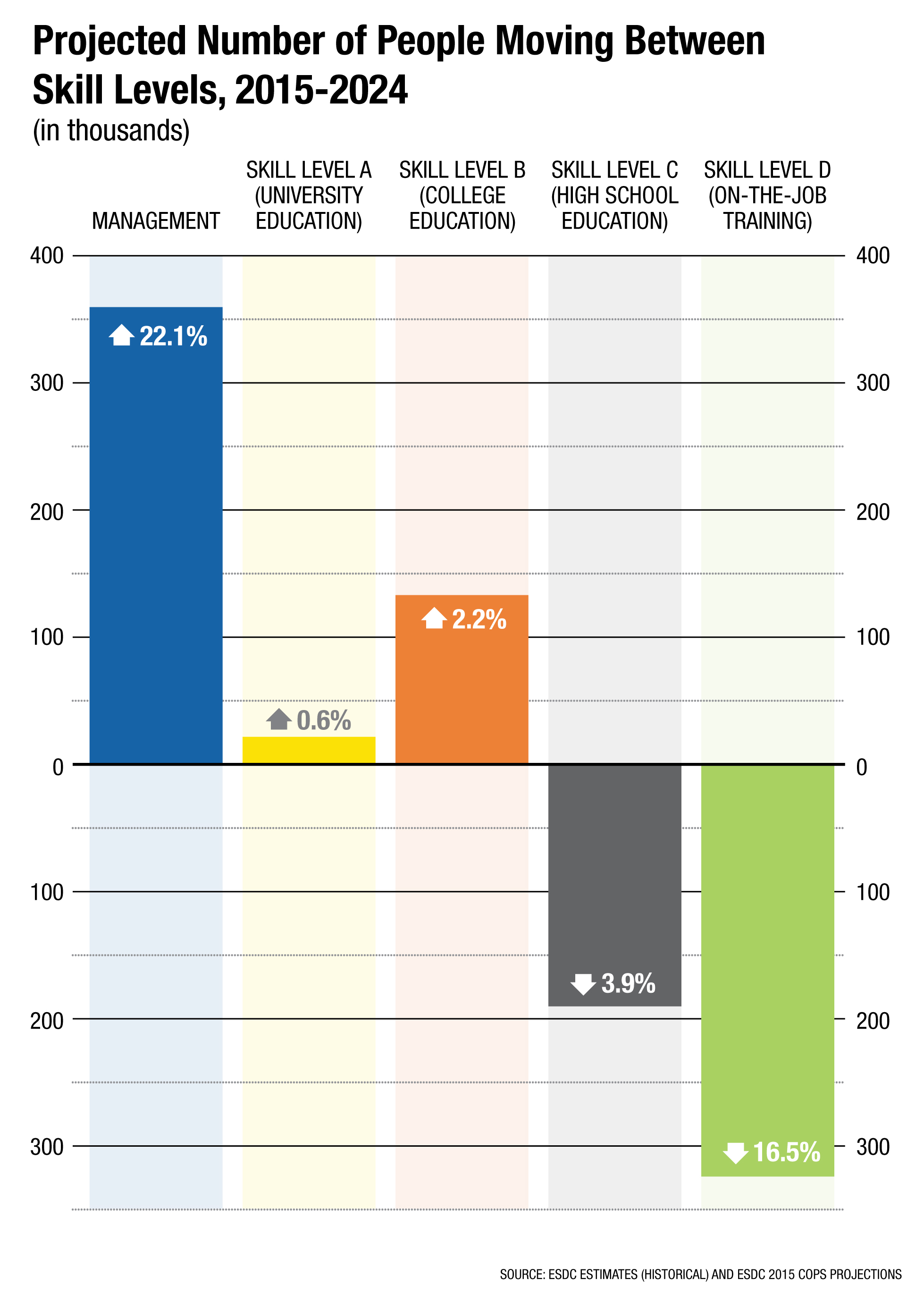 The ESDC expects more than half a million workers – 514,000 to be exact – to be vertically mobile in the next decade, moving out of lower-skilled positions that require only a high school education or on-the-job training into ones that require post-secondary education.

Management positions are expected to receive a high amount of vertically-mobile workers, and the report notes that “around 55 per cent of the supply for management occupations representing more than 359,000 new managers is expected to come from occupations in lower skill levels.”

This bodes well for Generation Z. According to a 2015 survey of U.S. and Canadian Gen Zers released by staffing agency Robert Half, 32 per cent expect to be managing or supervising employees in a corporate environment five years out from graduation. Twenty-four per cent see themselves on their way to working up the corporate ladder.

“Most of them feel they’ll end up in a leadership role,” Dodo says. “Well over 50 per cent [of those polled by the agency] expect to be upwardly mobile within five years of graduation.”