The latest Thomson Reuters/Ipsos Canada Primary Consumer Sentiment Index (PCSI) shows consumer confidence dropped 1.1 per cent in June to 51.6, its lowest point since January when the level was 51.7. The June results are well below the 56.4 level last August, before plunging oil prices took a bite out of Canada’s economic prospects.

Jharonne Martis, director of consumer research at Thomson Reuters, said consumers appear to have been rattled by more bad economic news in recent weeks. That includes a handful of high-profile retail store closures, volatile employment data, and lower economic forecasts as a result of the country’s reliance on the oil industry.

Although Canadians were feeling more optimistic about May, sentiment fell again for June. 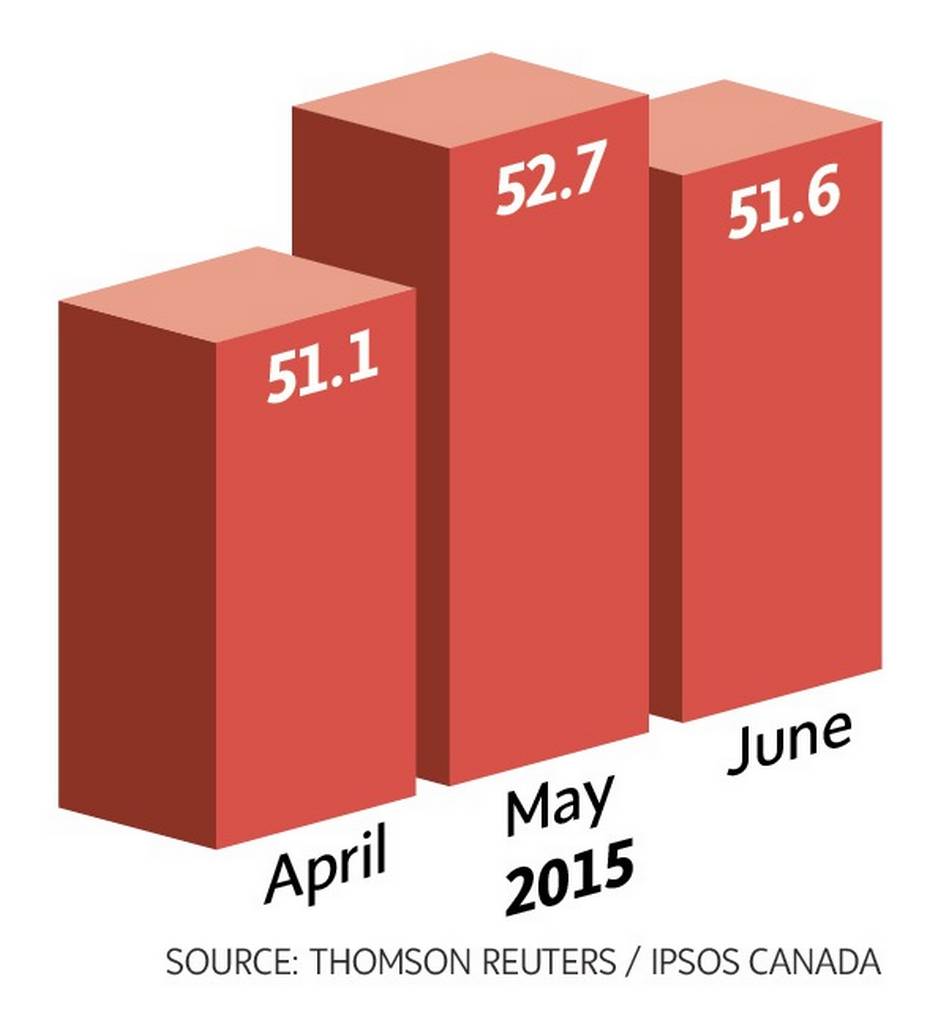 The Organization of Economic Co-operation and Development (OECD) recently cut its economic forecast for Canada to 1.5 per cent this year, down from a March prediction of 2.2 per cent and 2.5-per-cent estimate in November. Lower oil prices are an obvious factor, but the OECD also cited record-high household debt levels and rising house prices as posing financial-stability risks for the Canadian economy.

Earlier this year, Bank of Canada governor Stephen Poloz described Canada’s first-quarter growth as “atrocious,” due to the impact of oil prices, which have fallen by about half since the summer of 2014. Canada’s economy shrank at an annualized pace of 0.6 per cent in the January-March period, Statistics Canada said recently. It was the first quarterly decline since 2011.

“All of that negative news has kind of put a downer on consumer sentiment,” Martis said.

However, she notes the news isn’t all negative for Canada’s economy, and needs to be put in context.

The OECD also forecasts the Canadian economy to grow 2.3 per cent in 2016. Economists at the Royal Bank of Canada are more upbeat for both this year and next, predicting 1.8-per-cent growth in 2015 and 2.6 per cent in 2016.

Many of the recent retail store closures, such as Target, Future Shop and photography retailer Black’s, are driven more by changing consumer tastes than negative economic trends in the sector, Martis said.

The weaker Canadian dollar, on the back of lower oil prices, also has some Canadians worried about the economy. Martis said the lower loonie is a benefit for many sectors such as manufacturing and the movie production business.

“The reality is that, even though the dollar is weak, it has made it more attractive for foreign investors to come to Canada,” Martis said. 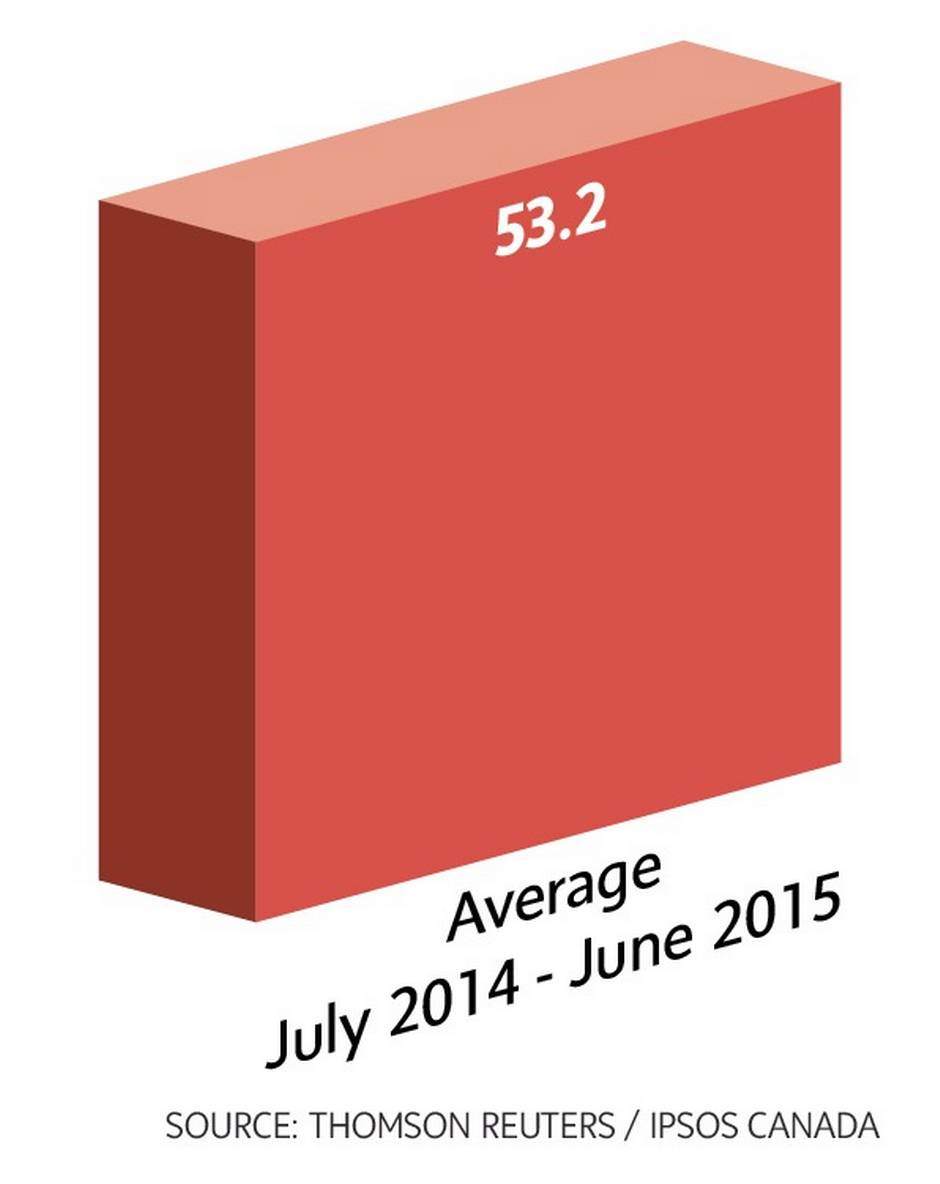 The Thomson Reuters/Ipsos PCSI is a monthly national survey of consumer attitudes on the current and future state of local economies, personal finance situations, savings and confidence to make large investments. Since it has been tracking sentiment in 2010, Canadian consumer confidence has been relatively consistent, in the mid-50 range. In the U.S., confidence has been more volatile, hovering in the 40-range until last year. It has been in the mid-50s ever since, as the American economy builds strength, now outpacing growth in Canada.

John Wright, senior vice president and managing director at Ipsos Public Affairs, said the Canadian numbers have been more consistent over the years in part because the country wasn’t as hard hit by the 2008-09 global recession as compared to countries such as the U.S. and parts of Europe.

He said Canadians are cautious about the economic uncertainty today, but don’t appear panicked.

“We’ve heard some bad news about the economy, but it hasn’t rocked us,” said Wright, describing Canadians’ attitudes as “neutral to positive” on the economy.

Doug Stephens, a retail consultant and founder of Retail Prophet, said some Canadian consumers are more tentative these days because of the warnings around the heated housing market, record debt-to-income level and what could happen to the economy once interest rates begin to rise.

While predictions of a housing market crash have so far been unfounded, many are worried about a correction that could reduce the value of their assets.

“For many Canadians, the majority of their wealth is tied to their homes … that in itself is putting people on guard,” Stephens said.

He describes the overall retail landscape as “pretty anemic.” Some of the most robust retail sales are coming from big-ticket items with low or zero-interest financing, such as cars and appliances.

Household spending grew just 0.1 per cent in the first quarter, the slowest growth since the second quarter of 2012, according to Statistics Canada.

Debt loads are a worry. Canada’s household debt-to-disposable income ratio was 163.3 per cent in the first quarter of 2015, which is near a record high, according to Statistics Canada. This means that Canadians are borrowing $1.63 for every dollar they make. While some believe the ratio isn’t a concern since interest rates are low and asset values are also growing, Canadian policymakers and politicians have cited growing household debt as a concern.

Capital Economics economist David Madani doesn’t expect a bounce back in household spending for the rest of 2015.

“Looking further ahead, consumption growth is likely to slow,” he said in a recent report, saying the “fallout in the energy sector is far from over” and unlikely to be offset by a pickup in other parts of the economy.

“Under these circumstances, we anticipate gains in employment and real wages to be modest. And with household debt at record highs, we expect consumption growth less than 2 per cent over the rest of the year.”