Canadians are more optimistic about their country's economic situation than their neighbours in the U.S., but American confidence is growing more quickly thanks to stronger economic growth south of the border.

According to the latest Thomson Reuters Consumer Outlook Index, 66 per cent of Canadians rate their economy as "very good" or "somewhat good," while in the U.S., 44 per cent rate rated the same.

That compares to the global average of 39 per cent among 25 countries in the index.  Saudi Arabia was the most confident at 84 per cent and Italy and France the least, each at 7 per cent.

The index however, also shows that the local economic outlook for the next six months is growing faster in the U.S. than Canada.

"Americans feel like things are going to improve in the next six months whereas Canadians, not so much," says Jharonne Martis, director of consumer research at Thomson Reuters.

The dramatic drop in oil prices, which is weighing on economic growth in Canada, is said to be having an impact on consumer confidence, especially in oil-dependent provinces such as Alberta.

"The way Canadians feel about their national economy is flat, whereas their confidence in the local economy has deteriorated," Martis says.

The American statistics are a dramatic improvement from the 19 per cent in 2012. That compares to Canada, which has remained in the low-to-mid 60-per-cent range over the past three years. Canadians were more pessimistic around the 2008-09 recession, when 44 per cent rated their economy as being in good shape. That was nearly a drop in half from  87 per cent who were confident in late 2007, when a booming economy and soaring commodities prices had many feeling flush.

But looking six months into the future, only 19 per cent of Canadians see a stronger economy in their local area, compared to 26 per cent of Americans and the global average of 24 per cent. Consumers have also proved to be fairly accurate in predicting the future, with unemployment rates in the following month typically spiking or falling according to how Canadians felt about the economy.

Julie Adès, a senior economist at the Conference Board of Canada, says confidence has fallen in oil-rich provinces such as Alberta, but increased in Central and Eastern Canada. Not only are consumers feeling good about saving money at the gas pumps, but economic activity is expected to pick up in manufacturing-dependent provinces such as Ontario and Quebec. Businesses in these provinces gain from cheaper energy prices, but also the lower Canadian dollar, which makes their exports cheaper and more attractive to outsiders.

According to Conference Board of Canada data, consumer confidence across Canada increased at the beginning of the year even as oil dropped in half to below $50 (U.S.) per barrel. Overall, confidence grew by 4 percent in 2014, though the figure is still a far cry from the 19 per cent rise in the U.S.

Alberta, in particular, is suffering as companies cut costs and jobs to cope with lower oil prices, which makes consumers nervous about spending. The Conference Board is predicting Alberta will be in a recession this year.

"There will be winners and losers in terms of industries," due to lower oil prices, says Adès.

Adès and other economists will be watching closely to see what impact the Bank of Canada's recent cut to its benchmark interest rate will have on overall Canadian consumer confidence in the months to come, especially if the bank decides to cut further, as some now predict.

A faster-growing economy, including higher wages and job growth, are often aligned with consumer confidence, but it's not a straight economic equation, says TD Bank economic analyst Admir Kolaj.

Still, he says economic growth this year is expected to be much stronger in the U.S. than in Canada.

"The buoyant job market is the main source of economic optimism for the U.S. and we expect this momentum to continue in 2015, despite a gloomy global backdrop," he says.

TD economists expect Canada's economy to slow to an average of 2 per cent growth this year, down from 2.4 per cent expansion in 2014, amid a drop in consumer spending.  That compares to an expected pickup in U.S. economic growth to 2.8 per cent in 2015 from 2.5 per cent last year.

"Both countries will save at the pump due to lower gas prices and this will help support spending," Kolaj says. 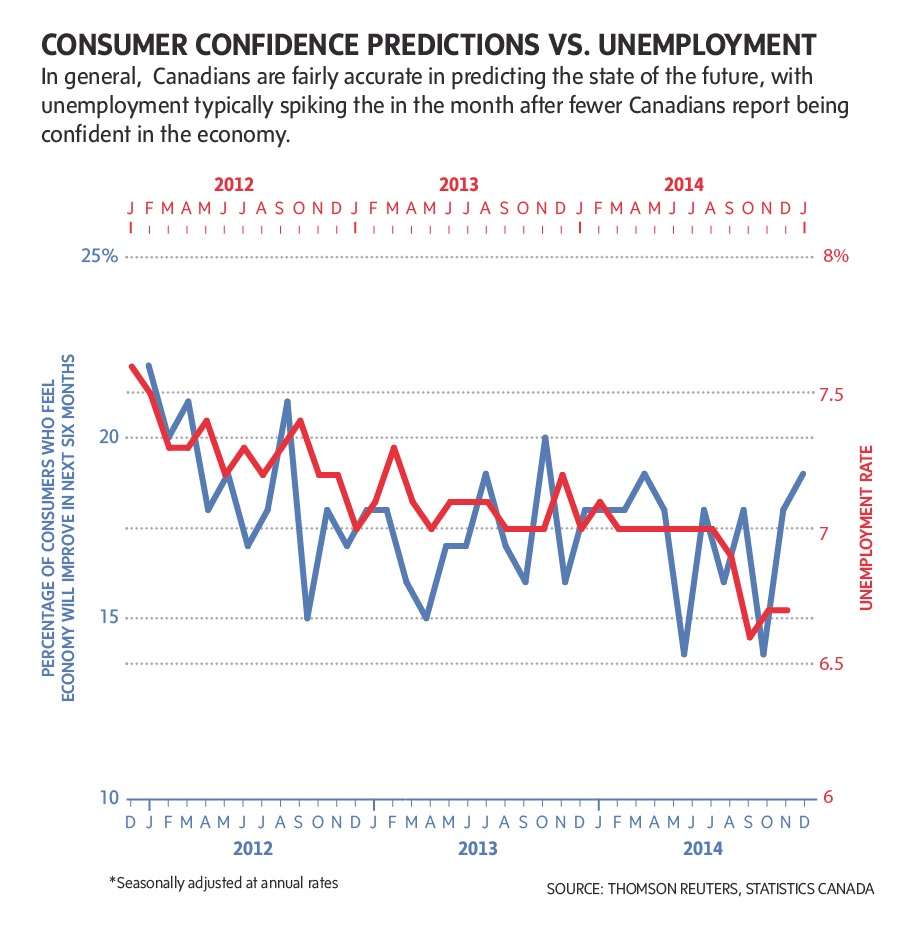 This content was produced by The Globe and Mail's advertising department, in consultation with Thomson Reuters. The Globe's editorial department was not involved in its creation.