The agriculture sector is more important to Canada than all other countries, but the country will need to overcome its heavy reliance on the U.S. in order to continue being a global agriculture trading leader, according to a top industry organization.

According to Farm Credit Canada's (FCC) latest global trade report , the value of Canada's agriculture imports and exports was more than $2,100 (U.S.) per person in 2013, more than any other country, including the U.S. and the European Union.

Australia, with export values and a small population similar to Canada, was second with values at about $1,900.

The U.S., however, remains Canada's largest trading partner in the sector, representing about half of its value. About 61 per cent of agricultural import values come from our neighbour south of the border.

"Trade matters a lot to our industry. We have to take care of it," said FCC chief agricultural economist J.P. Gervais, citing statistics showing Canada's agriculture and agri-food system accounted for 6.7 per cent of GDP in 2013 and one in eight jobs. 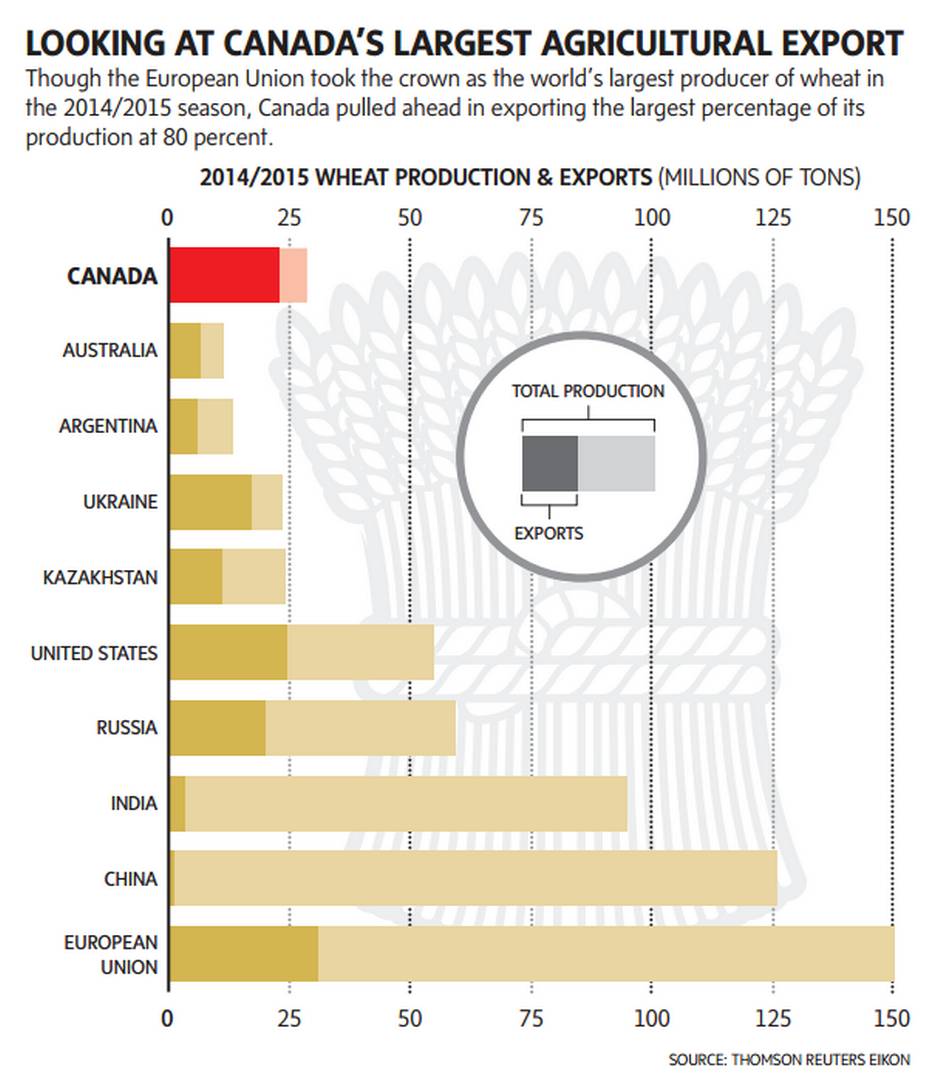 "I think we're moving in the right direction," he said, pointing to trade deals in the works with Europe and negotiations with countries across the Asia Pacific as key efforts to expanding Canada's reach beyond just the U.S.

"We understand that it's important for our business," he said. "It would be really nice to expand and diversify our markets."

Canada "holds its own" in the global trade arena when compared to countries with larger populations and economies, the FCC report says.

Canada is the fifth-largest exporter of agricultural products, with export sales of $43.6 billion, and accounts for about 3.5 per cent of the total world value, according Agriculture and Agri-Food Canada. Canada ranks behind the European Union, in first place, the U.S, Brazil and China.

Exports to China are also growing rapidly. In 2012, China surpassed Japan as Canada's second-largest agriculture and agri-food export destination, accounting for about 11 per cent of exports.

What's more, Canadian exports of both agriculture and agri-food products to BRIC (Brazil, India, Russia and China) countries have increased at a faster pace than exports to OECD countries, according to the FCC report.

"Yet sales in these destinations remain only small components of total agriculture and agri-food exports," the report states. "Developed economies are and will continue to be the most important markets for Canadian products."

Canada is the 6th largest importer

Often overlooked in the discussion around global agriculture trade is how much agriculture and agri-food product Canada imports.

"We are leaders in terms of trade, not just the exporting side," said Gervais. "We import a lot of food."

Canada is the sixth largest importer of agricultural produce - behind the EU, the U.S., China, Japan and Russia - and accounts for 2.7 per cent of the total value of world agriculture and agri-food imports.

Import sales reached $32.3 billion in 2012, according to statistics from Agriculture and Agri-Food Canada, which is an increase of 4.2 per cent over the previous year.

Gervais said imports are driven by changing appetites among Canadians looking for more sophisticated foods not produced in Canada, as well as the colder climate compared to other growing regions, which prevents year-long production of food such as fresh produce.

Changing weather patterns and the trend of warming global temperatures may also have some unintended side benefits, in particular for wheat and canola, Canada's two largest grain crops.

"A warmer world actually results in higher crop production, at least in Canada," said Corey Cherr, head of agriculture and weather research and forecasts, Thomson Reuters. "Canada is making and going to make quite a bit more than it has in the past."

Cherr said the issue for Canada is the capacity to export more agricultural products when elevators, ports and other infrastructure are already congested.

"[Canada] can produce it, but it can't get it out of the country," he said.

Infrastructure is critical for Canadian exports in future as Canada looks to extend trade with two of the world's most populous nations, India and China.

In India, the removal of trade barriers for Canadian lentils to India could result in a 147 per cent increase in exports over five years, according to the FCC report.

Meantime, a growing middle class and rising income in China could increase exports of red meat products such as beef and pork. Canada already exports about half the red meat produced in the country.