When George Ogilvie joined Kirkland Lake Gold Inc., 15 months ago, the company had posted no profits over the previous year and was losing money.

Like other gold producers, the Northern Ontario mine was feeling the impact of declining demand for the yellow metal – a trend that, combined with robust global supply, had pushed down gold prices from a high of US$1,900 an ounce in 2011 to around US$1,200 by the time Ogilvie stepped in as Kirkland Lake’s CEO in late 2013.

That was then. Today, the gold industry is facing much brighter prospects.

“It's a moving target but I believe over the longer term we are going to see greater demand for gold particularly from China and India, where in their culture gold is seen as something to be given as dowry, status symbol and wealth,” says Ogilvie.

According to research by Thomson Reuters, demand for gold in 2015 is set to improve, thanks in large part to a stronger jewelry market in Asia. 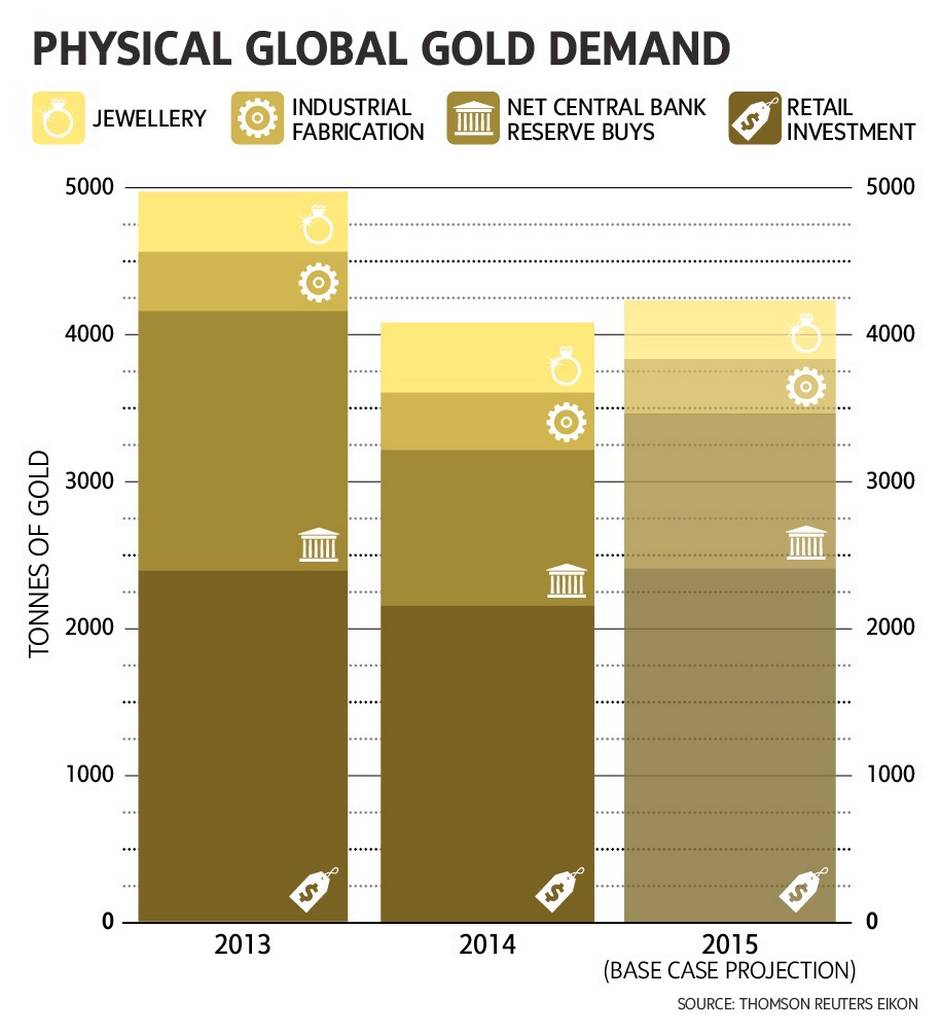 “Demand for gold dried up in 2014 but this year we anticipate that it will go up again,” says Sridharan Raman, an analyst at Thomson Reuters.

This resurgence in demand, however, may not necessarily translate to higher gold prices, he says. He cites stable inflation rates and the strong U.S. dollar as reasons for sustained low prices over the coming months.

“Gold is a safe haven against inflation and no one is expecting inflation to increase, especially given today’s oil prices,” says Raman. “Also, the price of gold is denominated in U.S. dollar, so the strong U.S. dollar is one reason why gold prices may be depressed. If the dollar weakens for any reason, look for gold prices to go up.”

But even if prices stay flat, the general outlook for miners is positive, especially for those in Canada, he says. As global production stays flat or decreases over the next two years and demand increases, Canadian output will likely continue to rise. Last year alone, mines in Canada produced almost 30 per cent more gold than in the previous year. By comparison, U.S. production fell by more than eight per cent.

To counter the bottom-line impact of sustained low prices, many Canadian mines are shifting their focus to less cost-intensive projects and shutting down higher-cost mines, says Raman. Recent investments in advanced technology are allowing the country’s producers to extract gold more efficiently and either continue mining at the same volumes or increase their output.

That is certainly the case at Kirkland Lake. After Ogilvie came in as CEO, the company shifted its focus from producing more gold to extracting higher-grade ore. This accomplished two things: it lowered the mine’s production costs – more tonnes extracted means more people and infrastructure needed to do the job – and widened profit margins.

Today, Kirkland Lake continues to focus on quality but has also started to boost its production volume. Recent technology and infrastructure investments have reduced the company’s costs, says Ogilvie. For example, the company has switched out some diesel-powered equipment for ones that run on batteries.

“Electricity is less costly than fuel,” says Ogilvie. “Plus, it produces a much better working environment because when you run diesel equipment underground it generates noxious gases and you need have a certain amount of ventilation to dilute those noxious gases.”

A similar focus on quality first, volume second is also evident at Primero Mining Corp., which recently expanded a high-grade corridor in its Black Fox mine in Timmins, Ont.

“Focusing on the quality of the asset certainly gives us more flexibility around our costs and margins,” says Tamara Brown, Primero’s vice president of investor relations. “In this industry we say that grade is king, and that certainly holds true here.”

Canadian producers have historically enjoyed a cost advantage over their American counterparts. According to Thomson Reuters data, the cost to mine gold in Canada, at US$706 an ounce, is about $30 less than what it costs in the U.S.

“Canada is more efficient in getting out the gold,” says Raman. “This could be due to various factors, such as technology, environment – some Canadian mines may have better ground –or an easier regulatory environment.”

At the same time, over the next two years cash flows are expected to improve for many Canadian miners as their projects advance to the production stage and they start paying down debt.

“A lot of big miners right now don’t look terribly attractive because they have a large amount of debt on their balance sheets,” he says. “But we are slowly becoming more optimistic are about companies as they start paying off some of that debt in 2015 and 2016.”

See how Thomson Reuters Eikon delivers the information needed to compete and win in the metal trading marketplace.