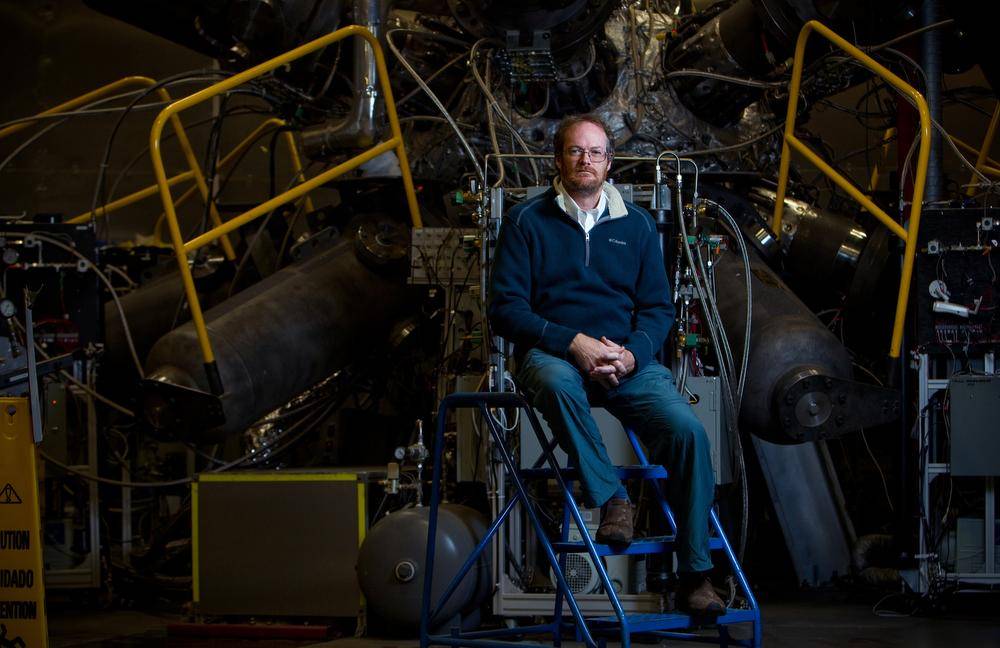 Michel Laberge, the founder and chief scientist of General Fusion, sits in front of a prototype fusion reactor built at General Fusion in Burnaby. (BEN NELMS)

General Fusion’s plan to rescue Earth from the calamity of global warming involves an ironic feat of physics: How to make a miniature sun and contain it.

Yet not even the challenge of bottling the kind of superheated energy powering the centre of our solar system fazes the founder of the Burnaby, B.C., cleantech firm. Asked about the doomsday-dodging promise of his experimental nuclear fusion reactor, company founder and chief scientist Michel Laberge was unequivocal. 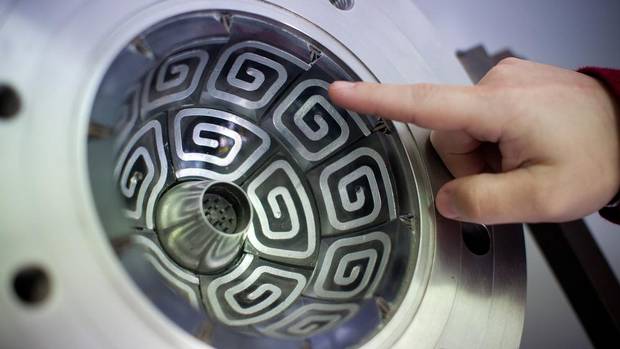 While nuclear fission involves splitting atoms, potentially releasing the kind of energy used in nuclear bombs, fusion is all about merging two nucleons.

Fusion power is considered to be intrinsically safe. The reaction itself produces helium as a byproduct, so there is no long-lived nuclear waste. It also means there's no chance of a power plant meltdown or runaway reaction because if the fuel never gets hot enough to produce fusion, the whole process halts.

An endless, clean fuel supply is another draw. The hydrogen isotope deuterium, which is used in the fusion process, can be extracted from the ocean. There's enough deuterium on Earth to last mankind for more than a billion years.

The machine is no sci-fi prop, though. Laberge believes the scaled-down version of General Fusion’s would-be reactor, protruding with 14 cylindrical pistons that bring to mind a huge, bionic sea urchin, has a serious shot at a goal that has long eluded scientists.

As Laberge likes to say, “Fusion is coming, and it’s coming much sooner than we think.”

Laberge, tall and French-Canadian, has moved his company, which operates out of a former coffee-roasting warehouse outside Vancouver, to the forefront of the international competition to achieve that miracle energy solution.

Fusion would replace fossil fuels with a cheap, renewable, clean source derived by smashing atoms together so quickly they generate heat in the same reaction that makes the sun burn.

Unlike nuclear fission, in which splitting atoms can unleash enough energy to flatten a city, nuclear fusion has long stumped scientists. Melding two protons seems impossible because their positive charges mean they should repel one another.

False promises and delays have fostered skepticism. A running joke in the fusion community is that the answer has been “30 years away” for decades.

World bodies have poured fortunes into exploring two main potential solutions. One has to do with the lasers; the other with superconducting magnets.

The approximately $3.5-billion U.S. National Ignition Facility (NIF) is hanging its fusion hopes on 196 high-powered lasers in a facility the size of three football stadiums. By blasting a pellet of hydrogen fuel, scientists hope to crush it and trigger fusion.

Another approach studied around the world involves cooking up hydrogen gas within a donut-shaped chamber. Magnetic coils would corral the particles, preventing plasma from melting the walls. The largest of these projects is the $16-billion International Thermonuclear Experimental Reactor (ITER) being built by a multinational consortium in the south of France. 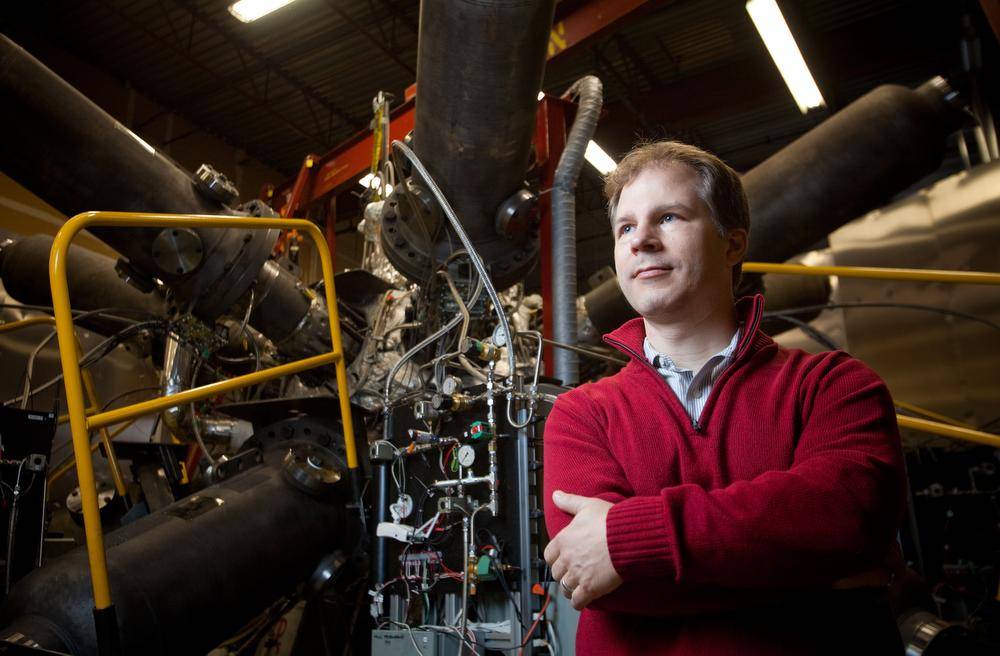 “ITER and NIF are kind of pursuing two ends of possible fusion solutions,” said Dave Hassan, a former consultant with Cenovus Energy who, in 2011, helped convince the Alberta oil-sands giant to invest $6.3 million into General Fusion.

“The ultimate test will be with getting a working fusion reactor,” Hassan said. “What’s intriguing about General Fusion is it’s kind of in the middle between NIF and ITER, but it doesn’t require the same kind of exotic materials.”

The Canadian company’s proposal brings a much lower price tag to boot.

To the company’s angel investors, which include Cenovus as well Amazon.com founder Jeff Bezos, Chrysalix SET and Braemar Energy Ventures, a practical fusion power plant sounds like it might just be attainable. 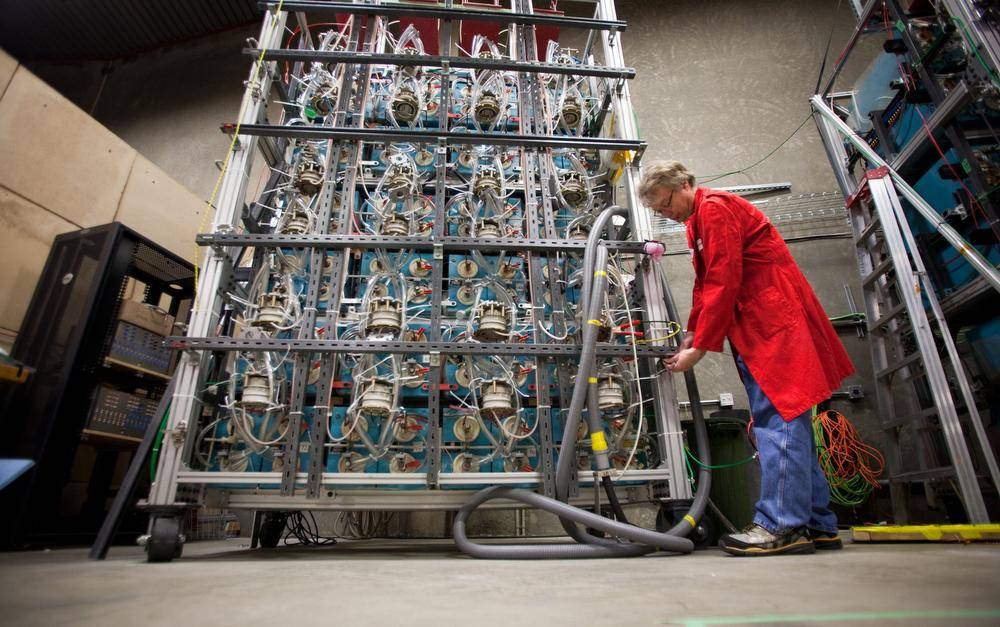 “What we really like about our approach is it’s fairly industrial already, so when we run the math on the economics, we think we can be competitive with coal, without the greenhouse gases,” said Michael Delage, the company’s vice president of business development.

To reach the cost-competitive goal of $0.07 a kilowatt-hour, General Fusion is banking on a “magnetized target fusion” strategy.

Delage explained that in the full-scale prototype, twin plasma injectors resembling five-metre-long cones, each attached to opposite ends of a three-metre-diameter sphere, would pulse a few milligrams of hydrogen gas, heat it until it becomes a plasma, and inject it into a vortex of swirling liquid metal. Electricity circulating in the plasma would create magnetic fields that bind the plasma together and confine the heat.

From there, an array of as many as 300 huge pistons attached to the sphere’s shell would act like synchronized jackhammers, ramming it at 200 km/hr. This would send shockwaves into the very centre of the chamber, compressing the hydrogen isotopes to 100 million degrees celsius — hot enough for fusion to occur, and good enough to generate clean electricity from steam turbines. 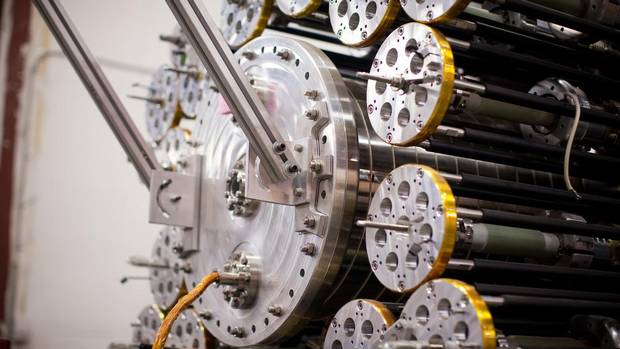 It may sound counterintuitive for an oil and gas firm such as Cenovus Energy to fund research that would theoretically eliminate the need for fossil fuels.

As for the miniature sun analogy?

“For one ten-thousandth of a second, you can call it that,” Delage said. “That’s what the sun is, a big ball of plasma. We’re trying to take a very small piece of that, and create those same conditions for 10 microseconds at the very centre of this reactor, and do it again and again and again.”

A lot of the technology is already working. General Fusion reached its milestones on the piston timing about two years ago. Technicians are now perfecting functionality of the plasma injectors.

“What we’re trying to do is use compression technology that isn’t lasers, but big steam-driven pistons,” Delage said. “Laser is very, very expensive energy; steam is very, very cheap energy.”

Frugality has defined the firm’s modest history since Laberge conceived of his solution in a garage in 2002. General Fusion’s team is encouraged to consider sourcing materials from Costco and Canadian Tire.

The nearly 200 capacitors that send 10-gigawatt bursts into General Fusion’s machine were “recycled” from an old laser fusion experiment in Los Alamos, California.

“They were lying in a gravel lot,” Delage said."Turns out they work just fine, so we put them together to run our system.”

Nevertheless, the Canadians have devised what Mike Sherman, a managing partner with cleantech investor Chrysalix, calls an “elegant” breakthrough that lends itself well practically to power plant design.

“You’re talking about an emissions-free power source,” Sherman said. “There are very few solutions that can really solve the climate change challenge. This is the only one I’m aware of that can effectively and economically address it.” 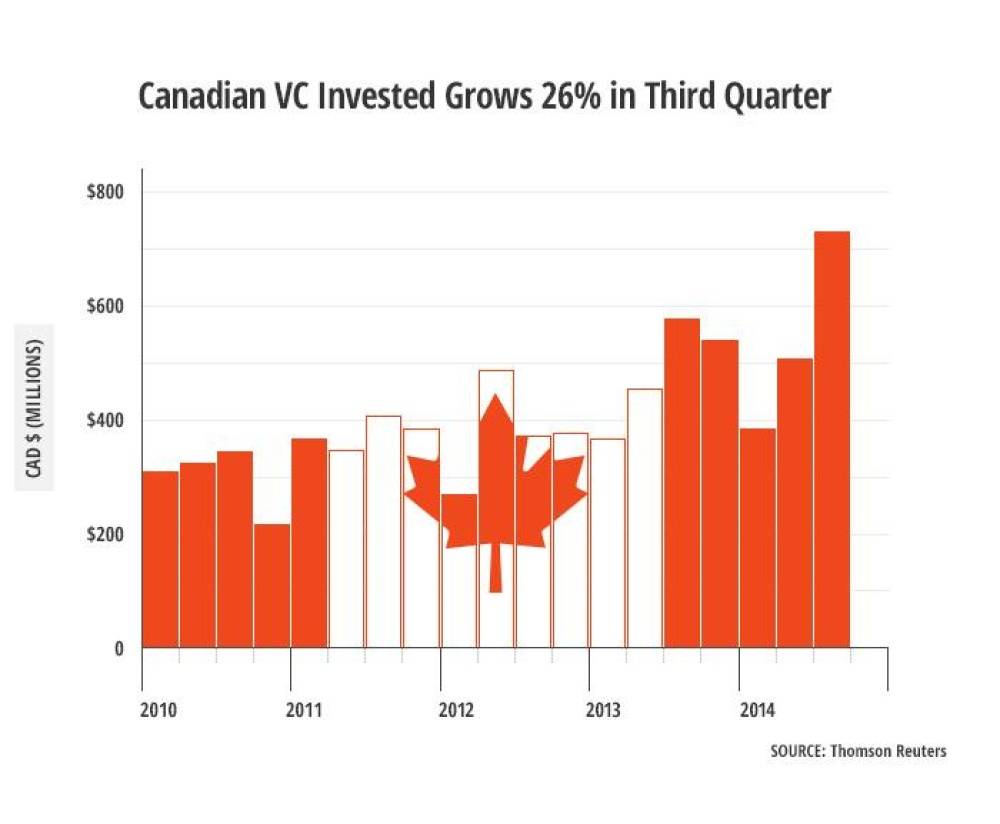 Although Canada remains the only G8 nation lacking a government-funded fusion effort, Laberge trusts that his team of about 70 people in this Vancouver suburb, backed by private capital and leveraging Canada’s Scientific Research and Experimental Development tax credit, will accomplish what nobody else has.

“We’re used to being seen as a small country that doesn’t do big contributions to science,” he said. “We want them to say, 'Hey, the Canadians are doing fusion. Look at that!' We want to show it can be done. And we’re almost there.”