Ontario is awash in water-treatment technologies, tapping into the global demand for clean water, or "blue gold," and quickly becoming a Silicon Valley for water technology.

There are more than 100 water-related research institutes in the region, Mergelas adds.

A September study by WaterTAP projected a 20-per-cent revenue increase and 14-per-cent boost in water-sector job numbers for 2014.

The sector already boasts 900 water-related companies in a province that has pioneered core water-purification innovations used around the world. And, according to WaterTAP, Ontario in the past three decades has granted more "water-related industry patents" than any other jurisdiction of similar size in the world.

Among the companies that spawned the region's startup mentality is Zenon, which introduced reverse-osmosis membranes to separate salts from water — a development Mergelas says is now "industry standard" in desalination. General Electric purchased the award-winning Oakville, Ont.-based company in 2006. in a deal worth more than $760-million.

"There was a time when no one knew about membranes. It was very new and very risky, and Trojan had a similar story," Mergelas said. "Sometimes, when there's a pressing issue, if there's a water-quality crisis it can drive adoption of technologies."

According to Thomson Reuters' Web of Science, Canada ranks fifth in water-treatment research — behind the United States, China, Spain and Japan — and published just under 5 per cent of the world's share of papers. While Canada has plenty of drinkable water, desalination is becoming big business as the need to turn salt water into fresh water becomes increasingly important.

"Leading analysts predict that by 2025, more than three billion people will live in water stress," said William Janssen, CEO and inventor of the Desolenator, in a recent interview with Sustainability, a Thomson Reuters site. Williams, whose company is based in Abu Dhabi, is working on a new mobile water purification technology called Desolenator.

Beyond brackish water, however, there's also a need for treating ultra-high-salinity wastewater produced from oil sands and fracking operations in Canada and the United States.

Philip Jessop, technical director of the government-funded program GreenCentre Canada, helped develop a new kind of solvent at Queen's University in Kingston that would allow a molecule to go from its neutral form to a salty form and back to its neutral form, turning water from a saline solution into pure water.

"We said, 'this is pretty neat.' We've got this low-energy, fresh-water-producing technology that has the advantage of being able to produce fresh water from very high salt-water content," said Howie Honey, chief technology officer of GreenCentre Canada.

"In today's environment, one can't ignore the environmental impacts one is deploying. That mind-set, coupled with Canada's resource-based economy, puts pressure to not only exploit our technologies and resources, but to make sure those resources are being used appropriately." 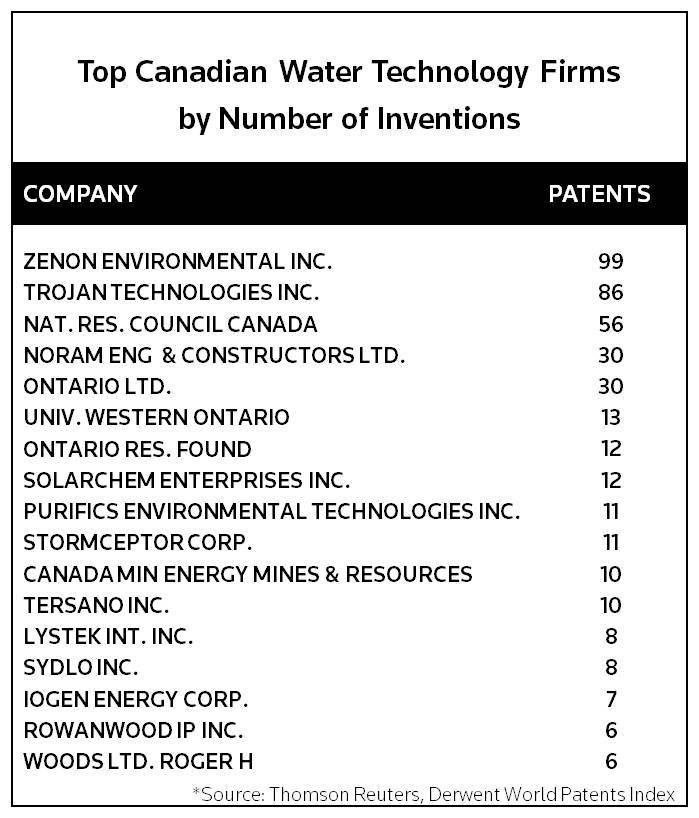