When it comes to managing a building's cooling and heating costs, just look up. It turns out there's a lot to be learned from the birds and the bees, according to Toronto-based REGEN Energy.

The clean tech firm co-ordinates HVAC (heating, ventilating and air-conditioning) systems by tapping into the ability of insect colonies and flocks of birds to display a greater collective intelligence.

It's a trend that also aligns with a Reuters Intellectual Property & Science report. Using Thomson Reuters Web of Science data, the June study predicted world innovation in 2025 would include a "digital everywhere" science landscape, owing to improvements in semiconductors and network technologies.

REGEN is embracing the digital movement as the energy management company that created Swarm Logic™ to optimize and control energy consumption patterns in buildings. Technicians mount wireless controllers into rooftop HVAC units, which "talk" to each other electronically and co-ordinate what will run and what will reduce electrical loads while maximizing comfort.

The benefits of reducing energy consumption are win-win: it's greener to do so, and companies and consumers can also save billions of dollars. U.S. federal energy efficiency programs are projected to save $570-billion through 2020, according to a Thomson Reuters blog on sustainability, citing a recent World Resources Institute report.

REGEN's swarm energy management controllers hang on a rack for testing at the Canadian company's downtown Toronto office, as hardware and firmware engineer Lawrence Posada works on coding firmware. REGEN has more than 400 customers in North America, and the devices are used in buildings such as schools, big-box retailers, movie theatres and the Toronto Cricket Skating and Curling Club. 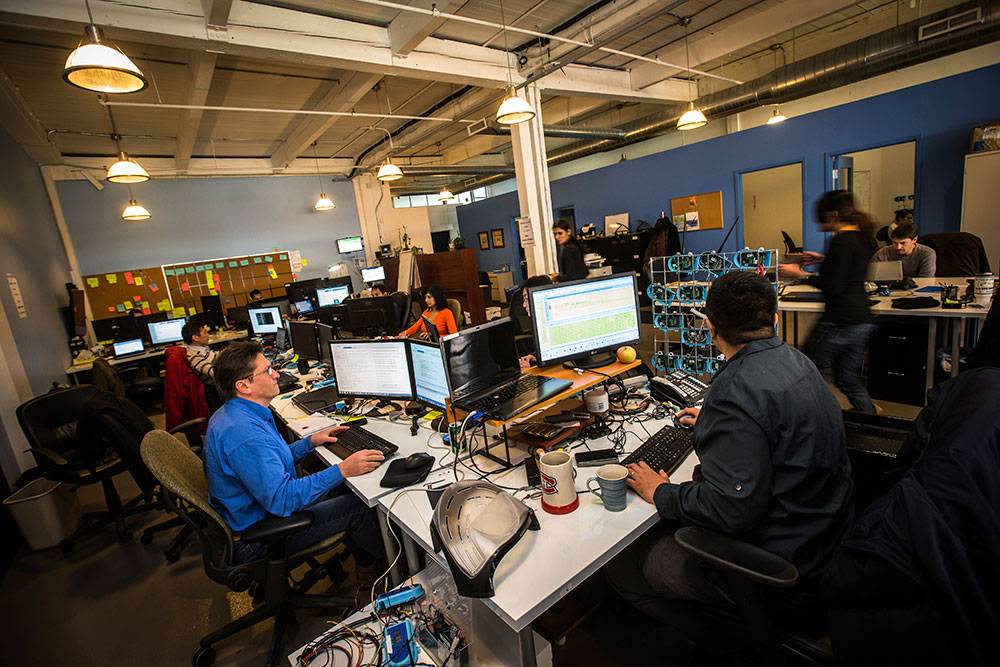 REGEN Energy's development team works on software and hardware engineering for the company's Swarm Logic ™ controllers. Heating, ventilating and air-conditioning of buildings typically accounts for about half of their energy use. REGEN's wireless controllers are installed in rooftop HVAC units, and communicate constantly to measure operational and resting times for individual units in order to reduce consumption while maintaining comfort. 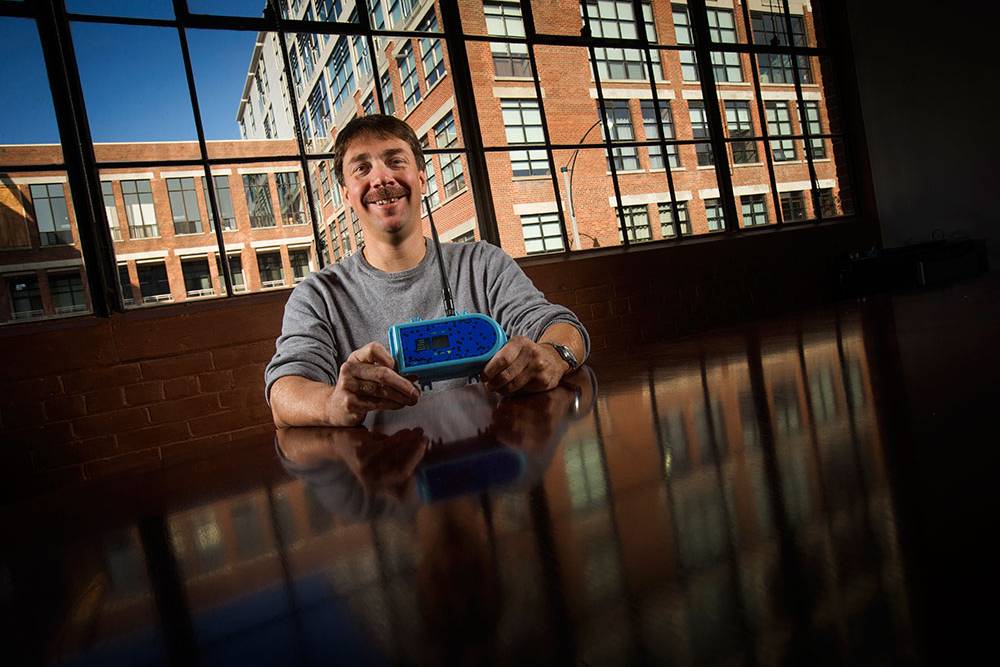 REGEN's executive vice-president of engineering, Andrew Stickler, poses with a swarm energy management controller at the company's downtown Toronto boardroom. The devices are 10.85 centimetres tall, and 15.89 centimetres wide, left to right. A client's rooftop system may have between a dozen and 15 controllers on it, while a minimum of four pieces of HVAC are typically needed for the fleet of controllers to communicate. 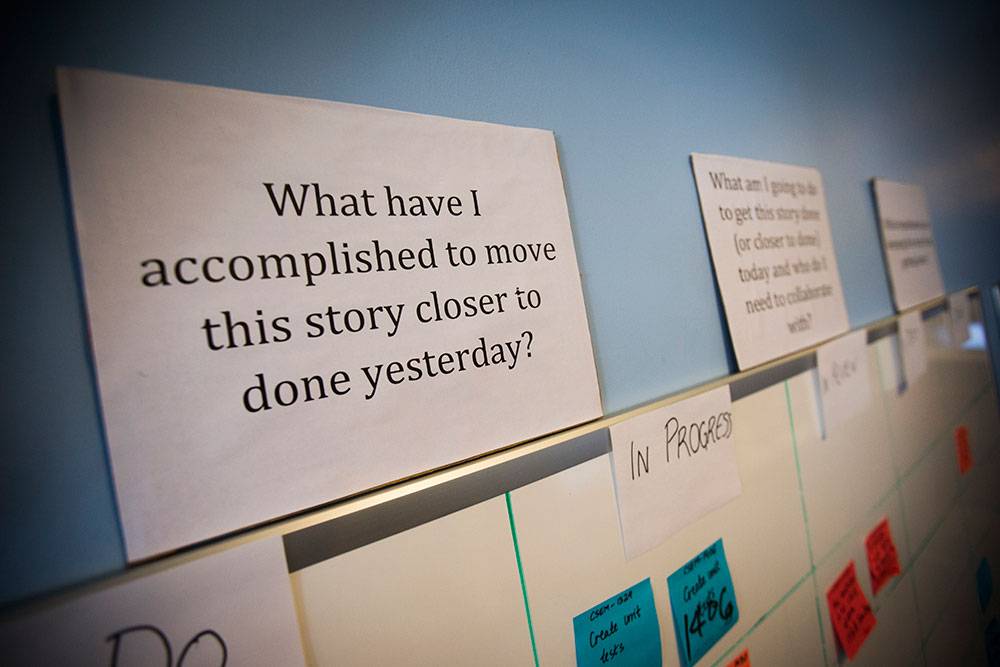 A development "scrum process" board inside REGEN Energy's downtown Toronto office lays out project deadlines and tasks such as the release of new firmware for uploading to cloud-based services. 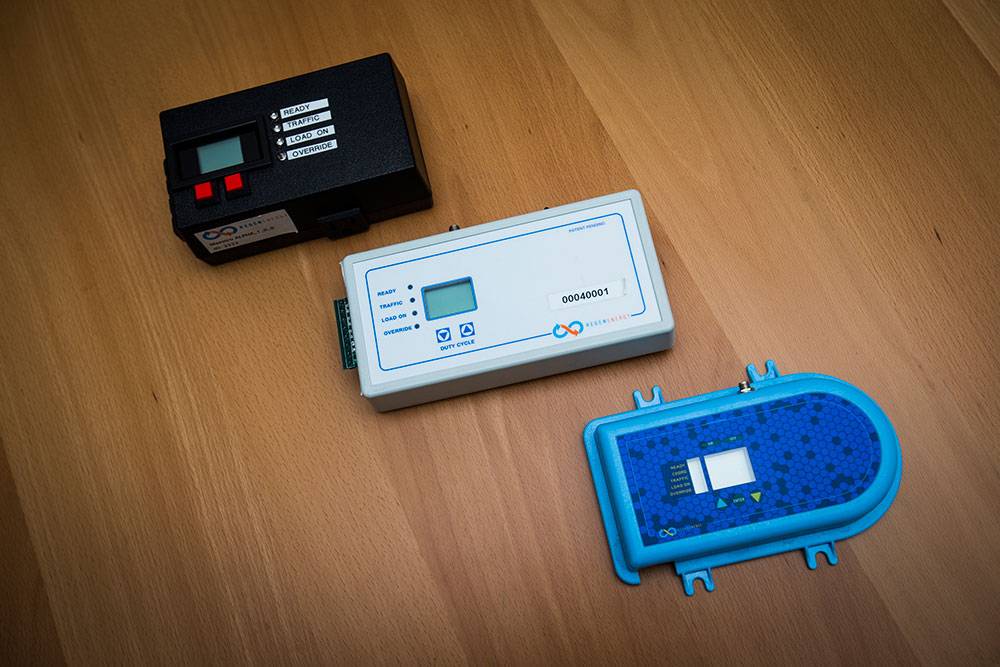 Three generations of REGEN Energy's swarm energy management controllers are displayed at the Canadian company's Toronto office on Nov., 20, 2014. The black box controller at the top was the earliest version, built around 2006, for testing of the company's software intellectual property. The white device is version one of the controller, which was introduced in 2008, and released into the field. The current generation, version two, has been used since 2011, although the software that makes it run has been updated dozens of times. 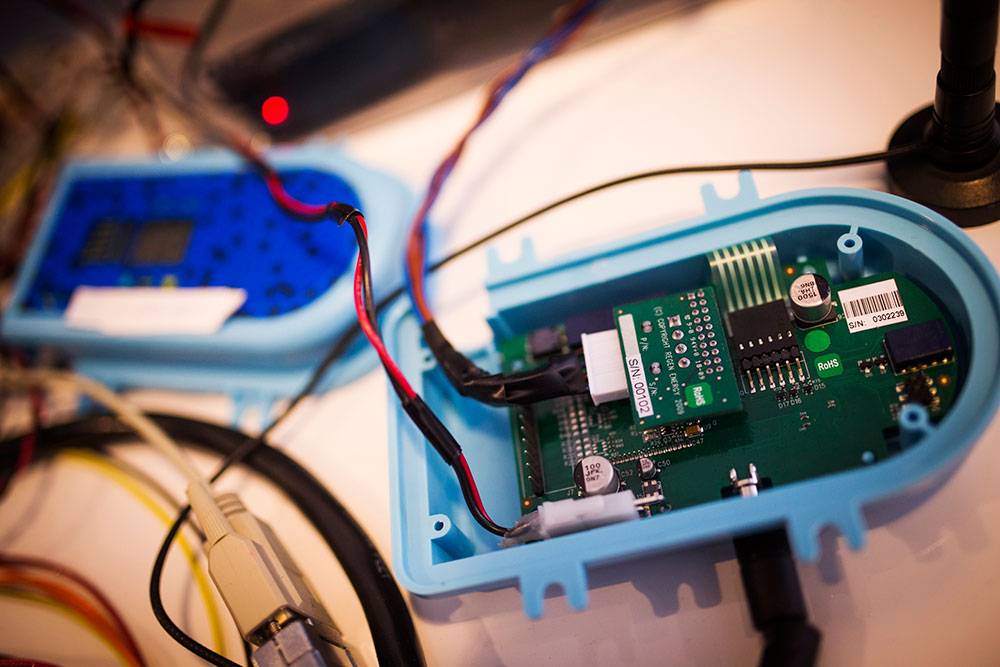 A look at the guts of one of REGEN's swarm energy management controllers reveals the circuit board with a communication module and a motherboard. About 7,000 of these controllers are in the field today, controlling more than 80 megawatts of electrical loads in buildings across North America, according to REGEN. The Toronto development team is performing software and firmware testing on this device. 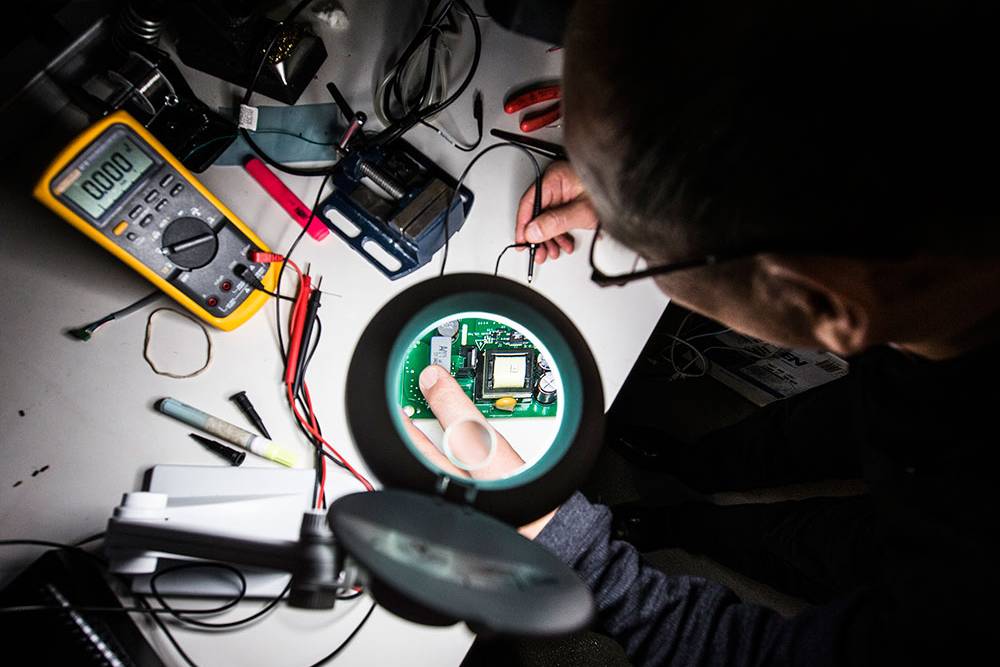 A REGEN employee tests a swarm energy management controller's hardware board using a volt meter before it's mounted inside a casing. The board is the brains of the controller, which helps to facilitate communication, and it is where REGEN's patented Swarm Logic™ algorithms are stored. 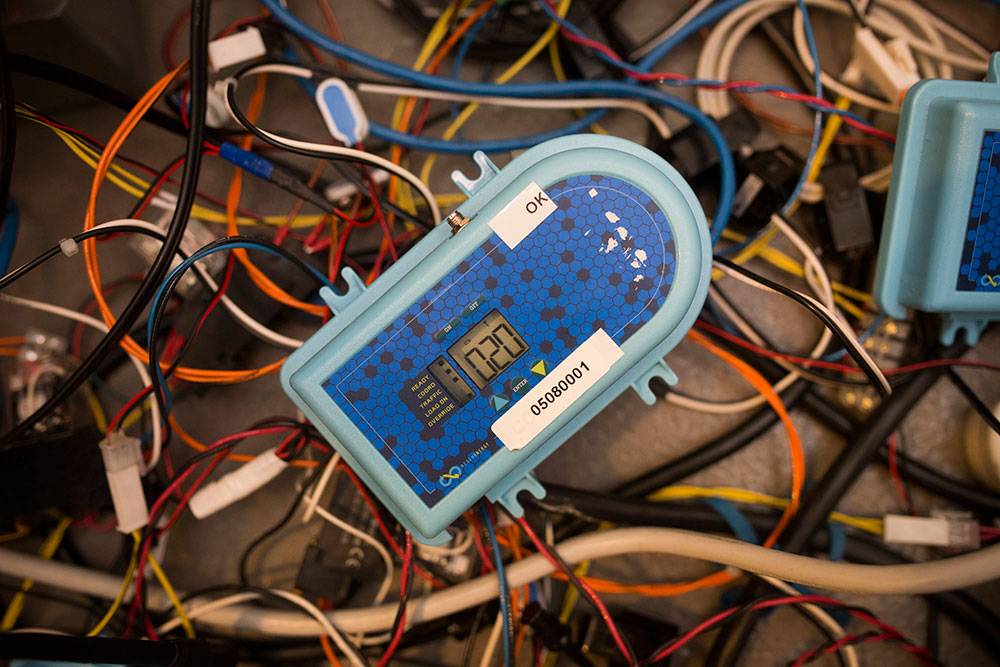 Before REGEN's wireless controllers are sent off and mounted to HVAC units, they must be tested by the company's development team to ensure reliability. Here, a multitude of controllers are connected to current transformers to simulate loads. The reading on the display refers to the amount of "duty cycle" control, meaning the HVAC unit attached to this device would be running at a maximum of 20 per cent of the time. 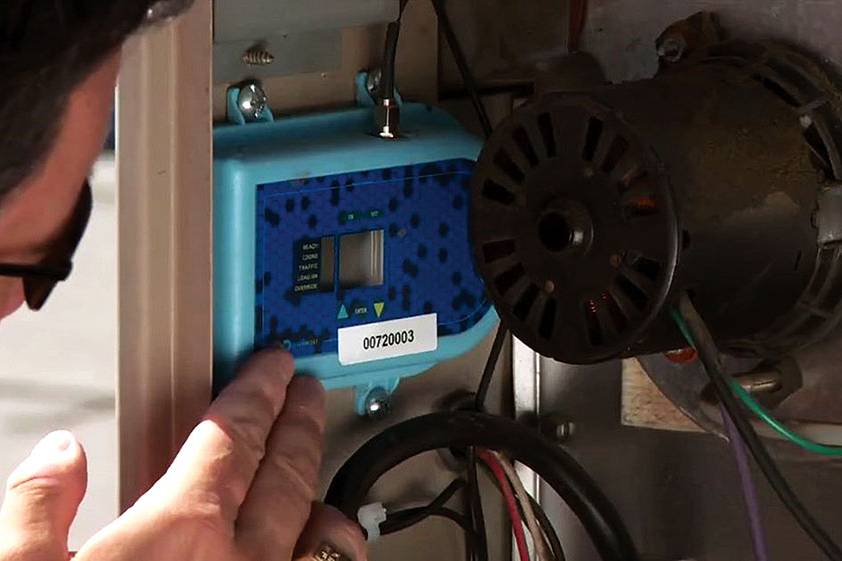 Mark Kerbel, co-founder of REGEN Energy, inspects a swarm energy management controller mounted inside a rooftop HVAC unit. Kerbel and Roman Kulyk, the company's other co-founder, came up with the idea of using Swarm Logic™ to better control how heating and cooling systems turn on and off after the Northeast blackout of 2003 left Toronto in darkness. REGEN mounts controllers to HVAC units, which communicate with one another, and are able to dynamically smooth out peak demand loads. The company says this is a more sustainable way to manage energy than rolling blackouts or load-shedding to balance electrical supply and demand. 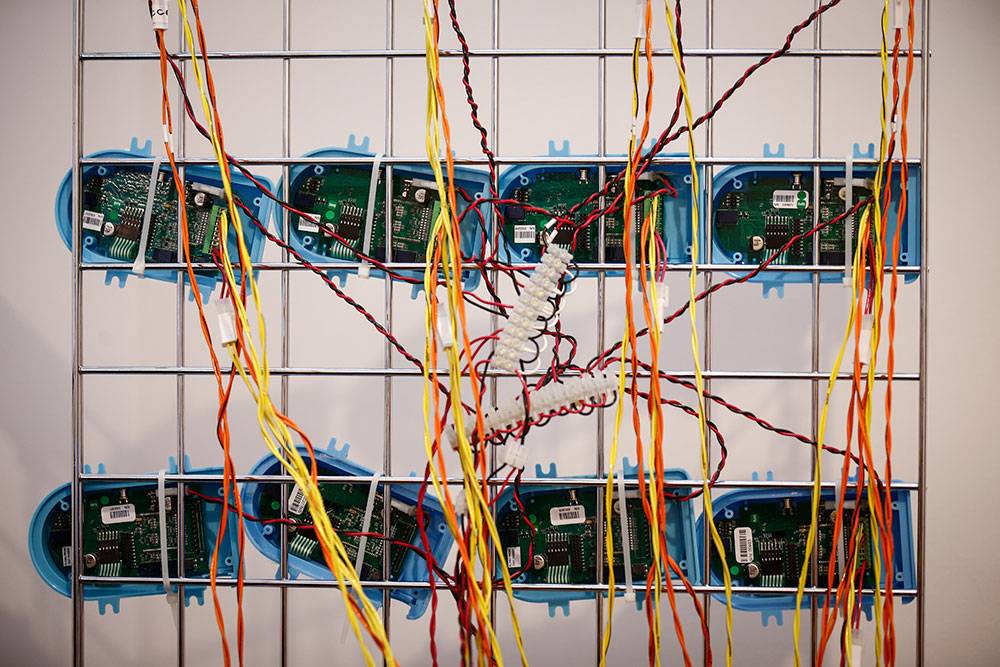 A test board is shown with several of REGEN Energy's swarm energy management controllers in the company's office in downtown Toronto, Nov., 20, 2014. The controllers are wired up in an isolated "sandbox" computing environment so developers can monitor how the devices are wirelessly communicating with each other and simulating load control. A building client's rooftop might show many controllers operating at 50 per cent to 80 per cent duty cycles. 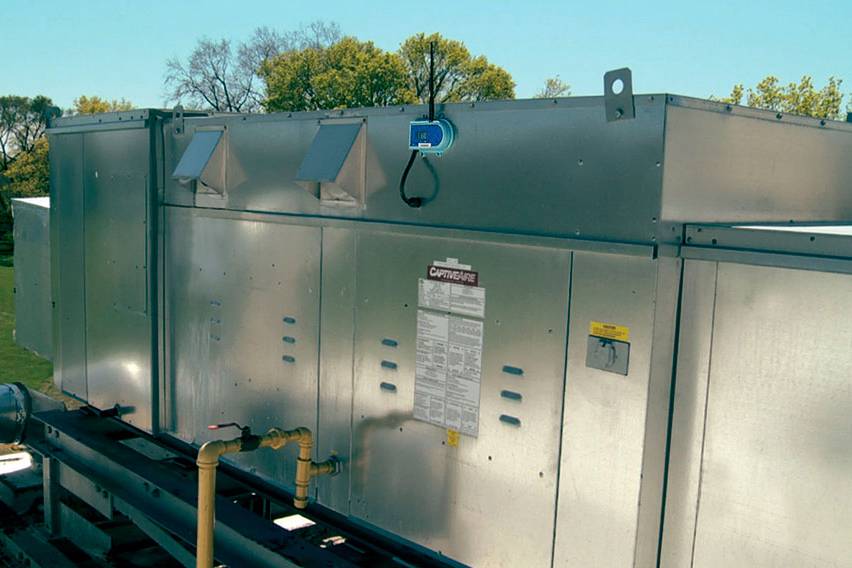 A rooftop view from the Toronto Cricket Skating and Curling Club shows a REGEN Energy controller mounted to an HVAC unit. Steve Pataki, the club's facilities manager, says the use of REGEN's technology has saved the building tens of thousands of dollars in hydro costs over the years.