The Conservative Party should forget about Maxime Bernier and concentrate on what matters: preparing for the first issue-based election in three decades.

In most elections, voters either choose Leader X to mind the store, or Leader Y to bring change. But every now and then, there’s an issue election. Issue-based elections are fought more fiercely, and leave lasting divides. In federal politics, the last one was in 1988, over free trade. We could be about to have another, over climate change.

“An issue election sees a particular issue or set of issues play an unusually prominent role in shaping the ‘minding the store’ or ‘time for a change’ conversation," says John Duffy, whose book on Canadian elections, Fights of Our Lives, contained a chapter on the free-trade contest. In such an election, “passions run higher," he observes.

In such a contest, Mr. Bernier who has left the Conservative Party – taking no defined constituency with him – is likely to be ignored, just as Preston Manning’s new Reform Party was ignored in the election of ’88. Issue-based elections are either-or. Third choices are mostly shunted aside.

For those who still have their own teeth, here’s what happened in 1988: Brian Mulroney’s Progressive Conservative government had negotiated a free-trade agreement with the United States. Liberal Leader John Turner opposed the agreement and vowed to scrap it. The debate dominated the election that Mr. Mulroney called that fall.

The labour movement and social activists mobilized to support the Liberals and Ed Broadbent’s NDP. Corporate Canada rallied behind the Progressive Conservatives. Passions reached levels not seen since the fights over conscription during the two world wars. But the Progressive Conservatives prevailed, and today most people agree that free trade has been good for Canada.

But the election “was hard on the country. It was divisive,” recalls John Courtney, professor emeritus of political science at the University of Saskatchewan, who is a leading authority on Canadian elections. Emotions were rubbed raw. The ideological polarization and regional alienation lasted for years.

How does the climate change issue mirror the free-trade debate? First, each side is implacably opposed to the other’s position.

Justin Trudeau’s Liberals believe global warming poses a direct threat to Canada and to the planet. Demanding that the provinces put a price on carbon emissions, or Ottawa will do it for them, is his government’s way of meeting that threat.

Andrew Scheer’s Conservatives believe that taxing carbon is a burden on consumers and business. Canada’s contribution to global warming is minuscule. There are better, less punishing ways – although the Conservatives don’t spell them out – to reduce emissions. The tax must go.

Second, as with the free-trade fight, the Ontario premier will be part of the mix. Back then, Liberal Premier David Peterson fought against free trade. Next year, Progressive Conservative Premier Doug Ford will doubtless campaign against the Liberals and carbon taxes.

As in 1988, the result in 2019 is likely to be emphatic: Carbon taxes will either become entrenched or they will be gone. And also as in 1988, the campaign could be particularly nasty.

But Mr. Duffy reminds us that even issue elections include other issues. Next year, immigration policy might also be part of the debate. The Liberals defend their handling of tens of thousands of refugee claimants who have crossed into Canada illegally, and depict Conservative criticism as racist. The Conservatives, in turn, accuse the Liberals of failing to control the border.

Mr. Bernier, who opposes “extreme multiculturalism,” may or may not succeed in injecting himself into this issue. But few voters are likely to vote based solely on this issue, and to cast that vote for the maverick MP from Beauce.

Free trade with the United States will once again rear its head. If the government secures a renewed North American free-trade agreement with the Trump administration, the Liberals will take full credit for saving NAFTA. If they fail, the Conservatives will accuse them of betraying Canadian workers. (Irony of ironies, considering where they were in 1988.)

And, as in every election, voters will be taking into account who they think is the stronger and more effective leader.

History never repeats itself exactly. But on the issue of the carbon tax, as on the issue of free trade three decades ago, Canadians are going to be offered a clear choice on a complex, important topic. Looking back, most agree that Canadians made the right choice in 1988.

What is the right choice on the carbon tax? It could take an election to decide. 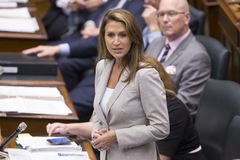