Justin Trudeau and Donald Trump both had reasons to be smiling Monday at their respective news conferences on the new trade agreement. But for the Prime Minister, that grin seemed a little bit forced.

The Liberal government deserves high praise for preserving tariff-free access to the all-important American market. But to retain that access, Ottawa made sacrifices.

“We did as well as we could have, given this mercurial and unpredictable President and protectionist administration,” said Dennis Darby, head of the Canadian Manufacturers & Exporters trade association. In an interview, he judged that the best that could be said of the new agreement was that “Canada didn’t lose a lot of ground.”

Nonetheless, under Mr. Trump, the United States is less of an ally and more of an adversary than at any time since the Second World War. This new trade agreement simply reflects that truth.

What has been dubbed the USMCA (United States-Mexico-Canada Agreement) forces Canada and Mexico to rewrite their rules – on automotive manufacturing, on intellectual property, on agricultural protections – to accommodate U.S. demands. Punishing steel and aluminum tariffs remain in place.

On any other day, with any other president, Canada would never have agreed to this.

“Every deal we have is a loser,” Mr. Trump told reporters in the White House Rose Garden. Because “we are the one that people want to come and take from. And I’m talking about every country.” He has already launched a trade war with China. And look out India and Brazil, you’re next. On trade, the United States has become a thug.

Mr. Trudeau tried to be positive in his news conference on Monday afternoon.

“Today is a good day for Canada,” he told reporters. Canada “preserved the major parts of NAFTA,” he said, “Free and fair trade in North America ... is in a much more stable place than it was yesterday.”

And in the short term, he’s right. The 11th-hour-and-59th-minute agreement was a huge win for the Liberals, who can now fairly claim to have nailed down trade agreements with the European Union and the 10 other members of the Trans-Pacific Partnership, while preserving free trade with the United States and Mexico.

The Conservatives will point out that Stephen Harper launched the European and Pacific talks. They can claim they would have negotiated a better successor to the North American free-trade agreement. But the fact remains that, on trade, the Liberals got the job done.

But at no small cost. Not only do steel and aluminum tariffs remain in place, Canada’s intellectual property regime will now echo American priorities. As Mr. Darby points out, the Canadians initially hoped the talks could modernize and improve the original NAFTA – recognizing that the North American economy today is as much about services as goods, and making it easier for workers, as well as products, to cross the border.

All that went overboard. The agreement released today is essentially the old NAFTA, but tilted more in the Americans' favour.

The losers are angry. “The Liberals made concession after concession, until the Trump administration got the deal it wanted," Ken Neumann, Canadian director of the United Steelworkers, said in a statement. "In the process, [the] Canadian government sold out Canadian steel and aluminum workers. So much for the ‘win-win-win’ deal promised by this government.” It’s hard to disagree.

In a world where the United States no longer leads the global trading order, and instead threatens to wreck it, Canada needs to seek alternatives. For decades, politicians and business leaders have talked about diversifying trade, but retreated, instead, into the comfortable American market. The near-death experience of almost losing NAFTA completely is the mother of all wake-up calls.

This won’t happen quickly. “It took us a generation to integrate our economy with the U.S.,” Mr. Darby observed. “It will take another generation to diversify our trade.”

If so, then it’s high time we got started. Because the United States can no longer be trusted.

Opinion
NAFTA gets a new name, but little else has changed
October 1, 2018 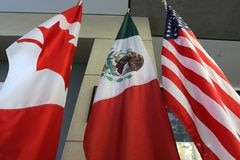 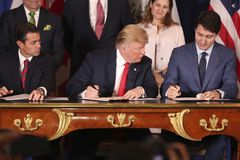 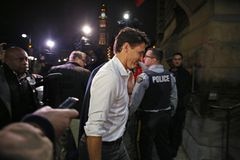