There are two words that Sonny Perdue used this week that should have special meaning for NAFTA negotiations: short term. The Canadian ministers who travelled to Mexico to meet the country’s outgoing and incoming presidents should take note, because it might mean a small window of opportunity for the North American free-trade agreement.

The U.S. Agriculture Secretary was talking about the US$12-billion aid package the Trump administration is rolling out, subsidies aimed at helping U.S. farmers who are hurting in the trade war U.S. President Donald Trump started.

That aid package was put together to shield farmers from retaliatory tariffs. Those farmers are notably in so-called red states that support Republicans and Mr. Trump. It’s to protect a part of Mr. Trump’s base. But then, Mr. Perdue noted it was “a short-term solution” to give the President time to work on trade deals.

That suggests the United States doesn’t really want to fight a long trade war on all fronts, with China, the European Union, NAFTA partners and so on. It would be better for farmers if Mr. Trump could settle some. He likes trade war rhetoric, but he’s facing pressure, too, and not just from farmers. Stock markets are volatile. Republican members of Congress bashed his farm aid package as lefty, command economics.

On Wednesday, there was a signal that Mr. Trump might be looking to wrap up some of the trade fighting. He announced a ceasefire with the EU, where both sides agree not to impose new tariffs, and work to open trade.

It’s hard to say how solid a truce it will be. But, it suggested that in some cases Mr. Trump might move from ratcheting up the trade war to arguing that he is forcing trading partners to come to Washington to make concessions.

That could mean there’s a window of opportunity for NAFTA, too. And that’s why Canada needs Mexico on its side right now.

The United States has leverage in a trade war with Canada and Mexico because of its bigger economy. The other two depend more on trade with their neighbour. But together, their retaliatory tariffs have more impact, notably when it comes to the Trump administration’s soft spot, agriculture. Canada and Mexico were the largest and third-largest export markets for U.S. agricultural goods, buying US$39.1-billion in American agricultural goods in 2017. Mexico, which opened up its market to food imports in NAFTA, imports Midwest mainstays such as corn and soybeans. In a North American tariff war, it’s good to have Mexico as an ally.

That’s why it was good for the Canadian ministers in Mexico − Foreign Affairs Minister Chrystia Freeland, Finance Minister Bill Morneau and Trade Minister Jim Carr – to hear Mexican Economy Minister Ildefonso Guajardo say publicly that Mexico is only looking for a trilateral deal. Some have wondered whether Canada should ditch Mexico to do a two-way trade deal with Mr. Trump, but right now, it is a weighty ally.

It would have been a lot better to hear that public commitment to trilateralism from Mexico’s president-elect, Andres Manuel Lopez Obrador. Mr. Guajardo is from the outgoing administration. Mr. Lopez Obrador becomes president on Dec. 1, and his commitment is what counts. The Canadian ministers met with Mr. Lopez Obrador and his team, and insisted they see the incoming president as being equally eager to co-operate with Canada.

Mr. Lopez Obrador might represent opportunity, too. He came to power as a populist leftist promising to cut his own salary, sideline the elites and help the little guy. He might accept one of Mr. Trump’s demands – raising wages in Mexico’s auto sector – if some exceptions are worked out. The president-elect is reportedly eager to see a deal worked out before he takes office, so the political burden is not squarely on his shoulders.

As Ms. Freeland noted, there are still major obstacles. One is the U.S. demand for a “sunset clause,” which would see a new NAFTA expire after five years, unless it is renewed. The Canadian government is dead set against it. On Wednesday, Mr. Guajardo indicated it would be a deal-breaker for Mexico. There won’t be a deal unless Mr. Trump drops that demand. But after weeks of dormant talks, there’s a moment of NAFTA hope. 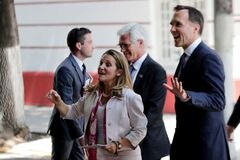