Human-rights activists are urging Parliament to recognize the abuses against Muslim Uyghurs in China as genocide and doubling down on calls for Canada to impose sanctions on Chinese officials responsible for the repression of the minority.

Former Liberal justice minister Irwin Cotler was among the long list of witnesses who detailed China’s treatment of the Uyghurs during a seven-hour hearing before the House of Commons human-rights subcommittee Monday. Mr. Cotler, an international human-rights champion, said Parliament should take global leadership by recognizing the abuses against the Uyghurs in China’s western province of Xinjiang as genocide. He said the world risks failing the Uyghurs through inaction, as it did with the Rwanda genocide in 1994.

“What makes that [Rwanda] genocide so unspeakable is that it was preventable. Nobody could say we did not know. We knew but we did not act, just as now with regards to the Uyghurs,” said Mr. Cotler, who serves as chair of the Montreal-based Raoul Wallenberg Centre for Human Rights.

My Uyghur family is quietly living in fear. This is how we become lost

More than one million Uyghurs have been detained in camps by Chinese authorities, according to the United Nations human-rights commission. China denies abusing the minority, saying they are vocational training camps. The Globe and Mail has reported on the treatment of Uyghurs, speaking to former detainees who recounted brutal treatment, political indoctrination, forced labour and surveillance of minorities in Xinjiang.

A recent report by the Associated Press exposed the Chinese government’s systematic efforts to slash birth rates among the Uyghurs, including the subjection of women to pregnancy checks, forced intrauterine devices, sterilization and abortion.

Genocide is defined in the 1948 Convention on the Prevention and Punishment of the Crime of Genocide as “acts committed with intent to destroy, in whole or in part, a national, ethnical, racial or religious group.” Speaking to the committee Monday, Uyghur activists said the human-rights violations against their people constitute genocide.

“I think the Chinese government is perfectly laying the ground work for eradicating the Uyghur people as a whole,” said Rayhan Asat, president of the American Turkic International Lawyers Association.

Ms. Asat’s brother, Ekpar Asat, went missing in Xinjiang in April, 2016, and was sentenced to 15 years in prison on charges of “inciting ethnic hatred and ethnic discrimination.” Ms. Asat has been advocating for her brother’s release since his disappearance but hasn’t heard from him in more than four years.

Amnesty International Canada Secretary-General Alex Neve said his organization has not taken a position on whether the atrocities against the Uyghurs constitute genocide but said that should not stop Canada from taking action to put pressure on China.

“Even while the debate about whether it is or is not genocide continues, there is nothing that should postpone robust, meaningful and much more forceful action.”

The committee also heard calls to follow in the footsteps of the United States, which recently imposed sanctions against a top member of China’s Communist Party and three other senior officials in response to human-rights violations against minorities in Xinjiang, including the Uyghurs.

Mehmet Tohti, executive director of the Uyghur Rights Advocacy Project, said the sanctions would show Chinese President Xi Jinping and his officials that Canada is watching. Mr. Tohti fled Xinjiang after speaking out about discrimination against Uyghurs in 1991; he says 38 of his family members have disappeared since he left China.

In 2017, Parliament passed the Justice for Victims of Corrupt Foreign Officials Act, which allows Canada to impose asset freezes and travel bans on human-rights abusers around the world. The law, also adopted by the U.S. and many European countries, was inspired by the killing of Russian whistle-blower Sergei Magnitsky.

Last week, Foreign Affairs Minister François-Philippe Champagne said Canada “takes note” of the U.S. Magnitsky-style sanctions against Chinese officials, but did not indicate whether Ottawa intends to follow suit. His office did not respond Monday to calls for Parliament to declare the abuses against the Uyghurs genocide.

Canadian Magnitsky-style sanctions could spur retaliation from China – the likes of which Canada has already felt.

The December, 2018, detentions of Michael Kovrig, a former diplomat, and entrepreneur Michael Spavor in China were widely seen as retaliation for Ottawa’s arrest of Huawei Technologies Co. Ltd. executive Meng Wanzhou on a U.S. extradition request. The Canadians are still detained today.

The committee will hold another seven-hour hearing on the plight of the Uyghurs on Tuesday. 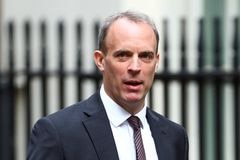 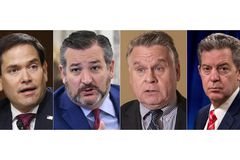