Canada’s Immigration Minister is being urged to rescue a small number of Afghanistan translators who worked alongside Canadian soldiers in Kandahar and now fear for their lives after being branded traitors by the Taliban.

Red T, an international non-profit organization created to protect translators who work in conflict zones, sent a letter to Ahmed Hussen on June 20 asking for a meeting to discuss the plight of the men who spoke on behalf of the Canadian military to fellow Afghans during the war.

“To escape persecution by insurgents, many of these linguists have been forced into hiding in their home country or escaped only to be stranded in Europe,” where they are homeless or stuck in refugee camps, said the letter written by Maya Hess, Red T’s president.

When the situation of the former interpreters was previously raised with the Canadian government, Ottawa responded by saying the Afghan men would have to apply to come to Canada through existing immigration channels, Ms. Hess said.

“However, this represents an extreme hardship for them due to the perils of openly travelling in Afghanistan; the difficulties of applying while homeless or in a refugee camp in Europe [and] the challenge of the application process itself, including proof of persecution, which is often impossible to procure,” she wrote in her letter.

In a telephone interview Tuesday, Ms. Hess said she has yet to get a response from Mr. Hussen.

The interpreters "were the face of the [NATO] coalition and, as a result, they can’t show their faces any more because they are considered traitors,” Ms. Hess said. “They basically have no life, and their families are threatened, too.”

Questions put to Mr. Hussen’s office on Tuesday were redirected to the Immigration Department, which said in an e-mail: “No special measures for Afghan interpreters are planned at this time.”

In 2009, the former Conservative government created a program that allowed interpreters who could demonstrate they faced extraordinary danger as a result of the work they did in Afghanistan to take refuge in Canada. That ended in 2011 and about 800 of the interpreters and their families have resettled in this country.

Exactly how many remain at risk in Afghanistan, and are seeking asylum, is uncertain. A list compiled by one of the men names 37 interpreters who served with the Canadian military between 2005 and 2011 and are in need of refuge. But it is unknown how many of those men are still alive and have not managed to flee the country.

Erin O’Toole, the Conservative foreign affairs critic, said he too has written to Mr. Hussen asking for help for the former interpreters.

“From what I can see, there are fewer than 10,” Mr. O’Toole said. “There are three that we have looked into. They look legitimate. They have sent, in some cases, the certificate that Canada gave them at the end of their time.”

Ms. Hess said it is simple for the Canadian government to prove that the men did the work they claim. Their employment records are on file with the military, as are their fingerprints, she said. And they can name the members of the Canadian Forces who worked with them.

Nor is there a dispute about the danger they face, Ms. Hess said.

Interpreters who have found new homes in Canada talk about death threats and bounties of $10,000 that were placed on them by the Taliban. One told a Canadian newspaper last year that many of his friends were beheaded.

Former immigration minister John McCallum helped a translator, who was living in a refugee camp in Germany after his parents were murdered in Afghanistan, come to Canada in 2016. But others remain in limbo.

The Conservatives agree with the Liberal government’s offer to resettle up to 50 members of the White Helmet rescue group and their families who escaped from Syria last weekend with the help of the international community, including Canada.

“If we are going to do this for the White Helmets,” Mr. O’Toole said, “we should also include literally this handful of interpreters who are at risk because they helped Canada.” 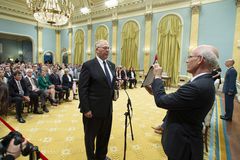