Driving around communities at the far end of the Progressive Conservative government’s proposed highway west of Toronto, it’s not hard to find a sprinkling of yellow lawn signs that read: Stop the 413.

You’ll find one stuck in the middle of Janet Duval’s neatly trimmed front lawn in Georgetown, Ont., in front of her white two-storey home backing onto a lush ravine on the east side of town. It’s just a few kilometres from the corridor reserved for the highway, the centrepiece of Doug Ford’s re-election campaign.

A retired teacher, the 73-year-old Ms. Duval has lived in the town, which is part of the municipality of Halton Hills, for 45 years. There’s a Prius in her garage, and a canoe in the rafters that she and a group of friends still take on annual trips up north. In the past few years, she has thrown herself into environmental activism, helping to lead groups called Halton Hills Climate Action and Stop Sprawl Halton.

Both are part of a patchwork of small organizations across the greater Toronto area that have sprung up to combat both the 413 and the PC government’s planning policies, which have relaxed rules meant to curb suburban sprawl. 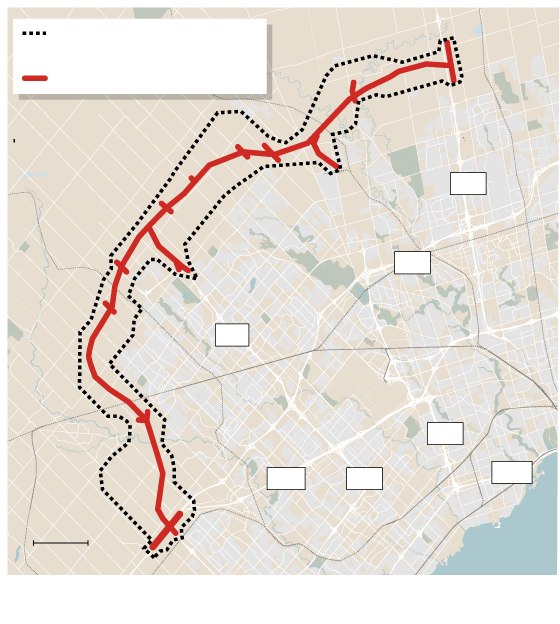 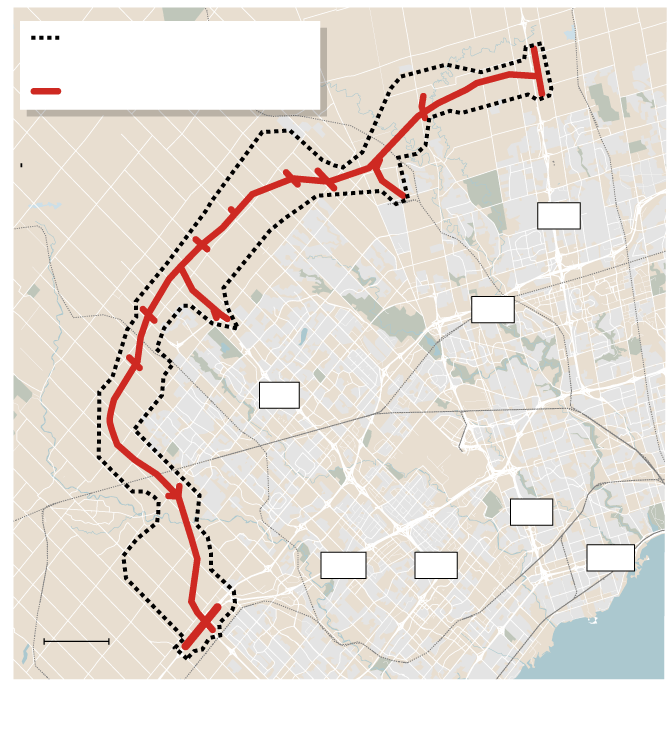 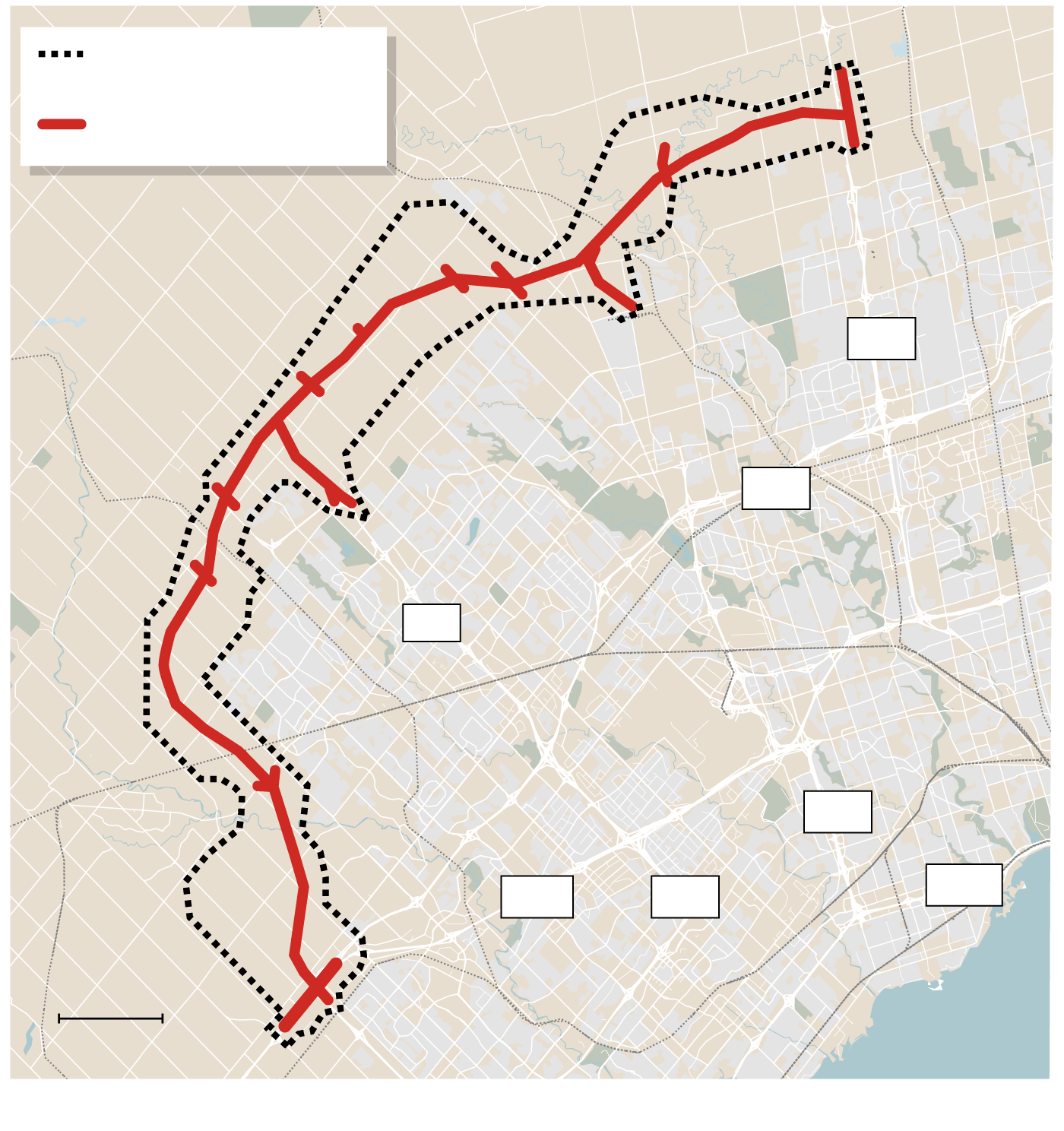 It’s unclear whether these grassroots groups will affect the outcome of the election in these areas, many of which are considered safe seats for PCs. But it is clear that support for Mr. Ford’s vow to build the 413, which will pave parts of the protected Greenbelt, is not unanimous amid growing concern over climate change.

“I lie awake thinking of my grandchildren. That’s who I do this for,” said Ms. Duval, who acknowledges that her own neighbourhood, with its winding streets and large lots, is an example of the sprawl she now fights. “It’s terrifying, the future they face, if we don’t change.”

Mr. Ford says often that only “downtown activists” oppose his highway. But Ms. Duval, and others like her, suggest otherwise. And these suburban insurgents have made recent gains. Several municipalities along the route, including Halton Hills, have passed anti-413 resolutions. Halton Region, of which Halton Hills is a part, also recently bucked a provincial directive to designate more farmland for development, after a concerted activist campaign.

The PC government’s pitch is aimed squarely at commuters: The new highway, it says, would save drivers 30 minutes each way. But Ms. Duval and other opponents of the 413 are quick to dismiss this argument, citing the long-established conclusions of many traffic experts that new highways inevitably fill up with new cars, as they encourage more sprawl and induce more people to drive.

“It’ll just fill up again,” Ms. Duval said. “We have to develop differently if we want to save this planet.”

When trumpeting the 30-minute time savings, the PCs often fail to mention that only a small number of drivers would experience this benefit – and 19 years from now, in the year 2041.

But only an estimated 1,200 people would drive the whole distance. Motorists using only part of the road would see a smaller impact.

Under theses models, traffic in 2041 is projected to be slower than today – no matter whether the highway is built or not. But, the modelling shows, traffic will be even slower without the highway than with it.

Experts also say the promised improvement may prove fleeting. According to what’s known as the “iron law of congestion,” traffic increases to fill new road space. The concept of “induced demand” recognizes that traffic behaves less like a liquid in a pipe and more like a gas, expanding as space allows.

“People just drive more because there’s more capacity,” said Fanny Tremblay-Racicot, an assistant professor with a focus on urban transportation and sustainable development at the École nationale d’administration publique in Quebec City. “It’s been tested everywhere, so it’s a law, just the law of supply and demand.”

She said recent studies show that just one to three years after construction, a new road fills to capacity.

But as recently as 2020, Ontario’s Ministry of Transportation said that its 413 modelling did not incorporate induced demand.

Want to stay on top of the biggest issues on the campaign trail?

Sign up for The Globe's Ontario election newsletter, send out twice a week until election day on June 2nd.

The disconnect is striking given that Caroline Mulroney, who served as transportation minister through the latter part of the government’s term, is familiar with induced demand. In an interview soon after assuming her portfolio, she said she had not been briefed on the concept. But when a reporter explained it, she was quick to understand. “Build it, they will come,” she said.

Down the road in sprawling Milton, one of the country’s fastest-growing communities perched just past the western end point of the proposed new highway, there is a surprising, simmering debate over the 413 – though complaining about traffic on the clogged Highway 401 is a kind of town sport.

While Milton’s council narrowly voted down an anti-413 motion, the town and Halton Region have long been resisting CN Rail’s new intermodal logistics hub, a $250-million facility that will see hundreds of trucks a day dropping off and picking up vast volumes of freight near the town’s southwest corner.

Residential growth continues unabated, with farmers’ fields and the smell of manure giving way to new subdivisions on the town’s outskirts. Hundreds of new homes have gone up west of Regional Road 25, a stone’s throw from a honey purveyor, and this development is already starting to throw out new tendrils. A half-kilometre to the east, a developer’s sign promises “urban townhomes” – starting in the $600,000s. There are also new condo projects going in closer to the centre of town and near the GO Station.

“I see opposition mounting to the 413. You’re starting to see lots of these little yellow signs appearing on people’s lawns,” said Alan Cooke, a Milton resident who is also a consultant in the logistics industry. “I think there’s a little bit of development fatigue going around Milton at the moment.”

He says even Milton’s growing logistics sector is not sold on the 413. Businesses need quicker solutions than a new highway that could be a decade or more away, he said, in order to get trucks through paralyzing gridlock.

Mr. Cooke says he often drives to Pickering, across the GTA, and cannot get there reliably without using the tolled – and comparatively empty – 407. He thinks the 407 should be taken over, or its use subsidized, to accommodate more commuters or truckers, rather than “destroying countryside that should remain untouched.”

Milton’s long-time mayor, Gordon Krantz, says he speaks for the “silent majority” who support the 413. Asked about his council’s recent narrow vote against an anti-413 motion, he said other politicians are getting “skittish,” hearing from a “vocal minority.”

Mr. Krantz, 85, has been mayor since 1980 and was first elected to town council in 1965. He has overseen Milton’s transformation from a sleepy farm town to a community of about 140,000. (He remembers in the 1950s when many around Milton opposed the building of the 401.)

The mayor says the proposed 413 – and other future highways, to Niagara Region and elsewhere – are going to be needed to keep up with Ontario’s rapid growth, regardless of efforts to build more densely and boost transit. Even in Japan, he said, with a much denser population and excellent transit, there are still many cars. And the GTA, he said, expects to be home to two million more people in 20 years, with Milton alone planning for more than 100,000 new residents.

“Where are they going to go? How are they going to move around?” Mr. Krantz said. “The car’s not going to disappear. … I’m the last person that wants to hurt the environment. I don’t take down a tree unless it’s absolutely necessary. Those things have to be done.

“I call it an evil necessity that needs to be done for the better of the majority of people.“

Supreme Court agrees to hear Doug Ford’s appeal to keep cabinet mandate letters secret
May 19, 2022
Majority of Ontarians dissatisfied with province’s hospitals, long-term care homes, survey shows
May 19, 2022
Ontario NDP, Liberals say they would bring in law to fight Islamophobia and other hate if elected
May 18, 2022