Alberta has stopped administering first doses of Oxford-AstraZeneca’s COVID-19 vaccine, except in limited cases, becoming the only government in Canada to make such a move as other provinces weigh their options with remaining doses of the vaccine.

The change is being made both because Canada has the luxury of relying on two other shots for its mass vaccination campaign but also because of the safety concerns of a very rare but serious side effect associated with AstraZeneca. Viral vector vaccines, like those from AstraZeneca and Johnson & Johnson, are linked to a blood-clot condition that mRNA vaccines, from Pfizer-BioNTech and Moderna, are not connected to.

Ontario’s Chief Medical Officer of Health, David Williams, said Monday that the province is reviewing the use of the AstraZeneca vaccine. He and his counterparts in other provinces are still trying to sort out the “right balance” between the risks posed by the vaccine and the risks of COVID-19.

Last week, the National Advisory Committee on Immunization sparked an uproar when it repeated its advice that the mRNA vaccines are preferred to those from AstraZeneca and Johnson & Johnson – where the risk of COVID-19 is lower and the wait for an mRNA shot is short.

Since then there’s been a shift from provinces and some prominent physicians in Canada. However, other than Alberta, no province announced an immediate change to the use of AstraZeneca Monday.

“Our program is transitioned to giving first doses only with mRNA,” said Kristin Klein, an Alberta medical officer of health and a co-lead of the province’s vaccine task force. “Because we have so much mRNA vaccine, those are the vaccines that we are recommending for people to book their first dose with.”

Dr. Klein said people who can’t get an mRNA vaccine for health reasons or simply don’t want one will still be able to get vaccinated with AstraZeneca.

For people who have already had a first shot of AstraZeneca, Dr. Klein said a decision hasn’t yet been made on what their second shot will be. So far, federal health officials say second shots should match first doses. However, Dr. Klein said a decision will be made based on results from pending international studies on mixing doses, and advice from federal officials.

The federal government has said millions more doses of AstraZeneca will arrive by the end of June. To date, it has confirmed shipments of 655,000 doses in the next few weeks and another one million shots in June.

Procurement Minister Anita Anand said last week that the federal government will keep negotiating to get more doses of AstraZeneca sooner. On Monday, however, her office did not provide a statement to The Globe and Mail on whether that will continue. A spokesperson for Health Minister Patty Hajdu, Cole Davidson, said “all vaccines authorized by Health Canada for use in Canada are safe and effective.”

The AstraZeneca vaccine makes up just a small part of Canada’s vaccination campaign. Of the 18.1 million doses of COVID-19 vaccines distributed in Canada as of May 6, 2.3 million have been AstraZeneca. As of May 1, two million of those doses have been administered, according to numbers provided by the Public Health Agency of Canada.

The vaccine has been central to Britain’s successful inoculation program. However, its campaign was well under way when public attention turned to reports of the blood-clot condition, which occurs in combination with low platelet levels. In contrast, reports of the blood clots linked to AstraZeneca coincided with the rollout of that vaccine in Canada in early March.

According to Britain’s drug regulator, the incidence of the syndrome, called vaccine-induced immune thrombotic thrombocytopenia (VITT), is about one in 100,000. But other studies in Europe put the incidence at one in 26,000. The Public Health Agency of Canada said the estimated rate is evolving but as of April 28, the rate of VITT in Canada was one case for every 100,000 people vaccinated with AstraZeneca.

So far, 12 cases of VITT have been reported by the provinces, and three people have died as a result, spokesperson Anna Maddison said.

Some countries in Europe are also restricting the use of AstraZeneca. But the changes aren’t unanimous.

Norway and Denmark have both decided to stop using it. Even in Britain, officials now advise against using the vaccine for people younger than 40. With less of the coronavirus circulating and more mRNA shots available, the British advisory panel said the balance had tipped against vaccinating any one younger than 40 with a shot that carries even a small risk of VITT.

Germany, meanwhile, expanded eligibility to all adults who want it, provided they seek guidance from their doctors.

In Canada, a new survey from the COVID-19 Social Impacts Network suggests that public trust has dropped along with the changes in public-health advice. Out of more than 1,500 Canadians who responded to the survey, conducted by the polling company Leger last week, only 44 per cent said they would trust the AstraZeneca vaccine for themselves or for a family member – down from 53 per cent in March. In contrast, trust in the mRNA vaccines is running well above 80 per cent.

As doctors and scientists in Canada have learned more about the frequency of VITT, some are coming out in favour of curtailing or even suspending the use of AstraZeneca for first doses, particularly in light of the millions of doses of mRNA vaccines scheduled to flood into Canada this month and in June.

“At a minimum, nobody should be getting [AstraZeneca] as a first dose,” said Andrew Morris, an infectious-disease doctor at Toronto’s University Health Network and a member of Ontario’s COVID-19 Science Advisory Table.

Dr. Morris added that a case could be made for offering AstraZeneca in places burning with COVID-19, including most of Alberta, Peel Region and parts of Toronto, but not if an adequate supply of mRNA shots can be sent to hot zones instead.

Lynora Saxinger, an infectious-disease physician at the University of Alberta, said she understands why the Alberta government has opted to pause the booking of first-dose appointments of AstraZeneca.

“A pause is not necessarily a bad thing in my books. I just don’t want to consign it to the dustbin permanently until we know a little bit more,” Dr. Saxinger said.

The AstraZeneca vaccine has some important advantages, she added, including the fact that it is easy to ship and store. Dr. Saxinger also said people who have already taken AstraZeneca should be confident they did the right thing, given the situation at the time, including higher case counts and limited vaccine supply.

With reports from Jeff Gray and Ivan Semeniuk 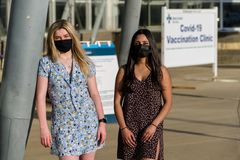 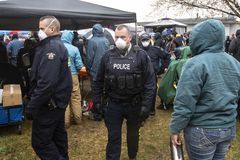 Follow James Keller, Marieke Walsh and Kelly Grant on Twitter @byjameskeller @mariekewalsh @kellygrant1
Report an error Editorial code of conduct
Due to technical reasons, we have temporarily removed commenting from our articles. We hope to have this fixed soon. Thank you for your patience. If you are looking to give feedback on our new site, please send it along to feedback@globeandmail.com. If you want to write a letter to the editor, please forward to letters@globeandmail.com.
Comments