Former interim Conservative Party leader Rona Ambrose’s private member’s bill requiring sexual-assault education for judges is one step closer to becoming law after making its way through a Senate committee with the addition of a few key amendments. Now the bill goes to the full Senate for a vote.

Ms. Ambrose has waited two years for the bill to get to this stage and she was fearful it would die if the House rose before the Senate could vote on it. The House is expected to rise in about three weeks and will not resume until after the fall election.

“From a societal context, sexual violence is described as a silent epidemic by some. The statistics are staggering. One in three women and one in six men will experience sexual violence in their lifetime,” Ms. Ambrose told the Senate committee on legal and constitutional affairs on Monday evening.

“For Indigenous women and girls, the numbers are much worse. They are five times more likely to suffer sexual violence than non-Aboriginal women.”

Ms. Ambrose said 95 per cent of women who are sexually assaulted remain silent and men and boys are even less likely to go public with their experiences. “When asked why, according to Justice Canada research, two thirds of the victims will say they have no faith in the courts.”

She told senators that passing the bill will send an important message to Canadians that Parliament understands the importance of this issue and in building confidence in the country’s institutions. It’s also about federal leadership, she said, including sending a signal that could prompt provinces to bring in their own laws.

"Advocacy and debate around this bill has already resulted in one province, PEI, passing a similar bill.”

The committee also heard from Justice C. Adèle Kent, chief judicial officer with the National Judicial Institute, which offers educational programs for judges, about some of the courses offered. Elaine Craig, an associate law professor at Dalhousie University, told the committee there is a critical need for more and better training in sexual-assault law for legal professionals, saying there’s a “public crisis of faith” in the justice system.

After testimony from the committee’s experts, members debated the clauses of the bill until late into the evening.

Independent Senator André Pratte proposed a few key amendments to the bill that were supported by Ms. Ambrose and the bill’s sponsor in the Senate, Raynell Andreychuk. The first amendment requires judges complete the mandatory training after they are appointed to the bench, rather than before, to ensure the confidentiality of judicial applications.

Mr. Pratte proposed an additional amendment that broadens the requirements of who will be involved in developing the education courses, expanding the bill to include more than victims’ groups. Senators also agreed to scrap a part of the bill that would require the Canadian Judicial Council to publish the number of judges who have heard sexual-assault cases along with the number of judges who have not had sexual-assault training.

Over the past few months Ms. Ambrose has criticized the Senate for holding up her bill, accusing senators of delaying her appearance before committee and showing, “that sexual assault survivors are not a priority.” Ms. Ambrose told The Globe and Mail in April that she was concerned that if her bill doesn’t get time at committee and go to a vote, it never would because Parliament has only a few weeks of sitting left before the House rises for the summer.

But senators on the committee said the reason Ms. Ambrose’s bill was taking some time to be studied at committee is that government bills take precedence over private member’s bills. 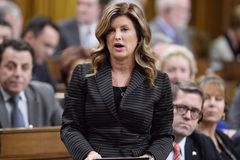