Andrew Scheer laid out his reasoning for why the Conservatives should be allowed to govern if his party wins the most seats but falls short of a majority, saying modern “convention” supports his argument.

Mr. Scheer’s comments were challenged by political-science scholars who said no such convention exists and that constitutional convention in fact grants the incumbent prime minister the first chance of winning the confidence of the House in the event of a minority result.

Questions about how the parties would react if voters elect a minority Parliament on Oct. 21 are being fuelled by poll numbers that show a dead heat among the Liberal and Conservative front-runners. Polls from Nanos Research suggest that no party has enough support to win a majority if an election were held today.

During a campaign stop in Brampton, Ont., Mr. Scheer told reporters, “It is clear that in modern Canadian history, the party with the most seats forms the government and that a prime minister who comes out of an election with fewer seats than another party, resigns." Mr. Scheer was Speaker of the House from 2011 to 2015.

Liberal Leader Justin Trudeau expressed similar views during the 2015 campaign, telling the CBC that “whoever gets the most seats gets the first shot at trying to command the confidence of the House.” However, in the same interview, he also said that the incumbent Prime Minister “absolutely” has the first shot at forming government in a minority Parliament.

In this election campaign, Mr. Trudeau has avoided answering the same questions.

“We are focused on electing a strong Liberal government,” Mr. Trudeau said in response to reporters at a campaign stop in Trois-Rivières.

NDP Leader Jagmeet Singh said he won’t be “bogged down” by the details and that if voters elect New Democrats they will “get fighters, you get people on your side.”

But as the prospect of a minority Parliament with a complex distribution of seats grows, details are exactly what constitutional experts want politicians to be paying attention to. Under Canada’s Constitution, the prime minister and cabinet remain in place until they resign or are dismissed by the governor-general. They don’t get booted on election night just because they didn’t win the plurality of seats in an election that results in a minority.

“The convention is that they get to meet the House and see if they can maintain the confidence. And if they can’t, they have to resign," University of Alberta professor Eric Adams said.

Being able to command the confidence of the House is the critical part of whether a prime minister holds onto power.

Philippe Lagassé, an associate professor at Carleton University, said there is a misconception that the governor-general decides which party leader can seek the confidence of the House first.

“By virtue of his office as prime minister, he decides when Parliament is recalled and he holds that office until he resigns, and he is under no obligation to resign if he believes that he can secure the confidence of the House, and that’s the reason why he is able to stay on,” Prof. Lagassé said.

Prof. Adams said Canada’s institutional memory on constitutional conventions is rusty but added that they exist to ensure good government.

The last time an incumbent prime minister failed to win the most seats in the House of Commons, but retained power, took place in 1925, according to Prof. Adams. Back then, Mackenzie King continued to govern even though the Conservatives had more seats, because King was able to win the confidence of the House with the support of another party.

In 2018, incumbent New Brunswick premier Brian Gallant tried to win the confidence of the House to continue governing even though he had one less seat than the Conservatives. He was defeated in the legislature.

And B.C. is governed by the NDP, though it has one less seat than the Liberals. Green Party legislators agreed to support the NDP on confidence votes for four years in exchange for policy concessions.

Mr. Martin’s resignation gave then-Conservative leader Stephen Harper the chance to seek the confidence of the House in a minority government. Which he successfully did in 2006 and again in 2008.

Over that time, the Conservatives survived confidence votes based on individual arrangements, often with the support of the Bloc or the Liberals.

The challenge for Mr. Scheer in a minority scenario is that his party – and his policy proposals – would not have any natural allies.

On Thursday, for instance, he said that if the Conservatives form government, his first legislative act would be to repeal the carbon tax.

Support for carbon pricing is a core position for all of the other main parties. Bloc Québécois Leader Yves-François Blanchet clearly ruled out supporting a carbon-tax repeal this week.

Thursday’s daily tracking survey from Nanos Research had the Conservatives at 33 per cent support of respondents and the Liberals at 32 per cent. The New Democrats were at 19 per cent, the Greens at 9 per cent, the Bloc Québécois at 6 per cent and the People’s Party at 2 per cent.

The poll was sponsored by The Globe and Mail and CTV, with a total of 1,200 Canadians surveyed on Oct. 13, 15 and 16 (there was no polling on Thanksgiving Monday). It has a margin of error of 2.8 percentage points, 19 times out of 20. Respondents were asked: “If a federal election were held today, could you please rank your top two current local voting preferences?” A report on the results, questions and methodology for this and all surveys can be found at http://tgam.ca/election-polls.

With reports from Janice Dickson in Welland, Ont., and Michelle Zilio in Trois-Rivières. 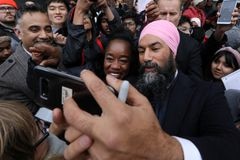 Follow Marieke Walsh, Bill Curry and Kristy Kirkup on Twitter @mariekewalsh @curryb @kkirkup
Report an error Editorial code of conduct
Due to technical reasons, we have temporarily removed commenting from our articles. We hope to have this fixed soon. Thank you for your patience. If you are looking to give feedback on our new site, please send it along to feedback@globeandmail.com. If you want to write a letter to the editor, please forward to letters@globeandmail.com.
Comments