Green Party Leader Annamie Paul is facing a possible non-confidence motion from her party as it debates ousting her less than a year after she took the helm.

Senior party members, including former leader Elizabeth May, blame Ms. Paul for the defection of their only MP outside of British Columbia. Fredericton MP Jenica Atwin left the three-person caucus on Thursday to sit with the Liberals.

The party’s federal council was meeting on Tuesday night to consider whether to start the process to remove Ms. Paul. Earlier on Tuesday, Quebec Green Party Leader Alex Tyrrell called on Ms. Paul to resign rather than go through a lengthy process that could end with the party losing its leader just as an election is called in the fall.

“I can certainly confirm that the federal council is debating non-confidence motions,” Mr. Tyrrell said on Tuesday.

The party confirmed it would hold a special meeting on Tuesday evening, but declined to comment on the agenda.

“There’s a clear debate, and from what I’ve seen so far, the overwhelming consensus of that debate is that she should step back from the leadership as quickly as possible,” Mr. Tyrrell said.

However, former interim leader Jo-Ann Roberts told The Globe and Mail on Tuesday she believes Ms. Paul should be given a chance to stay on.

“This has been a stumble, but I do not think it should be a limiting stumble that does not allow her to go forward,” Ms. Roberts said. She noted that Ms. Paul is still early in her tenure.

Ms. Paul became the first Black leader of a major federal party when the Greens elected her in October with 54 per cent of the vote on the eighth ballot. At the time, her win was heralded as a sign of the party’s growing credibility on the national stage, and a clear threat to the NDP. Ms. Paul did not comment on the potential non-confidence motion, but at a news conference earlier on Tuesday rejected calls to resign, suggesting it would be undemocratic.

“The members are the people that voted for me just over half a year ago and gave me a really strong mandate,” Ms. Paul said. “It’s important for none of us to seek to circumvent the democratic process.”

Ms. Paul also noted that there is an automatic leadership review, meaning “members will be able to pass judgment soon enough.”

Operation Black Vote, a multi-partisan organization that works to increase the numbers of Black people elected to all levels of government, issued a statement on Tuesday questioning the treatment Ms. Paul is enduring.

“The experience that Ms. Paul has had to date is inexcusable, and is unlike the experiences of her federal counterparts or predecessor in the Green Party of Canada,” the statement said.

For Ms. Paul to be removed, three-quarters of the federal council would have to vote non-confidence, and then members would vote at a subsequent general meeting, according to the party’s constitution. The first vote from the council can only take place after 30 days notice.

Ms. Atwin, who has not agreed to an interview request with The Globe and Mail, told CTV she left in large part due to a dispute over the party’s stand on Israel. Ms. Atwin in May called Israel an apartheid state and suggested Ms. Paul’s position was too soft on Israel.

Ms. Paul’s senior adviser, Noah Zatzman, then took to Facebook to accuse unspecified Green MPs of antisemitism and pledged to defeat them. When she joined the Liberals, Ms. Atwin said she would not change her position, but she reversed course on Monday.

Ms. May said on Monday that Ms. Paul should apologize to Ms. Atwin and try to persuade her to cross-back to the Greens.

Ms. Paul rejects the notion that Ms. Atwin left because of the dispute, and says she was talking to the Liberals before the May argument.

Adriane Carr, a Green Party city councilor in Vancouver, said members are upset over the turmoil and said the party could consider putting Ms. May back at the top. ”It’s a good safety net,” she said.

Ms. May declined to comment on Tuesday. Just before Ms. Paul’s election, Ms. May told the Toronto Star she wouldn’t rule out returning as leader.

Nanos Research founder Nik Nanos said the public dispute over Ms. Paul’s leadership is going to damage the Green Party brand as it faces a likely election within months.

Mr. Nanos said on Tuesday the leadership debate will disappoint the one in three Canadians his firm’s polling numbers suggest are open to voting for the Green Party. He said he expects those voters will turn to options such as the Liberals or New Democrats.

“Regardless of the outcome of the [leadership] vote, I would hazard to say damage has been done,” Mr. Nanos said. “The big question is how damaging has this been.” 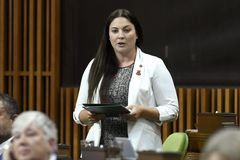