Annamie Paul pledged on Wednesday to stay at the helm of an increasingly divided Green Party, and called the arguments used by members campaigning to have her removed racist and sexist.

Eight months after Ms. Paul’s historic breakthrough as the first Black woman and Jewish woman to lead a major federal party, she was at a news conference in Ottawa fighting for her political life. On Tuesday night, members of the party’s federal council debated a non-confidence motion on her leadership and two members of the council resigned, joining three others who recently quit.

Ms. Paul pushed back against the internal revolt, which she played down as something driven by a small group of “institutional gatekeepers” who are threatened by the changes she is implementing.

“They produced a list of allegations, allegations that were so racist, so sexist that they were immediately disavowed by both of our MPs as offensive and inflammatory and contrary to party ethics,” she said.

She refused to provide details.

After a meeting on Tuesday night, the party’s federal council gave her an ultimatum: repudiate comments from a former staffer who accused Green MPs of anti-Semitism and vowed to defeat them, or face a confidence vote on her leadership. On Wednesday, Ms. Paul declined to comment on the ultimatum, saying she has not formally received it.

The meeting was held to discuss a motion of non-confidence in the leader brought forward by some members of the federal council. In a document, obtained by The Globe and Mail, the councillors say Ms. Paul has acted with an “autocratic attitude of hostility, superiority and rejection” and “displayed anger in long, repetitive, aggressive monologues.”

The document also said donations have declined and council representatives are being inundated by party members concerned about Ms. Paul’s actions or calling for her resignation.

Ms. Paul declined to comment on the letter when asked about it by The Globe.

The party’s inner turmoil erupted into the public sphere last week, when Fredericton MP Jenica Atwin defected to the Liberals. Her exit was a serious blow to a party that has struggled to expand outside B.C. The two remaining MPs blamed Ms. Paul for the floor-crossing because of how she handled a dispute between her former senior aide, Noah Zatzman, and Ms. Atwin.

Neither of the remaining Green MPs, former leader Elizabeth May or Paul Manly, has said whether they still support Ms. Paul, and both have declined requests to comment since the non-confidence motion. On Monday, Ms. May called on the leader to apologize to Ms. Atwin and persuade her to return to the Greens.

In a 5-4 vote, the council passed a motion to ask Ms. Paul and Mr. Manly to organize a joint statement and a news conference at which Ms. Paul would repudiate Mr. Zatzman’s attacks and explicitly support the Green Party caucus. “Otherwise, a vote of non-confidence in the leader will take place on July 20, 2021,” interim federal council president Liana Canton Cusmano said in a statement on Wednesday.

Federal council’s Nova Scotia representative, Lia Renaud, resigned on Tuesday, as did Newfoundland and Labrador representative Lucas Knill. The party did not comment on their exit, but their names were removed from its website.

In a statement to The Globe, Ms. Renaud said on Wednesday, “Annamie Paul’s leadership approach and relationship-building skills were the issue of discussion.”

“Her reaction to the meeting (calling the council ‘racist’ and ‘sexist’) is just another example of the toxic relationship and work conditions,” Ms. Renaud said.

With just months to go before a widely expected fall election, Ms. Paul still faces the prospect of being removed by the party. For that to happen, three-quarters of the federal council would have to vote non-confidence at the July meeting. If that passes, members would vote at a newly scheduled general meeting on Aug. 21.

Former interim leader Jo-Ann Roberts told The Globe on Wednesday she stands by her comments that Ms. Paul should have the chance to stay on. Dimitri Lascaris, the runner-up in last year’s leadership race, said Ms. Paul needs to reach out to party members.

“Annamie has a good bit of work to do to regain the trust of the members, and I hope she can do that,” he said.

Ms. Atwin, who has not agreed to an interview with The Globe, told CTV on Sunday she left the party in large part due to a dispute over its stand on Israel. Ms. Atwin in May called Israel an apartheid state and suggested Ms. Paul was too soft on Israel.

“There are no two sides to this conflict, only human rights abuses. #End Apartheid,” Ms. Atwin wrote on Twitter.

Mr. Zatzman then took to Facebook to accuse unspecified Green MPs of anti-Semitism and pledge to defeat them. He said he would replace them with “progressive climate change champions who are antifa and pro LGBT and pro Indigenous sovereignty and Zionists.”

When she joined the Liberals, Ms. Atwin said she would not change her position, but she reversed course on Monday.

Ms. Paul has rejected the notion that Ms. Atwin left because of the dispute and she repeated that position on Wednesday. She said she does not believe Ms. Atwin, or any Green MP, is an anti-Semite.

“I do not agree with many of the views that have been expressed by our MPs, but they are of course welcome to express them and everyone knows that that is the Green Party, the ethos,” Ms. Paul said. 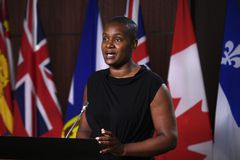