The man who rammed his truck through the gates of Rideau Hall and got near the residences of the Governor-General and the Prime Minister allegedly carried a high-capacity magazine and four loaded firearms – including an M14 rifle – and uttered a threat against Justin Trudeau, according to the RCMP.

In a charge sheet that was made public on Monday, RCMP Corporal Michelle Bergeron alleged that the suspect was in possession of a Norinco M14 rifle, a Hi-Standard Revolver, a Lakefield Mossberg shotgun and a Dominion Arms shotgun on July 2.

The incident raises questions about the security in place to protect the Prime Minister and will put pressure on the federal government to upgrade Rideau Hall and finalize plans to create a permanent residence for prime ministers and their families. Mr. Trudeau has not lived at 24 Sussex Dr. since becoming Prime Minister in 2015 because the official residence needs repairs. His family is housed at Rideau Cottage on the grounds of Rideau Hall and there is no project in place to renovate or replace the official residence.

Corey Hurren, 46, of Manitoba faces a total of 22 charges. A member of the Canadian Armed Forces, Mr. Hurren was considered to be “on duty” on the day of the incident through his work as part of Operation Laser, under which the Canadian military has helped governments cope with the COVID-19 pandemic. However, the CAF said he travelled to Ottawa without informing his superiors.

The Trudeau government prohibited the M14 on May 1, including it on a list of more than 1,500 assault-style firearms that Public Safety Minister Bill Blair referred to as “dangerous firearms designed for the battlefield, not for communities.” Owners of the newly banned rifles can keep them in storage under a two-year amnesty, but cannot fire or transport the guns.

Neither Governor-General Julie Payette nor any member of Mr. Trudeau’s family were present at Rideau Hall at the time of the incident.

Security expert Wesley Wark, a professor emeritus at the University of Toronto, said the government should get moving on renovating or replacing the prime minister’s residence.

He added he is surprised there was not a system in place to alert the RCMP immediately of a breach of the fence at Thomas Gate, which was allegedly rammed by the suspect’s truck. “You’d want a very fast tripwire system from a combination of CCTV and electronic monitoring,” he said. “It seems like a slow timeline of response in terms of this incident.”

RCMP deputy Commissioner Mike Duheme refused to provide any information last week on the motive of the man who allegedly drove his Dodge Ram truck through a fence at Rideau Hall at 6:30 a.m. and made his way to a greenhouse on foot, allegedly carrying at least one weapon.

According to the RCMP, officers started to talk to the suspect around 6:45, and he began to respond at 6:53 by providing his name and other information about himself. The suspect was apprehended around 8:30 on Thursday morning.

The Prime Minister’s Office said it would not comment on the latest developments in the matter. Last week, Mr. Trudeau thanked the police officers who ensured that “nobody was hurt.”

“Obviously, this was something nobody wants to hear,” he said. “But I want to thank the extraordinary members of the police services and the RCMP who did their job.”

According to the charge sheet, the suspect allegedly had the revolver illegally. Under Canadian law, revolvers and all other handguns carry restricted status, for which gun owners require a Restricted Possession and Acquisition Licence.

The document states that the suspect held a valid permit to possess the M14 – a Possession and Acquisition Licence – but not to transport or carry the rifle to the location where he was detained.

Mr. Hurren faces a charge for carrying a prohibited high-capacity magazine. In Canada, rifle magazines are limited to five rounds. While stock M14 magazines can hold 20 rounds, they are capped at five rounds for the Canadian market, often with the insertion of a pin.

The charge sheet offers information on which firearms the suspect is alleged to have been carrying when he was intercepted by police. He is being charged with carrying the loaded M14 and the shotguns “in a careless manner,” but not the revolver.

“That tells you that at some point the M14, the Lakefield and the Dominion Arms were [allegedly] on his person,” said Solomon Friedman, a criminal lawyer and firearms law expert. “And suggests to me the revolver probably didn’t leave the [vehicle].”

Mr. Friedman is counsel on one of several court challenges to the new Liberal ban and says this is likely the first time anyone has been charged under the prohibition.

Used by the U.S. military in the 1950s and 60s, the M14 has since become popular among recreational shooters for its accuracy and low price. The Norinco M14 was sold in Canada for between $400 and $800 until the May 1 ban ceased all sales.

The rifle gained widespread notoriety in Canada when a gunman used variation of it to kill three Moncton RCMP officers in 2014. 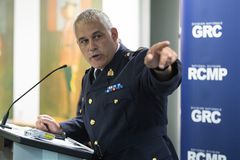 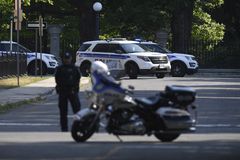 Follow Daniel Leblanc and Patrick White on Twitter @danlebla @Nut_Graf
Report an error Editorial code of conduct
Due to technical reasons, we have temporarily removed commenting from our articles. We hope to have this fixed soon. Thank you for your patience. If you are looking to give feedback on our new site, please send it along to feedback@globeandmail.com. If you want to write a letter to the editor, please forward to letters@globeandmail.com.
Comments are closed