Once he was the touchy-feely king of co-operation and co-operative federalism, but now Justin Trudeau is being sold as a tough guy. Particularly when it comes to dealing with premiers.

The Liberal Party’s new French-language ads feature the Prime Minister looking straight into a camera saying “We stand up – for you” – in NAFTA negotiations, in expanding child benefits, in requiring all provinces to put a price on pollution, or against Conservative austerity, and so on.

The point isn’t so much the examples as the image. It’s about Mr. Trudeau having a backbone.

They’re out to frame Mr. Trudeau as the strong leader, and Conservative Leader Andrew Scheer as the weak one.

That’s particularly true when it comes to dealing with the provinces, especially with Conservative premiers such as Ontario’s Doug Ford and Alberta’s Jason Kenney. The sunny ways of federal-provincial relations in 2015 are giving way to a tougher approach to premiers reminiscent of his father, Pierre.

Two weeks ago, when five right-of-centre provincial premiers wrote to complain that Liberal environmental bills would harm the resource industry, Mr. Trudeau fired back that conservative premiers were threatening national unity “if they don’t get their way.” He suggested Mr. Scheer should condemn that, too.

It was an echo of the days when Pierre Trudeau accused Joe Clark of planning to serve as “headwaiter to the provinces.” The Justin Trudeau who campaigned in 2015 promising to work co-operatively with premiers was – as his father did – pushing back provincial demands as irresponsible and telling everyone he would stand up to them.

One obvious thing that has changed is that there are now more conservative premiers (with various party labels) in provincial capitals. Another is that an election is coming. For the Liberals, those two things fit together.

That’s because one of Mr. Trudeau’s political advantages is that voters do see him as a relatively strong leader. And also because a lot of left-leaning voters seem to believe someone has to stop those conservative premiers they don’t like.

Mr. Trudeau has often been portrayed as a leader with softer empathetic qualities even if some who worked with him described him as insistent on getting his way. Voters see him as sure of himself.

“Strong leadership, confident – those kinds of words [are used] to describe Trudeau. And that’s important,” said pollster Greg Lyle, owner of Innovative Research Group. Even in the weeks after the SNC-Lavalin affair, when his brand took a beating, polls showed he still had the edge on those measures, Mr. Lyle said.

That may also be why Engage Canada, a left-of-centre third-party political-marketing organization, has attacked the Conservatives with ads portraying Mr. Scheer as “weak.” It highlights a comparison that favours Mr. Trudeau.

But there’s another thing at play. Many voters – presumably left-of-centre voters – want the federal government to counter Mr. Ford and Mr. Kenney. Mr. Lyle’s firm asked that question in an internet poll in April, and a solid majority said they want Ottawa to counter their “negative influence.”

No wonder Mr. Trudeau is portraying himself as a leader who stands up. And stands up to premiers. It also explains why Engage Canada’s TV commercials sought to combine the idea that Mr. Scheer is weak with the notion that Mr. Ford is scary; it’s a way of suggesting that Mr. Scheer would let Mr. Ford have his way with the country.

Mr. Lyle noted that the Liberals aren’t targeting seats in Alberta when they talk about Mr. Kenney, and making Mr. Ford into a bogeyman isn’t just a tactic for Ontario. It’s an effort to convince progressive voters that Mr. Trudeau would stand up to perceived trends they don’t like, and Mr. Lyle said that if they can hint that that also includes U.S. President Donald Trump, that would help, too. Those new French-language ads, remember, include Mr. Trudeau boasting about “standing up” in NAFTA talks.

After taking a beating over the SNC-Lavalin affair, the Liberals probably found that their other tacks – such as running ads about the environment – helped change the subject but didn’t win back voters. But saying you will stand up to Mr. Ford and Mr. Kenney might unite a lot of left-leaning voters. No wonder Justin Trudeau’s tone with premiers is starting to echo his father’s. 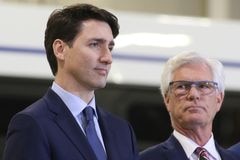 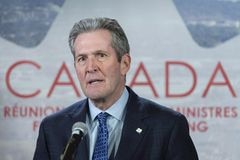 Conservatives call Trudeau a hypocrite over use of plastic forks at lunch meeting Subscriber content
June 25, 2019