Perry Bellegarde is fighting to keep his job as National Chief of the Assembly of First Nations against competitors who challenge his commitment to deliver on the issue of Indigenous sovereignty.

The election, which will take place Wednesday in Vancouver, comes at the end of Mr. Bellegarde’s first term, in which the federal Liberal government promised billions of additional dollars to improve the quality of life for the country’s Indigenous people.

But AFN national chiefs historically have defended themselves against the allegation that they are too cozy with the governing party in Ottawa. And this election is no exception.

Those who would replace Mr. Bellegarde are pointing to the Liberal government’s announcement in February that it will bring in a “new framework” on Indigenous rights. The plan is short on details but will be enacted with legislation that the government says will be introduced in the coming months.

Russell Diabo, a Mohawk policy analyst from Kahnawake, south of Montreal, visited British Columbia last week, where a camp of First Nations people are protesting against the expansion of the Kinder Morgan pipeline. He said the framework is nothing more than an attempt on the part of the government to “extinguish aboriginal title.”

Mr. Bellegarde himself wrote a harsh letter two weeks ago to Carolyn Bennett, the Minister for Crown-Indigenous Relations. He complained that a meeting between the federal government, the provinces and the territories to discuss the proposed framework had been held behind closed doors.

“It is inappropriate in this day and age for federal and/or provincial/territorial governments to discuss our fundamental rights as nations and peoples without us at the table,” he wrote.

But Mr. Bellegarde’s competitors say his record suggests his willingness to confront the government has been tepid.

In an interview with The Globe and Mail last month, Mr. Diabo accused the AFN of signing secret “top-down agreements with the government” that have resulted in the erosion of First Nations sovereignty.

He is one of four people challenging Mr. Bellegarde, a former Saskatchewan regional chief for the AFN and former chief of the federation of Saskatchewan Indian Nations.

The others are Sheila North, Miles Richardson and Katherine Whitecloud. Ms. North is the Grand Chief of Manitoba Keewatinowi Okimakanak, which represents 30 First Nations in Northern Manitoba. Mr. Richardson is a former president of the Council of the Haida Nation in British Columbia and is currently the director of the National Consortium on Indigenous Economic Development. And Ms. Whitecloud is a former Manitoba regional chief of the AFN and a one-time executive director of the Dakota Ojibway Tribal Council.

Each of the chiefs of Canada’s more than 600 First Nations, or their proxies, may cast ballots in the election − though not all will show up.

Although Mr. Bellegarde is the front-runner by virtue of incumbency and going up against multiple contenders, the outcome cannot be predicted with any certainty. If he loses, the federal Liberal government can expect a bumpier ride than it’s had since the 2015 federal election.

“Never should discussion of our treaty rights, our rights and title, happen without us being a full recognized partner in the room,” Mr. Richardson, who has received a number of high-profile First Nations endorsements, told a candidates’ event in Manitoba last week. “And they will never get away with that when I am your national chief.”

Ms. North told the same candidates’ event that she wants to move with people “across this country who are seeking a stronger sovereign voice.”

And Ms. Whitecloud said the First Nations agenda is “being dictated to us and we don’t have a say in how it’s going to proceed.”

Mr. Bellegarde has his supporters among the chiefs, but there are also those who say it’s time for a change.

Pamela Palmater, a First Nations activist and Mi’kmaq lawyer who is the chair of Indigenous governance at Ryerson University in Toronto, said the chiefs have a “core decision” to make in this election about their relationship with Canada.

“It’s really about independence and the right to be self-determining,” she said. “While sovereignty has always been a core issue for us, and asserting our rights and so on and so forth, it doesn’t become a boiling point until there is a direct threat to it on a national scale. This year, that threat is this federal framework which is going to limit the scope of our rights and make them subservient to federal and provincial jurisdiction.” 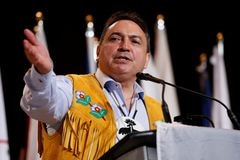