The RCMP will allow bearded officers to return to operational duties, nearly half a year after they were put on desk duty under a policy that mostly affected Sikh and Muslim Mounties.

The national police force changed the policy after Prime Minister Justin Trudeau said last Friday he was very disappointed to learn the RCMP was preventing bearded officers from working on the front lines during the pandemic.

Last week, the World Sikh Organization, which seeks to promote and protect the interests of Canadian Sikhs, noted that Sikh officers had been removed from front-line policing duties and were given desk roles for nearly six months because the RCMP said its personal protective equipment (PPE) does not seal over facial hair.

The organization also said the RCMP was the only police force in Canada that refused to accommodate bearded Sikh officers, while the force said it was subject to a health and safety regulation for respirator mask fitting that “specifically requires a clean shave.”

Gail Johnson, the RCMP’s chief human-resources officer, said Thursday the RCMP heard from officers, including Sikh and Muslim members, regarding the lack of safe facial PPE for members with beards.

She said that across Canada the officers may now return to operational duties wearing existing and appropriate PPE assigned to them, based on a risk assessment carried out by commanding officers in their respective provinces.

“Calls for service will be triaged from call centres, with bearded members being assigned to respond operationally only if the risk of exposure is low or multiple responding officers will be present,” she said in a statement. “At no time will we accept putting our officers or the public at any undue risk.”

WSO president Tejinder Singh Sidhu said Thursday his organization is pleased bearded Sikh RCMP officers will be able to return to operational duties, just like Sikh officers in every other police force across Canada.

“The affected Sikh RCMP officers were feeling disheartened that this situation had dragged out for six months and this will be a relief to them,” he said in a statement. “We are hopeful that this incident will create momentum to find more permanent PPE solutions for bearded front-line workers so that they can continue to contribute in their respective positions."

Mr. Sidhu added he is glad the RCMP has now taken steps to resolve this issue, but said he is disappointed this needed to become a public issue.

“'This points to a much deeper systemic discrimination issue that the RCMP needs to address as a matter of priority," he said.

This summer, RCMP Commissioner Brenda Lucki faced questions over her own understanding of systemic racism in her force.

On June 10, Ms. Lucki said in an interview with The Globe and Mail that “we don’t have systemic racism” in the force. Mr. Trudeau contradicted her the next day, and on June 12 she released a statement acknowledging the issue in the RCMP.

“During some recent interviews, I shared that I struggled with the definition of systemic racism, while trying to highlight the great work done by the overwhelming majority of our employees,” she said in the June 12 statement. “I did acknowledge that we, like others, have racism in our organization, but I did not say definitively that systemic racism exists in the RCMP. I should have.”

The national police force and other forces across the country have also faced increased public scrutiny in recent months because of a spate of police shootings in Canada and the United States.

For its part, the Liberal government has promised to address systemic racism and to move forward on reconciliation with Indigenous peoples, including a pledge to reform the RCMP and to modernize training for police and law enforcement.

The RCMP’s Ms. Johnson said Thursday that PPE and the effects on RCMP members with facial hair during the pandemic have been publicly debated the past few days.

“I share the frustrations of our police officers across Canada who are personally affected,” she wrote.

“While these dedicated and valued members have been accommodated for medical or religious reasons in response to the COVID-19 pandemic, over the last few months they have not been able to serve Canadians on the front lines as we worked to find equipment and operational solutions.”

She said the force is examining masks that would meet Canada Labour Code standards, adding it has also started to work with Innovations Solutions Canada, a government innovation funding program, to explore the research and development of “inclusively designed PPE” and to ensure regulatory requirements “support safe and non-discriminatory practices across Canada.”

Public Safety Minister Bill Blair said Thursday that the RCMP will ensure that Sikh and Muslim officers can do their jobs safely, while “respecting and accommodating their faith.”

“We thank them for their service,” he wrote on Twitter.

Diversity in policing makes it more effective, he added.

“We must always be vigilant against systemic discrimination.”

Trudeau says he is disappointed in RCMP’s treatment of Sikh officers over mask issue
September 25, 2020 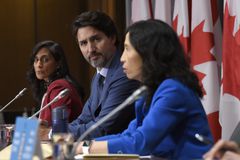