Maxime Bernier is using Andrew Scheer’s own words like they’re an embarrassing confession. The Conservative Leader told the Toronto Sun this week that his party is “pragmatist” and “centrist.” Mr. Bernier tweeted it out as though Mr. Scheer had just admitted that he’s a charlatan.

“Contrary to Mr. Scheer’s pragmatism, I apply principles,” Mr. Bernier said in an interview. The Beauce MP and founder of the fledgling People’s Party of Canada is about to start holding rallies to try to persuade small-c conservatives that Mr. Scheer is a pandering, poll-watching, slightly less-liberal politician. And that he, Mr. Bernier, is the real McCoy.

It’s a potential threat to Mr. Scheer that is bigger than the 1-per-cent support that Mr. Bernier’s party now has in opinion polls. He is taking aim at one of the Conservatives’ great assets, their solid political base. It’s not just about votes. Every time Mr. Scheer moves to the centre, Mr. Bernier will be chipping at his image as a leader.

Mr. Bernier’s new party has just made riding executives sign a form pledging that they won’t do anything to embarrass the party – but he is heading to a weekend event organized by a website that Mr. Scheer now won’t touch with a 10-foot pole, the Rebel.

Mr. Scheer, once a repeat guest, declared last year that he wouldn’t appear on the right-wing site that plays host to anti-Muslim and anti-immigrant messages, after then-Rebel host Faith Goldy followed sympathetic coverage of white-nationalist protests in Charlottesville, Va., with an appearance on virulently anti-Semitic site The Daily Stormer.

But Mr. Bernier’s face is on ads for Saturday’s “Rebel Live” $75-a-head event in Calgary. The site’s founder, Ezra Levant, said in a video that he invited Mr. Scheer, but didn’t hear back. Mr. Bernier is going.

He scoffs at the notion that he’d stay away. “Why would I deny myself the opportunity?” He’ll talk to small websites, bloggers, The Globe and Mail, the National Post, he said, even small left-wing sites.

The question isn’t really about openness to media, though. It’s whether he’s signalling to people who are anti-immigrant to build support. He told a blogger that his party is against “mass immigration.” His tweets about cultural diversity in August, the ones that set him at loggerheads with Mr. Scheer, included claims that more diversity will lead to “distrust, social conflict, and potentially violence,” and were seen by many as dog whistles. Mr. Levant told his viewers that Mr. Bernier’s meaning was obviously linked to migrants and Muslims.

“It’s not hard to guess. I mean, open the newspapers on any given day. Open borders, fake refugees. Muslim terrorist attacks. The burka and niqab becoming ubiquitous,” Mr. Levant said in a video. Mr. Bernier, always smiling, disagreed: “That’s his interpretation,” he said.

Mr. Bernier insists that his new party is not anti-immigration, but just wants to lower the numbers, from a projected 350,000 in 2021 to 250,000. That’s to allow for better integration, he said. Canada has been successful with immigration so far − “We do not have an integration problem” – but should not become a country such as France, where, he said, many immigrants are not well-integrated.

Will his rhetoric attract anti-immigrant supporters? “There is a risk of that,” Mr. Bernier acknowledges. Hence the no-embarrassment pledges for riding executives, and possible background inquiries. “If they are anti-immigrant, they can go and form their own party,” he said.

It will obviously be a struggle for Mr. Bernier to appeal to the people who embarrassed his old party without embarrassing the new one. But Mr. Scheer’s Conservatives can’t discount the threat entirely.

He has already recruited 31,900 members, formed 112 riding executives, and raised $437,000. When the Reform Party began, its supporters organized slowly in church basements, Mr. Bernier said, but there was no social media then.

The main pitch that Mr. Bernier makes is that he’s not out to pander to special interests, whether it’s dairy farmers, or companies seeking corporate welfare, or ethnic minorities. He’s no Donald Trump, but it’s a similar populist pitch that he’s not beholden to interests. There’s a wave for politicians who say what they think, rather than dodging, he said: “People know the difference.”

That’s not yet enough to even cause a blip in polls. But he’s still a threat to the Conservative Leader. When Mr. Scheer plays to the middle, Mr. Bernier will be talking to his base. 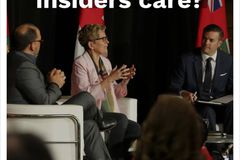 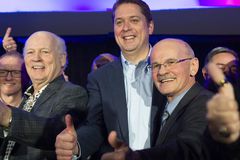 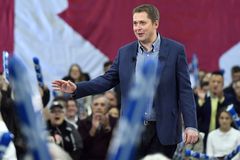