Conservative MP Maxime Bernier says he is postponing the publication of his book “indefinitely” to preserve party unity after excerpts accused Andrew Scheer of winning the party leadership with the help of “fake Conservatives.”

The move came as Mr. Bernier, the runner-up in last year’s leadership race, faced his own caucus on Wednesday. Many MPs had expressed anger and frustration that the Quebec MP had undermined Mr. Scheer’s stewardship of the party when his publisher released an advance chapter of the book to The Globe and Mail last week.

In a series of tweets on Wednesday, Mr. Bernier said the book wasn’t intended to be about his leadership campaign, but that whatever he wrote “will always be interpreted as me creating division and challenging our leader.”

“This book and the ideas it contains are very important to me. But now is not the right time to publish it. After consideration, for the sake of maintaining harmony within our party, I have decided to postpone its publication indefinitely,” Mr. Bernier wrote.

“I only have one priority: to defeat Justin Trudeau’s government, and replace it with a majority Conservative government, with Andrew Scheer as prime minister, in 2019.”

The book, Doing Politics Differently: My Vision for Canada, was scheduled for release in November.

Mr. Bernier, who currently serves as the party’s innovation critic, lost by a razor-thin margin to Mr. Scheer in last May’s contest. A key plank in Mr. Bernier’s leadership bid was to scrap Canada’s supply-management system, which Mr. Scheer supports.

Mr. Scheer’s office declined to comment on Wednesday, including on whether Mr. Bernier faced consequences, such as removal from caucus or his critic role, if he published his book. Mr. Bernier did not respond to interview requests.

The 27-page chapter chronicled Mr. Bernier’s fervent opposition to supply management, the system that regulates prices on dairy, eggs and poultry in Canada.

In it, Mr. Bernier said the dairy lobby worked to oppose him in the leadership race, claiming the number of Conservative members in Quebec rose to more than 16,000 from 6,000, but has since dwindled back down to 6,000.

“Andrew, along with several other candidates, was then busy touring Quebec’s agricultural belt, including my own riding of Beauce, to pick up support from these fake Conservatives, only interested in blocking my candidacy and protecting their privileges,” Mr. Bernier wrote.

Mr. Bernier said he has no legitimacy to question Mr. Scheer as leader. “But I will never again say the opposite of what I believe in and pretend this is a good system just for the sake of party unity,” he wrote.

“Everyone grumbles after a leadership, Look, it was frustrating for me to lose. But Andrew’s been doing a spectacular job, and I think Max sees that first-hand.”

“Will he continue to have his own personal opinions? Yes. But when he speaks on behalf of the Conservative Party I would expect him to fall into line,” she said. 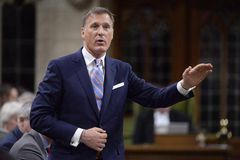