NDP Leader Jagmeet Singh is on his way to the House of Commons, Justin Trudeau’s Liberals are poised to make further gains in Quebec and Andrew Scheer’s Conservatives need to keep an eye on Maxime Bernier’s splinter movement, after by-elections Monday that took the political temperature in the country’s three largest provinces.

Mr. Singh won the British Columbia riding of Burnaby South with 39 per cent of the vote. Only a few months ago there were rumours that the NDP was trailing the Liberals in the riding; had he lost, Mr. Singh would have become the answer to an embarrassing trivia question.

But things ultimately went his way. The first nominated Liberal candidate, Karen Wang, was forced to withdraw, after predicting Chinese-Canadian voters would prefer her over a candidate of “Indian origin.” And the furor surrounding the resignation of Jody Wilson-Raybould from Mr. Trudeau’s cabinet dissipated whatever wisps of wind remained in Liberal sails.

The Grits took 26 per cent of the vote, Monday, well down from the 34 per cent they garnered in the 2015 election. How much did Ms. Wilson-Raybould’s resignation, and that of principal secretary Gerald Butts, push down the vote? That is a very large question.

The results in Burnaby South were worrying for the Conservatives, as well. At 23 per cent, they were down 4 percentage points from 2015, and the People’s Party, a new populist right-wing party led by the disaffected Tory Mr. Bernier, came in at 11 per cent. Had even some of the People’s Party vote gone to the Conservatives, they would have been in a strong second place, instead of trailing the Liberals.

But the Tories could feel much more reassured by the results in York-Simcoe. The riding, which sits on the northern edge of Greater Toronto, has been reliably Conservative since 2004, and Monday was another solid win.

Singh promises a ‘unique vision’ in plan for Quebec

Conservative Scot Davidson held the vote at 54 per cent, while the Liberal vote slumped from 38 per cent in 2015 to 29 per cent Monday night. Even more encouraging for Mr. Scheer, the People’s Party sat at only 2 per cent, suggesting Mr. Bernier won’t be a factor in the fight for the 905, the large belt of suburban ridings surrounding the city of Toronto, named after its area code. The 905 almost always votes for the party that forms the government.

But there was also good news for the Liberals on Monday night – very good news indeed. The Montreal riding of Outremont had been a Liberal bastion before Thomas Mulcair snatched it away in a 2007 by-election for the New Democrats, foreshadowing the rise of the NDP and the collapse of the Liberals in Quebec.

But the Liberals surged back in Quebec in 2015, and their convincing victory in Outremont on Monday – they had 40 per cent of the vote – means not one of the NDP’s remaining 14 seats in the provinces is safe.

Did allegations of political interference by Mr. Trudeau and his advisers in the prosecution of SNC-Lavalin help the Liberal cause in Quebec, where many jobs could be lost if the company suffered, and hurt it in English Canada? Expect a lot of entirely speculative punditry on this in the days ahead.

The Greens polled at 13 per cent in Outremont, half the NDP’s 26 per cent. Make of that what you will.

For the NDP, the news is both bitter and sweet. Sweet: Mr. Singh will finally be in the House of Commons. He will arrive with Justin Trudeau’s government staggering over the SNC-Lavalin affair, giving him a perfect opportunity to reboot his troubled leadership, only eight months before the next election.

Bitter: The New Democrats are no longer in the game in Quebec. The NDP appears destined to become again what it was before: a rump, a third place-place party in English Canada, and soon to be only a memory in Quebec.

Under Jack Layton and Tom Mulcair, New Democrats had hoped for so much more. Monday night’s results suggest that hope is lost. But at least they have a chance to save the furniture. 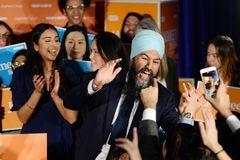