David Lepofsky was not able to mark his choice independently on the mail-in ballot Elections Canada sent to him because he is blind.

He opted to not vote in person with his wife because she has a serious immune limitation and they don’t want to risk being infected with COVID-19.

Mr. Lepofsky, who is a lawyer advocating for accessibility for disabled people, said the voting options available for blind people don’t allow them to cast their ballots privately.

He said the lack of accessible voting options is a violation of section 15 of the Canadian Charter of Rights and Freedoms, which requires equal protection and benefit of the law to those living with mental or physical disabilities.

“This is just awful,” he said in an interview with The Canadian Press.

“The basic right we’re all supposed to enjoy is the right to mark our own ballot in private and to mark it independently, or ourselves, and to be able to verify this mark the way we want. And I currently don’t have that as a blind person at the federal level.”

Elections Canada responded to his complaint on Twitter on Sunday saying the agency recognizes “the special ballot process is not ideal for an elector who is unable to mark their ballot independently.”

Lepofsky said describing the situation as being “not ideal” is an “offensive understatement” because the mail-in ballots are not accessible.

He said the other option of voting in-person at a polling station also would not allow him to vote in private because an Elections Canada officer would have to read and verify his voting choice.

An Elections Canada spokesperson said those who provide assistance to voters must take oaths to protect the secrecy of those ballots.

“In the case of a poll worker, oaths are taken as part of the job when they provide assistance to an elector,” Matthew McKenna said in a statement.

According to Statistics Canada, about three per cent of Canadians aged 15 years and older, or about 750,000 people, have a seeing disability that limits their daily activities and 5.8 per cent of this group are legally blind.

Lepofsky, who is the chair of the Accessibility for Ontarians with Disabilities Act Alliance, said his group sent a letter last month to all main federal parties asking for 12 commitments on accessibility, including one on accessibility of the electoral process.

“Only one leader has answered us. And that is (NDP Leader) Jagmeet Singh,” he said.

“We don’t support anyone or oppose anyone. We try to get the strongest commitments we can, but we have not even gotten an answer from (Liberal Leader) Justin Trudeau or (Conservative Leader) Erin O’Toole.”

He said there should be voting options at the federal level for people with disabilities that allow them to vote without needing help from anyone. He said voting by phone through an automated system can be a good option.

“In New Zealand, they have a phone-in ballot which is not internet-connected. That’s available for voters with vision loss. There are different options around the world but we are lagging way behind,” he said.

Last year, Elections BC provided a telephone voting option for voters who are unable to vote independently, including people who have vision loss, those who have a disability or an underlying health condition that prevents them from voting independently and those who were self-isolating during the last week of the campaign and unable to vote by mail.

“Changes to the way Canadians vote, including telephone voting, would in almost all cases require authorization from Parliament, typically in the form of legislative change,” he said.

“When assessing new voting processes or services, we undertake significant planning and testing to ensure that the new option is accessible, and that the confidentiality, secrecy, reliability and integrity of the vote are preserved.” 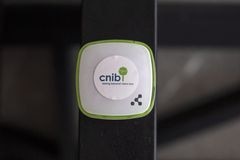