Four Quebeckers who are running for the Bloc Québécois have made comments or shared articles on social media that attacked Islam or were supportive of far-right groups, based on a review of Twitter and Facebook pages.

The comments from the candidates are garnering scrutiny as the Bloc is widely seen as having momentum in the key electoral battleground of Quebec with less than two weeks to go before election day on Oct. 21.

In a statement, a Bloc spokeswoman said the party is leaving it up to “voters to judge” the candidates’ comments on social-media in recent years.

In a Facebook post in 2016, Bloc candidate Lizabel Nitoi posted a link to a blog that claimed that Muslims have a lower IQ and a damaged genetic pool because of “1,400 years of inbreeding.”

Ms. Nitoi, who is running in the riding of Marc-Aurèle-Fortin in Laval, said in an interview the post “does not reflect her values” and she does not remember linking to it on her Facebook page.

A Romanian immigrant, Ms. Nitoi added she is an “ardent defender of the integration of immigrants.”

Earlier this year, she posted a link to a story in Le Figaro that said France has suffered from a “failed integration” of Muslim immigrants.

Another Bloc candidate, Valérie Simard, said that “only Islam officially kill because you are gays” during an exchange in English on Twitter in 2017. She frequently writes about the religion on the social-media site, where she is highly critical of “political Islam” and “radical Islam.”

Ms. Simard, who is running in Chicoutimi-Le Fjord, did not respond to a request for comment.

Back in 2013, Caroline Desbiens wrote on her Facebook page that the Charter of Quebec Values that was being proposed by the Parti Québécois government of the day should be supported even if it was not perfect. “Our daughters, grand-daughters and great-grand-daughters could have to wear a veil to go to the IGA for fear of going to prison in a few years,” said Ms. Desbiens, who is running in Beauport-Côte-de-Beaupré-Île d’Orléans-Charlevoix.

Ms. Desbiens did not respond to a request for comment. In 2016, she praised far-right French politician Marine Le Pen for having the courage of her convictions on Facebook. “Whether one agrees or not or only partially with what Ms. Le Pen says, we need more people like her,” Ms. Desbiens said.

Earlier this week, Bloc candidate Nicole Morin came under fire for providing a link on her Facebook page in 2017 to a video that promoted La Meute, which is a self-styled anti-Islamist and anti-multiculturalism group. The candidate in Saint-Maurice-Champlain told the TVA television network that she did not intend to support the group by linking to the video.

Ms. Nitoi said that questions about past social-media posts were part of a “smear campaign.”

Mr. Blanchet is promising that the Bloc would be the only party in the House to support the positions adopted by the nationalist government of François Legault in Quebec City on issues such as immigration and the defence of Quebec’s law (known as Bill 21) that prohibits some provincial employees from wearing religious symbols at work.

Conservative candidate Alain Rayes, who is the party’s Quebec lieutenant, said the Bloc won’t be able to deliver on its promises as an opposition party.

“How could Bloc MPs prevent a government under Justin Trudeau from challenging Bill 21 in court? They would not have the power to do that,” Mr. Rayes said. “There is only one option to prevent a challenge and that is to vote Conservative.”

NDP candidate Alexandre Boulerice said his party will direct more attacks at the Bloc between now and election day on Oct. 21.

“We succeeded in the first part of the campaign in highlighting the contradictions in the Liberal platform, including their support for the TMX pipeline, but now we have to diversify and give a bit more attention to the Bloc,” said Mr. Boulerice, who is the deputy leader of the NDP. 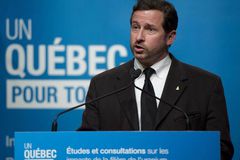 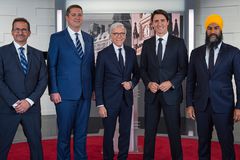