You rarely see politicians making so much effort to pump up an adversary’s coming announcement.

But it’s happening with this week’s big events concerning energy, pipelines and climate change because those issues are at the centre of a political culture war.

Alberta’s United Conservative Premier, Jason Kenney, has taken out full-page ads across the country to highlight that Prime Minister Justin Trudeau has a Tuesday deadline to make a decision on the Trans Mountain pipeline expansion. And the Liberal government has been talking so much about the climate plan that Conservative Andrew Scheer plans to unveil Wednesday that you’d think they’re getting a cut of ticket sales.

But what’s really happening is that both major contenders are making moves to shore up weaknesses to get things done in the last week Parliament is scheduled to sit before a fall election. Voters now see energy-and-environment issues as part of a leader’s identity.

Despite those Alberta ads, it’s not hard to guess what Mr. Trudeau will do: He’s going to approve TMX again.

He approved it once before, in late 2016, and made it a part of a kind of grand political bargain: He’d push forward an oil pipeline to the ocean at the same time as climate action with carbon taxes. He argued one could not go forward without the other. When that was threatened, his government shelled out $4.5-billion to buy the project. And when it was halted by the courts, he made it clear the plan was still going ahead.

The Yes answer still isn’t going to do Mr. Trudeau any political good in Alberta, where anger is high and the PM’s name is mud. More than a few Albertans somehow suspect that the Liberal purchase of Trans-Mountain was a trick that is actually aimed at killing the expansion, even if there’s no political gain to be had from pouring out money on a white elephant.

No, Mr. Trudeau has a lot riding on TMX because a failure to move forward is his failure, and it would crash all his grand rhetoric about the economy and the environment going hand in hand. Most voters want both. Mr. Trudeau told them they can have that.

Mr. Scheer also has to get something done: a climate plan. It’s not going to be a vote-winner, either, so much as a defence.

He is running full-bore against the Liberals’ carbon tax-and-rebate program, opposing Bill C-68, and insisting he would get an oil pipeline to the East Coast built – as well as indicating he’d support more pipelines, too. But he will seek to reassure potential swing voters that he has some concern for climate change, too. He doesn’t need it to be an ambitious plan – voters who desperately want that probably aren’t voting for him, anyway – but he needs a plan.

One problem is that almost any real climate plan will require him to swallow past statements. The big question is whether it will actually be a plan for reducing greenhouse gas emissions.

He not only slammed carbon taxes, he has also complained that the type of carbon tax Ottawa imposes on big industrial emitters – called output-based pricing because it taxes only a small portion of emissions – is an unfair break for the Liberals’ rich corporate friends. The problem is that Alberta’s Mr. Kenney and Ontario’s Doug Ford proposed a form of output-based pricing, too.

What else can Mr. Scheer suggest? Ontario differs with Alberta and Saskatchewan over who should bear the burden for emissions reductions, but Mr. Scheer has complained Ottawa is imposing its policies on provinces. How will he craft a national plan?

Politically, it doesn’t have to meet Canada’s targets under the Paris accord; Mr. Scheer can note the Liberals’ plan does not yet get all the way there, either. The question is whether it will actually be a plan about reducing emissions.

The Conservative Leader has suggested he likes the idea of earning credit for natural gas exports. He has also said Canada should get credit for producing aluminum with fewer emissions than Chinese aluminum. So far, he hasn’t talked about reducing emissions but argued some should not be counted.

Still, to do the political job, Mr. Scheer’s plan will need something that says action – perhaps incentives for clean technology, or home refits, or vehicle regulation. The point is to say he’s got a plan. And like Mr. Trudeau’s TMX decision, it’s a defensive shield he needs in place before he can campaign. 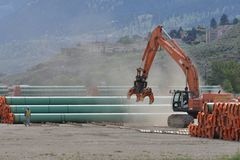 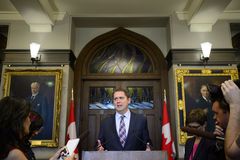 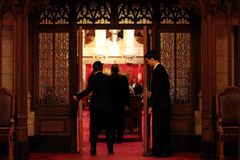