The 2019 election is shaping up to be a referendum on Justin Trudeau’s leadership, which is odd.

After only a few years in power, the Prime Minister should not be such a polarizing figure that this fall’s vote is All About Him. Stephen Harper successfully skated through three elections before he was faced with a referendum on his leadership in 2015, which he lost.

Jean Chrétien never had to fight an election on his leadership – it was always about the other guys. Brian Mulroney got out of the game rather than confront a referendum election.

But the Liberal Party has become so synonymous with Brand Trudeau that deciding whether the Prime Minister deserves four more years will be the inevitable question on Oct. 21.

Opposition leaders have had no success trying to define Mr. Trudeau in their terms, said Lori Turnbull, a political scientist at Dalhousie University, because “he already has his own brand. He was branded the day he was born.” But “that doesn’t mean the brand will keep selling, if people are associating it with things they don’t like.”

So, voters will cast a ballot based on whether they support or oppose the federal carbon tax, even as they choose to renew or reject Mr. Trudeau as prime minister, because your view on the one dictates your view on the other.

People often forget that the Liberal Party of Canada was an empty shell when Mr. Trudeau won the leadership in 2013 – out of money, out of energy, out of ideas. He re-energized the party, but he also consumed it.

Something like this happened in 1968, when Pierre Trudeau won Liberal leadership and instantly called an election. Trudeau-mania swept the party to a majority government, subordinating party to leader in a way the Liberals had never experienced before.

But by 1972, inflation was high, economic confidence was low, the government’s focus on bilingualism was unpopular. “The Land is Strong,” the Liberal slogan, may have been the worst in history, making the Prime Minister look insufferably arrogant. In that referendum election, former Progressive Conservative leader Robert Stanfield, despite being seen as dull and colourless, came within two seats of forming government.

Similarly, Justin Trudeau’s brand in the chill winter of 2019 is not what it was in the sunny autumn of 2015. The stumbles in India and in relations with China. An uncontrolled flow of refugee claimants crossing the border. Pipelines. The carbon tax. Deficits. The failure at electoral reform.

“He has major weaknesses,” said Shannon Sampert, a political scientist at the University of Winnipeg. “But at the same time, there is no alternative for a lot of Canadians … particularly if you are progressive or on the left.”

Jagmeet Singh has failed thus far to make much of a positive impression as NDP Leader. Conservative Leader Andrew Scheer is close to Mr. Trudeau in the polls, but fares poorly in any charisma comparison.

While critics will point to failures, the Liberals also have successes to tout: trade deals with European, Pacific and North American countries, infrastructure investments and child-care supports, assisted-dying legislation and the legalization of marijuana.

But first and foremost, voters will be asking themselves: Am I okay with four more years of Justin Trudeau as PM?

The Brand Trudeau question is part of a trend of personality trumping policy in election campaigns.

“We have lots of studies that show voters evaluate leaders’ personality traits” and that these evaluations powerfully affect their voting choice, said Emmanuelle Richez, who teaches political science at the University of Windsor. “It’s not only about partisanship and socio-demographic background or political issues,” she said. “Leadership does matter.”

Leadership may work in Mr. Trudeau’s favour. Contrasting him with Mr. Scheer and Mr. Singh, voters may decide to go with the leader they know. Prof. Sampert, who researches gender issues in politics, believes progressives may also cast a vote for the collective Liberal leadership, which includes such strong female cabinet ministers as Foreign Affairs Minister Chrystia Freeland and Veterans Affairs Minister Jody Wilson-Raybould.

But the election of 2019 will mostly be a referendum. Once voters have said yes or no to Brand Trudeau, we’ll see where the other chips fall.

Some provinces not co-operating to get infrastructure projects off the ground: Trudeau
January 28, 2019 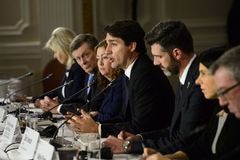 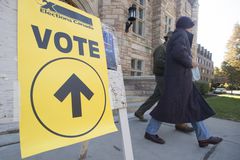