Parliamentary Budget Officer Yves Giroux says the evidence does not support calls from business groups who want Ottawa to cut corporate taxes in order to stay competitive with the United States.

In an interview with The Globe and Mail, Mr. Giroux said that while those groups are acting in the best interests of their members, this year’s data on foreign direct investment in Canada do not back up warnings of an urgent tax-competitiveness problem.

“It doesn’t support these claims to the extent these lobby groups pretend it does. Of course, they’re speaking for their own parish when they’re saying that businesses will suffer from the higher tax rates. Everybody would like to have lower taxes apply to themselves. So, they’re doing their job,” he said. “But evidence does not support the fact that a relatively small difference in tax rates will be catastrophic for the investment climate in the country. It will have a negative impact, but not a significantly negative material impact.”

Mr. Giroux made the comments Tuesday after his office released a fall economic and fiscal outlook that updates its projections for federal revenues and expenses and provides an overview of expectations for the Canadian economy. One section of the report focuses on the impacts of recent corporate and personal tax cuts adopted earlier this year in the United States. The tax cuts will have the effect of reducing the U.S. marginal effective tax rate on new investment to slightly below Canadian rates over 2018 to 2022, but some of those tax breaks are scheduled to be phased out after 2022.

The PBO report notes that over the first half of this year, global foreign direct investment totaled $26.8-billion, which it said is broadly in line with flows over the past five years.

“We assume that the U.S. Tax Cuts and Jobs Act will not have a material impact on Canada’s investment climate,” the report states.

That statement is at odds with the recommendations of the Senate banking committee. It released a report this month – at a joint news conference with Canadian Chamber of Commerce president Perrin Beatty – that said “immediate” cuts to business taxes are required to address competitiveness concerns created by the U.S. changes.

The PBO’s fall economic and fiscal outlook comes ahead of Finance Minister Bill Morneau’s fall fiscal update, which has not been scheduled. That update is expected to outline how Ottawa will respond to the U.S. tax cuts. The minister’s comments to date have hinted at an openness to increase tax incentives for business investment in new equipment, but a reduction in the federal corporate tax rate appears unlikely.

Mr. Giroux’s appointment as Parliament’s latest spending watchdog took effect in September. He is a career public servant who held senior positions in the federal Finance Department and the Privy Council Office before joining the Canada Revenue Agency, where he was an assistant commissioner.

While Mr. Giroux said the U.S. tax cuts will not cause a significant deterioration in foreign investment in Canada, Tuesday’s PBO report said they will have an impact on Canadian federal tax revenue.

The report estimates that federal corporate-income tax revenues will be $500-million a year lower on average as multinational corporations shift some of their profits from Canada to the United States. The PBO says the federal deficit is on track to reach $21.3-billion this fiscal year – up from $19-billion the previous year – before declining to $11.2-billion by 2022-23.

The U.S. equivalent of the PBO – the Congressional Budget Office – has warned American lawmakers about the consequences of the rising federal debt, should they decide to make the recent short-term tax cuts permanent. The U.S. Treasury Department announced this month that the deficit for the year that ended Sept. 30, was US$779-billion, up 17 per cent from the previous year. The deficit figure was seized on by critics of the U.S. tax cuts.

U.S. President Donald Trump said this week that he is preparing to announce another “major tax cut” ahead of the Nov. 6 midterm elections but he has yet to provide any details. 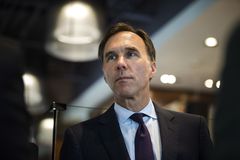