Ottawa has abandoned its campaign to back Michaëlle Jean’s bid for a second mandate as the secretary-general of the Francophonie.

Liberal officials said the government decided to stop supporting Ms. Jean’s re-election rather than risk alienating its allies in Europe and Africa, who were united behind the candidacy of Rwanda’s Foreign Affairs Minister Louise Mushikiwabo.

The summit of the Organisation internationale de la francophonie (OIF), where the new secretary-general will be selected, begins in the Armenian capital of Yerevan on Thursday.

The abrupt shift came after Canadian officials already in Armenia, including Francophonie Minister Mélanie Joly, recognized Ms. Jean had no chance of winning against Ms. Mushikiwabo, said the Liberal officials who were not authorized to speak publicly.

The final decision was made by Prime Minister Justin Trudeau and announced hours before he flew off late on Tuesday for the start of the summit. Liberal officials had reiterated Canada’s support for Ms. Jean’s candidacy as recently as Monday.

Opinion: Canada defends Michaëlle Jean at its own peril

Opinion: Why I want to continue leading la Francophonie

Quebec premier-designate François Legault, who will also attend the summit, agreed with the Canadian position, stating “the time has come for a different management style” at the OIF. Mr. Legault had earlier expressed his reservations about Ms. Jean’s candidacy.

A spokesman for Ms. Jean at the OIF, Bertin Leblanc, said the choice of the next secretary-general will be made at the summit after a debate behind closed doors among all assembled leaders.

Canada’s governor-general from 2005 to 2010, Ms. Jean has come under fire over the financial management of the OIF. The negative coverage, particularly in the Quebec media, included questions over the renovations of her official residence in Paris, as well as allegations of lack of transparency.

The OIF, which is made up of 57 countries, is the French-speaking equivalent of the Commonwealth.

Jocelyn Coulon, an expert on foreign relations at the University of Montreal’s Centre for International Research and Studies, said Ottawa made a strategic decision to focus on securing the support of African countries for its bid to win a seat on the UN Security Council in 2020.

“This was humiliating for the government,” said Mr. Coulon, who was an adviser to former foreign affairs minister Stéphane Dion. "I think that Canada, the Prime Minister’s Office and the Minister of Foreign Affairs should now focus on their medium- and long-term objectives [such as the security council seat].”

In February, the federal government had announced its support for the re-election campaign of Ms. Jean, who started leading the Francophonie in 2014.

In recent months, Mr. Trudeau offered his “strong support” for her bid in separate discussions with his counterparts from Benin, Cameroon, Ivory Coast, Madagascar, Niger, Rwanda and Senegal.

Still, faced with questions over the financial management of the OIF, Ms. Jean struggled to win support for her re-election beyond Canada and Haiti, where she was born 61 years ago. With the backing of France and the African Union, Ms. Mushikiwabo was heading to a near-certain victory. Canada’s reversal now makes her selection inevitable.

Liberal officials said it was becoming obvious in recent weeks that Ms. Jean had failed to garner necessary levels of support among the members of the OIF heading into the summit. Still, Ms. Jean repeatedly refused to bow out of the race, which forced the Canadian government to change its approach on Tuesday.

In an interview with Agence France-Presse in August, Ms. Mushikiwabo said she wanted the OIF to play a more important role on the world stage. She also said she would not criticize authoritarian regimes while she served as secretary-general.

“I don’t believe in giving lessons. I believe in a system in which we accompany, listen, ask questions, offer advice. That is how I see our mission in terms of democracy and liberty,” she said.

Last May, French President Emmanuel Macron announced support for her candidacy as part of efforts to reinforce strained ties between France and Rwanda. His announcement was made alongside Rwandan President Paul Kagame, whose regime has been accused of human-rights abuses and assassination plots.

The Francophonie, which represents 274 million francophones around the world, is made up of countries with large populations of French speakers, but also countries such as Armenia that have historical ties to the French language. 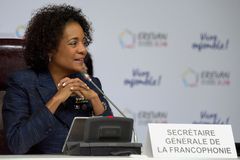