The federal government is increasing immigration targets for the next three years and will make it easier for temporary foreign workers, asylum seekers and international students to become permanent residents in a bid to reduce a shortfall in immigration owing to COVID-19.

Because of closed borders, shuttered visa offices and quarantine restrictions, Canada will take in only a fraction of the 341,000 permanent residents it expected this year.

To partly compensate for the shortfall, Ottawa plans to grant permanent resident status to some temporary foreign workers, who would normally be required to return to their home countries when their visas expire.

Under the new plan, international students at Canadian colleges and universities may be eligible to apply for permanent status immediately upon graduation, and asylum claimants who have found work and established ties to their communities, including those who crossed the Canada-U.S. border at unauthorized entry points, may also be eligible.

“We have a unique opportunity to take a look at the talent and the experience which is already within our borders – which includes workers, students, asylum seekers – who are already contributing in some very exceptional ways and in some of the most essential parts of the economy,” Immigration Minister Marco Mendicino said in an interview. He did not say when the details of the changes in how to qualify for permanent residency would be announced.

Liberal politicians have previously talked of having an intake equivalent to 1 per cent of Canada’s population, which Statistics Canada says is 38 million. That goal has never been met. Mr. Mendicino’s plan sets a target of more than 1 per cent, at least for the next three years.

Currently, 60 per cent of permanent-resident certificates are designated for immigrants who come to Canada to fill job vacancies in sectors from skilled trades to health care to technology. Others come to reunite with family members or as refugees.

The present system grants only work permits to international students after graduation and they can apply for permanent residency with priority later.

Immigrants are needed to reduce labour shortages in Canada and to pay taxes to help sustain health care and other services. But the pandemic forced Canada to close its borders to all non-essential travellers. Overseas visa offices closed and many people overseas who had been issued permanent-resident certificates had difficulty finding a flight. Those who made it to Canada were required to quarantine.

As a result, the number of permanent resident certificates issued has slowed. The new measures are intended at least partly to increase those numbers by offering permanent residency, which is a step toward citizenship, for those already in Canada who might otherwise not qualify.

“We’ve got an opportunity now to reimagine these temporary pathways and transition them into broader pathways and faster pathways to becoming Canadians,” Mr. Mendicino said.

Immigration and refugee experts welcomed the move to grant permanent residency to those already in the country.

Janet Dench, executive director of the Canadian Council for Refugees, said her organization has urged the government to give permanent residency to those in Canada.

“What we need to see is that realization actually reflected in actual operations, actual policies, because at this point, the way the Immigration Department is working is running in completely the opposite direction,” she said.

Opposition MPs took aim at the way the government has handled immigration throughout the pandemic and questioned how the new targets would be achieved.

Conservative immigration critic Raquel Dancho said the government is announcing new levels without a plan for how they will be safely implemented.

Jenny Kwan, immigration critic for the NDP, said she believes the numbers are “a bit of a hoax” because the backlog to process applications is so great that the targets will be hard to meet.

Christine Normandin, the Bloc Québécois immigration critic, said in French that Ottawa is taking the opposite approach to the Quebec system. She said the province takes only as many immigrants as it can process in one year, while Ottawa sets goals without taking into account its capacity to do the paperwork.

The contentious loophole in a Canada-U.S. immigration border pact
3:35
October 10, 2019 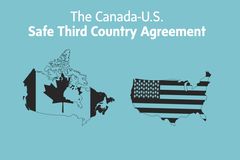 Follow John Ibbitson and Janice Dickson on Twitter @JohnIbbitson @janicedickson
Report an error Editorial code of conduct
Due to technical reasons, we have temporarily removed commenting from our articles. We hope to have this fixed soon. Thank you for your patience. If you are looking to give feedback on our new site, please send it along to feedback@globeandmail.com. If you want to write a letter to the editor, please forward to letters@globeandmail.com.
Comments