The Canadian government is backing Taiwan’s effort to gain an invitation to a major gathering of civil-aviation authorities from around the world that is taking place in Montreal later this month.

Taiwan, which helped found the ICAO, has been shut out of the body since the early 1970s when the UN voted to recognize the People’s Republic of China as the representatives of China to the United Nations.

But Taiwan, a self-governing island that Beijing considers a wayward province, says it needs to attend the ICAO’s 40th triennial assembly that begins in Montreal on Sept. 24 in order to properly administer the airspace above its territory. Authorities in Taiwan responsible for the Taipei Flight Information Region provide air-traffic control services to nearly 70 million passengers each year.

Scott Simon, holder of the co-chair in Taiwan studies at the University of Ottawa, said China has successfully campaigned to have Taiwan excluded from the ICAO. The island was officially invited to attend the 2013 assembly, but this was not renewed after Tsai Ing-wen took office as president of Taiwan in 2016. Ms. Tsai has had a more strained relationship with Beijing than her predecessor.

The Canadian government, responding to a question from The Globe and Mail, said it supports inviting Taiwan to the Montreal assembly.

“Canada supports Taiwan’s meaningful participation in international organizations where there is a practical imperative and where Taiwan’s absence is detrimental to global interests,” John Babcock, a spokesman for the department of Global Affairs, said. The department’s language was careful not to suggest it supports full membership in the ICAO.

Professor Wenran Jiang with the University of British Columbia’s School of Public Policy and Global Affairs said he is not familiar with the details of the ICAO dispute, but urged Ottawa to be careful that it doesn’t further exacerbate tensions with Beijing.

The risk Canada runs is that China perceives the Trudeau government move as negative toward China, he said – as happened when Ottawa voiced support for Hong Kong’s pro-democracy protesters.

“We need to make fairly accurate calls ... and not to further deteriorate [relations] or be perceived that we are supporting Hong Kong protests or supporting Taiwan’s broader role,” Prof. Jiang said. “If Canada’s move is perceived as hostile … than I think our relationship would be further worsened.”

China’s embassy in Ottawa said when it comes to international organizations only the People’s Republic of China speaks for China.

“On the issue of the participation of China’s Taiwan region in the activities of international organizations, including the International Civil Aviation Organization (ICAO), China’s position is consistent and clear. The issue must be handled in accordance with the One-China principle,” the embassy said in an e-mail.

Mr. Chen said “it goes without saying" that China’s behaviour amounts to bullying. “In this context, we are not part of them. They cannot control the Taipei Flight Information Region. All the air passengers rely on us.”

Global Affairs’ statement builds on what Group of Seven foreign ministers said. In an April communiqué, ministers said they “support the substantive participation of all active members of the international aviation community in ICAO forums [and that] excluding some of its members for political purposes compromises aviation safety and security."

John McKenna, president of the Air Transport Association of Canada, said it makes sense to have Taiwan at the ICAO event given the number of international flights over the island. “It’s about safety in aviation so from a strictly operational and non-political point of view, I believe Taiwan should be there." 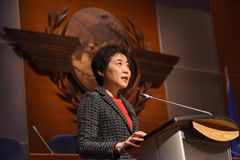 ICAO to discuss airport security and other threats at expert panel in March
November 23, 2015
UN agency ICAO bans e-cigarettes from checked baggage on airline flights
June 15, 2015
Follow Steven Chase and Robert Fife on Twitter @stevenchase @RobertFife
Report an error Editorial code of conduct
Due to technical reasons, we have temporarily removed commenting from our articles. We hope to have this fixed soon. Thank you for your patience. If you are looking to give feedback on our new site, please send it along to feedback@globeandmail.com. If you want to write a letter to the editor, please forward to letters@globeandmail.com.
Comments