Canada called for humanitarian access to Venezuela as violence erupted near the border with Brazil Friday and self-declared interim president Juan Guaido prepared an attempt to bring desperately needed aid into the country amid a blockade by President Nicolas Maduro.

In an interview with The Globe and Mail, International Development Minister Marie-Claude Bibeau said Canada will keep a close eye on the situation in Venezuela this weekend after troops opened fire on civilians Friday, killing one and injuring several others. The use of force sets the stage for a potentially violent showdown between Mr. Maduro’s regime and Mr. Guaido, who will lead an opposition convoy to the Colombian border Saturday in an attempt to transport tons of humanitarian aid into Venezuela.

“We hope there will not be violence around this situation because we have to recognize that there are people in need in Venezuela,” Ms. Bibeau said.

In a tweet Friday, Foreign Affairs Minister Chrystia Freeland reiterated Canada’s concerns over reports of violence at the Venezuela-Brazil border and urged “unrestricted access for humanitarian assistance to the Venezuelan people.” Canada, along with dozens of other countries, including the United States, has publicly backed Mr. Guaido, who swore himself in as interim president of Venezuela last month in a direct challenge to President Maduro.

However, Ms. Bibeau said she is concerned the humanitarian aid is being “politicized” in Venezuela. She said it is important that the delivery of aid remain as “neutral and independent as possible” as Mr. Guaido prepares to move U.S.- and Colombian-supplied food and medicine into Venezuela.

Canada recently announced $53-million in aid for Venezuelans affected by the crisis, but the majority of the money will go to non-governmental organizations in bordering countries, such as Brazil and Colombia, where millions of Venezuelan refugees have fled. Given how difficult it is to deliver aid in Venezuela under the Maduro regime, which has a long-term policy of refusing foreign aid, only $2.5-million to $2.6-million is actually destined for organizations inside the country.

Mark Lowcock, head of the United Nations Office for the Coordination of Humanitarian Affairs, said that while UN agencies, such as the Pan American Health Organization and UNICEF, can only operate in Venezuela with the permission of the Maduro regime, they refuse to “compromise on our principles of neutrality, independence and impartiality.”

Speaking to The Globe, Mr. Lowcock said the UN would consider transporting aid across the borders of neighbouring countries into Venezuela, as Mr. Guaido is attempting to do this weekend, but only if all sides are on board.

“If everybody agrees that one of the ways to get assistance into Venezuela is across border … then of course from the UN’s point of view that’s fine. But at the moment, there doesn’t appear to be an agreement on that,” Mr. Lowcock said.

The attempt to get humanitarian aid into Venezuela continues to divide the international community. As Guaido allies, such as Canada, the United States and Britain, call for humanitarian access to Venezuela, a Russian Foreign Ministry spokesperson said Friday that the convoy is creating a pretext for removing Mr. Maduro. Russia, China, Turkey and Iran continue to back Mr. Maduro, whose regime has been accused of committing crimes against humanity.

The rising tensions in Venezuela come as the Lima Group prepares to meet in Bogota, Colombia, Monday. The alliance of countries, which includes Canada, is working to find a peaceful resolution to the Venezuelan crisis. The group will hear from U.S. Vice-President Mike Pence, who will join the meeting to discuss the Venezuelan crisis (the United States is not a member of the Lima Group). Ms. Freeland will also attend.

The United States and Venezuela have also reached an agreement to extend the stay of U.S. diplomats in Caracas. U.S. officials say the agreement will allow the diplomats to remain in Venezuela for another 30 days. The United States reduced its staff at the Caracas embassy to a bare minimum but said it had no plans to close the mission. An interim arrangement allowing that was due to expire on Monday. 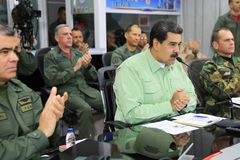 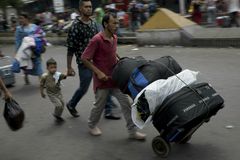