Canada says it is “deeply disturbed” by reports of a Chinese government birth-control campaign targeting Uyghurs and other Muslim minorities.

In a statement to The Globe and Mail, Foreign Affairs Minister François-Philippe Champagne’s office expressed concern about a recent report by the Associated Press detailing China’s systematic efforts to slash birth rates among the Uyghur minority, which some experts have decried as a possible form of genocide. Canada is adding its voice to the growing choir of calls for China to end its repression in the Xinjiang region.

The Chinese government regularly subjects minority women to pregnancy checks, forced intrauterine devices, sterilization and abortion, according to the investigation.

“Canada is deeply disturbed by these reports and condemns all use of forced population controls. As we have said both in public and in private, the human-rights situation faced by Uyghurs and other minorities in China is deeply concerning and growing worse,” said Adam Austen, Mr. Champagne’s spokesperson.

Canada’s reaction comes four days after a statement from U.S. Secretary of State Mike Pompeo, who called on the Chinese Communist Party to immediately end the “horrific” practices and urged other countries to support the American demand.

While individual Uyghur women have spoken out about forced birth control, the AP investigation found that the practice is more widespread than previously understood. The hundreds of millions of dollars the Chinese government pours into birth control has transformed Xinjiang from one of China’s fastest-growing regions to one of its slowest in just a few years, according to new research obtained by AP in advance of publication by China scholar Adrian Zenz.

The report also found that the population-control measures are backed by mass detention as a threat and punishment for failure to comply. As the Chinese government cracks down on Uyghurs, it is encouraging some of the country’s Han majority to have more children.

Britain’s ambassador to the United Nations office in Geneva, Julian Braithwaite, led a group of 27 countries, including Canada, in reiterating calls for Beijing to allow the UN High Commissioner for Human Rights access to Xinjiang, a region in the far west of China.

“A number of the signatories to this statement submitted a letter last year to express concern about arbitrary detention, widespread surveillance and restrictions, particularly targeting Uyghurs and other minorities in Xinjiang. These deep concerns have been reinforced by additional information now in the public domain,” said Mr. Braithwaite said in a speech on Tuesday.

The Inter-Parliamentary Alliance on China, a group of Canadian, American, European, Australian and Japanese politicians, issued a statement this week urging an independent UN probe to determine whether crimes against humanity or genocide had taken place in Xinjiang. The U.S. Commission on International Religious Freedom echoed those calls, saying the campaign “might meet the legal criteria for genocide.” 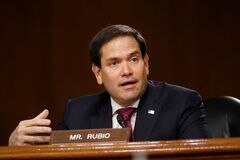 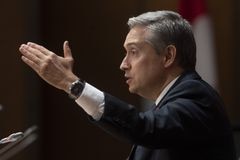 Trump says he held off sanctions on China over Uyghur crackdown due to trade talks
Subscriber content
June 21, 2020 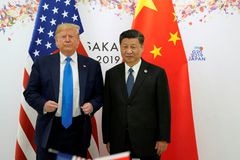