Four years ago, Michaëlle Jean, the Haitian refugee who became Canada’s governor-general, was touted as a kind of shiny Canadian innovation for the Francophonie. Now she’s an expensive luxury.

Her tenure as secretary-general of the Organisation internationale de la Francophonie has been dogged by reports that the former governor-general of Canada was indulging regal tastes.

There was a $500,000 renovation for the Paris apartment put at her disposal, a $20,000 grand piano to put in it, a chauffeur and car for her husband, Jean-Daniel Lafond. France’s l’Opinion newspaper reported her entourage spent $50,000 in four days at New York’s Waldorf Astoria hotel.

Ms. Jean has argued her expenses were for the good of the Francophonie, or even part of a disinformation campaign against her. The Canadian government defended her, and endorsed her bid to keep the job.

But as the representative of an organization whose 57 members include some of the poorest countries in the world, the allegations were giving her a Marie Antoinette reputation.

And now, she can no longer escape the guillotine, anyway.

Her tenure as secretary-general is doomed. France and some African members of the organization have already settled on a replacement. There’s no reason for Prime Minister Justin Trudeau’s Liberal government to keep supporting her bid to stay.

“Although it’s difficult for me to understand that she would spend $20,000 for a piano, if she can say, well, we receive queens and monarchs at the organization and we have to have that kind of piano, well, maybe we could understand,” Mr. Clarke said. “I would not agree with her, but there might be some explanations. I want to hear them.”

Her tenure was supposed to be something new. The secretary-general’s post had previously gone to an African, because African countries make up the bulk of the Francophonie membership. But in 2014, the African members were divided. Quebec Premier Philippe Couillard and then-prime minister Stephen Harper decided to support her candidacy.

Ms. Jean’s personal story, as a Haitian refugee who came to Canada and eventually became governor-general, was compelling. After Rideau Hall, she served as UNESCO’s ambassador to Haiti. She was a compromise candidate supposed to symbolically bridge the divide between richer and poorer countries.

Typically, an incumbent in her job might expect to get a second mandate when Francophonie nations hold a summit in Armenia in October.

But last week, France’s President, Emmanuel Macron, publicly endorsed someone else, Rwandan foreign minister Louise Mushikiwabo. It was a sign that Ms. Jean’s time is up.

Jocelyn Coulon, of the University of Montreal’s Centre for International Research and Studies, who was an adviser to former foreign affairs minister Stéphane Dion, said Mr. Macron’s endorsement of a Rwandan is part of his initiative to strengthen ties in Africa.

He’s seeking to ease a decades-long rift with Rwanda, which has accused France of playing a role in the country’s 1994 genocide. The rapprochement was brokered by Morocco’s King Mohammed VI, whose country is a major investor in Francophonie countries.

Mr. Macron’s endorsement, Mr. Coulon said, was a very public sign the Rwandan foreign minister had the support of the Francophonie’s largest funder, France, and wide backing in Africa.

The only thing left now for Ms. Jean, in Mr. Coulon’s words, is to bow out “as elegantly as possible.”

That’s politics. But in the diplomatic world, it’s hard to imagine Ms. Jean would be swept out unceremoniously if member states had been happy with her tenure.

Mr. Coulon said after Ms. Jean won the post, “the graft never took” between her and the Francophonie. She didn’t build support among leaders of Francophonie countries.

Even her sponsors, the governments of Canada and Quebec, seemed to find some of her ventures to be more smoke than substance – they turned down a request for $400,000 to bail out a project to send 100 young francophones on a cruise on a replica of an old frigate, the Hermione.

And now, there’s no reason, diplomatic or otherwise, for Canada to keep bailing out Ms. Jean. For transparency’s sake, her expenses should be explained. Then it’s time to admit her ship has sailed. 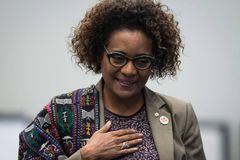