The Canadian government encouraged its diplomats in Venezuela last year to continue to defend and promote human rights, despite pressure from President Nicolas Maduro’s regime to back off, a secret report reveals.

In a 27-page report on Venezuela, Global Affairs Canada detailed the “critical state” of human rights in the South American country, including extrajudicial killings, sharp rises in poverty, hunger and illness, and crackdowns on protesters, activists and journalists. The 2017 human-rights report recommended the Canadian embassy in Caracas continue to support human rights in Venezuela, while acknowledging the challenging political environment under the Maduro regime.

“Canada should maintain the embassy’s prominent position as a champion of human-rights defenders,” the report concluded.

Although partially redacted, another recommendation said Canada should “develop and implement strategies to minimize the impact of attacks by the government in response to Canada’s human rights statements and activities.”

Canada’s most recent ambassador to Venezuela, Ben Rowswell, oversaw the report while serving in Caracas. In an interview with The Globe and Mail, he said the Venezuelan government “attacks” did not pose a physical security threat to embassy staff. Rather, he said the report was referring to personal attacks on western diplomats in state-sponsored media reports and occasional criticism from the Maduro government over Canada’s position on Venezuela.

The report was obtained by researcher Ken Rubin through the Access to Information Act and provided to The Globe and Mail.

Mr. Rowswell, who served as ambassador from March, 2014, to July, 2017, said the report depicts the deterioration of human rights and democracy under Mr. Maduro’s grip on power.

“The degree and the systematic nature of the abuse of human rights in Venezuela required this kind of detailed analysis and merited the kind of tone that’s in this report,” said Mr. Rowswell.

During his time as envoy, Mr. Rowswell said Canada was just as tough on the Venezuelan government in private as it was in public. Foreign Affairs Minister Chrystia Freeland has issued numerous strongly worded statements condemning the role of the Maduro regime in the ongoing political and economic crisis, and imposed economic sanctions on dozens of Venezuelan officials.

Mr. Rowswell said Canada was one of the first countries in the Americas to denounce the human-rights situation in Venezuela. As other countries joined the chorus of criticism, the Maduro government turned up the pressure.

Mr. Rowswell recounted how Delcy Rodriguez, then Venezuela’s foreign minister, would haul all of the Caracas-based ambassadors into a room and reprimand them over their governments’ policies towards Venezuela. Ms. Rodriguez, who was named the country’s Vice-President in June, was among 40 senior Venezuelan government officials, including Mr. Maduro, targeted by Canadian economic sanctions last year for their role in the Venezuelan crisis.

“[Ms. Rodriguez] would call all of the ambassadors together in a room – there would be 70 of us there – and then she would lecture us for an hour and a half about what bad diplomats we’re being,” Mr. Rowswell said.

“No matter what our positions were on human rights, we would all be rounded up and then yelled at.”

Canada has not had an ambassador in Venezuela since Mr. Rowswell left the posting last year; he took a leave from Global Affairs Canada to co-found a Toronto-based tech startup.

The Canadian and Venezuelan embassies are now represented by chargé d’affaires – as opposed to ambassadors – following a diplomatic tit-for-tat late last year that saw both governments expel senior diplomats from each other’s countries.

“This is accomplished directly with Venezuelan government officials with whom we have maintained lines of communication despite having downgraded our bilateral relationship and restricted our engagement,” Ms. Mills said in a statement.

Luis Acuna, Venezuela’s charge d´affaires in Ottawa, says the Maduro government has repeatedly protested Canada’s “biased stance” against the Maduro government. He said that if Canada is truly concerned about the rights of Venezuelans, it should oppose the economic sanctions the United States imposed in August, 2017.

“Millions of dollars used for the purchase of food, medicine and other basic goods for Venezuela are being blocked by unilateral measures aimed at destabilizing the Venezuelan economy,” Mr. Acuna said in an e-mail.

Earlier this month, the Associated Press reported that President Donald Trump in August, 2017, asked his top aides why the United States couldn’t just invade Venezuela in an effort to deter the threat to regional security. Mr. Rowswell said speculation of a military invasion is the “single greatest gift” to the Maduro regime.

“As well as being complete fantasy and utterly ridiculous, it was possibly the stupidest diplomatic move a President of the United States could ever make with relation to any Latin American country. It was the depths of diplomatic self-destruction,” Mr. Rowswell said. 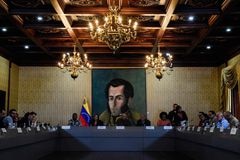 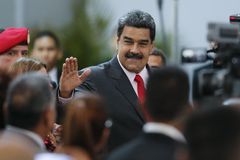 Canada downgrades diplomatic ties with Venezuela after controversial election
May 21, 2018 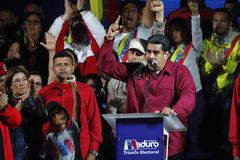