Canada has joined major allies including the United States and Britain in identifying China as the country responsible for a state-sponsored hacking campaign to steal data from military service members, government agencies and private companies in the United States and nearly a dozen other countries.

Canada’s statement from the Communications Security Establishment was not as strong as the disapproval registered by some allies. The Americans called it “outright cheating and theft,” the British said China must stop what it called “the most significant and widespread cyber intrusions against the U.K. and allies uncovered to date” and the Australians expressed “serious concern” about Beijing’s “intellectual property theft.”

The Communications Security Establishment, for its part, merely named China as responsible, saying that it is “almost certain that actors likely associated with the People’s Republic of China (PRC) Ministry of State Security (MSS) are responsible for the compromise … beginning as early as 2016."

The international censure of China comes amid increasing diplomatic tension with Canada over potential Chinese state influence in this country’s networks. Ottawa has been weighing whether to allow China’s flagship tech company, Huawei Technologies, to supply gear for next-generation 5G mobile networks. Chinese law requires companies in China to “support, co-operate with and collaborate in national intelligence work” as requested by Beijing. Three of Canada’s closest military and intelligence allies – the United States, Australia and New Zealand – have already barred Huawei from these future networks for national security reasons.

U.S. officials in Washington on Thursday accused two Chinese citizens acting on behalf of China’s main intelligence agency of leading the hacking operation. The two Chinese citizens in this global hacking campaign are accused of breaching computer networks in a broad swath of industries, including aviation and space, banking and finance, oil and gas exploration and pharmaceutical technology. U.S. prosecutors say they also compromised the names, Social Security numbers and other personal information of more than 100,000 U.S. Navy workers.

All told, U.S. prosecutors say, the alleged hackers – identified as Zhu Hua and Zhang Shillong – stole “hundreds of gigabytes” of data, breaching computers of more than 45 entities in 12 states. They are not in custody.

It was the latest in a series of U.S. Justice Department indictments targeting cyber espionage from Beijing.

Britain, meanwhile, said in supporting this hacking, China has broken international commitments including a deal it signed with Britain in 2015 to end state-directed cyber espionage of industrial targets. China has also previously pledged in separate deals with Canada and the United States to end state-sponsored theft of private-sector secrets.

This hacking goes "against the commitments made to the U.K. in 2015, and, as part of the G20, not to conduct or support cyber-enabled theft of intellectual property or trade secrets,” the British Foreign and Commonwealth Office said.

Canada’s Public Safety Minister Ralph Goodale, asked if this means China has broken the terms of the anti-cyber-espionage agreement it signed with the Trudeau government, suggested Beijing had.

“Obviously, we are deeply disappointed if a commitment made in the past has been violated, and we think it is important to point out when that occurs,” Mr. Goodale said of the 2017 agreement where China pledged to Mr. Trudeau that it would stop conducting state-sponsored cyberattacks to steal Canadian private-sector trade secrets and proprietary technology.

Mr. Goodale declined to name the Canadian firms that were victims of this hacking, citing commercial confidentiality. He couldn’t say what was stolen, but said material that might have been purloined included financial records, commercial secrets or business strategies.

Asked whether Canada was preparing sanctions against China, Mr. Goodale said Canada’s relationship with China was large, long-standing and complex. He said Canada will “strive as much as we possibly can to have good relations with all countries including China,” but said it’s important to speak out about behaviour not consistent with “rules based international order” to deter further contraventions.

The Chinese embassy in Canada did not immediately respond to a request for comment.

Canada is right now embroiled in a separate diplomatic conflict with China over Huawei. Canadian authorities arrested Meng Wanzhou, an executive from the flagship tech firm, to fulfill a U.S. request. China has arrested two Canadians in apparent retaliation, accusing them of engaging in activities that endanger national security.

Against the backdrop of an increased focus on cyber threats from China, Huawei is trying to persuade Western countries to let it supply gear for next generation mobile networks. Huawei Technologies Canada has written the watchdog Canadian Centre for Cyber Security pledging to do whatever is required to meet security standards for 5G networks.

U.S. law enforcement officials described the latest case as part of a trend of state-sponsored hackers breaking into American networks and stealing trade secrets and confidential and valuable information. More than 90 per cent of Justice Department economic espionage cases over the past seven years involve China, said Deputy Attorney-General Rod Rosenstein, and more than two-thirds of trade secrets cases are connected to the country.

“China’s state-sponsored actors are the most active perpetrators of economic espionage,” FBI director Chris Wray said on Thursday in announcing the case. “While we welcome fair competition, we cannot and will not tolerate illegal hacking, stealing or cheating.”

Last week, officials from the Justice Department, the FBI and the Department of Homeland Security told the Senate judiciary committee that China is working to steal trade secrets and intellectual property from U.S. companies to harm America’s economy and further its own development. Those efforts have continued even after Beijing committed in 2015 to halting the theft of trade secrets after a first-of-its-kind indictment that accused Chinese hackers of stealing corporate data from brand-name U.S. companies.

“We want China to cease illegal cyber activities and honour its commitment to the international community, but the evidence suggests that China may not intend to live up to its promises,” Mr. Rosenstein said.

In recent months, the Justice Department has filed separate cases against several Chinese intelligence officials and hackers. A case filed in October marked the first time that a Chinese Ministry of State Security officer was extradited to the United States to stand trial after he was arrested in Belgium, the department said.

Third Canadian detained in China is being held for working illegally, Beijing says, as arrests strike note of fear
December 20, 2018 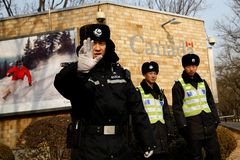 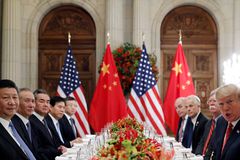